Leonardo DiCaprio was once made the iron mask famous as King LouisXIV in the forgettable film ‘The Man in the Iron Mask,’ but this one is a real antique and rare keepsake! Going under the hammer at Christie’s is a stunning rare, one-of-three Roman bronze helmet, with a face-mask discovered by a metal detector enthusiast in Cumbria. Described as a ‘hugely important discovery,’ this Crosby Garrett Helmet dated to the 1st-2nd century AD features a griffin crest in a golden bronze color. Touted to fetch as much $465,000, the other 2 Helmets, the Ribchester Helmet and the Newstead Helmet, are housed at the British Museum and the Museum of Antiquities Edinburgh, respectively. 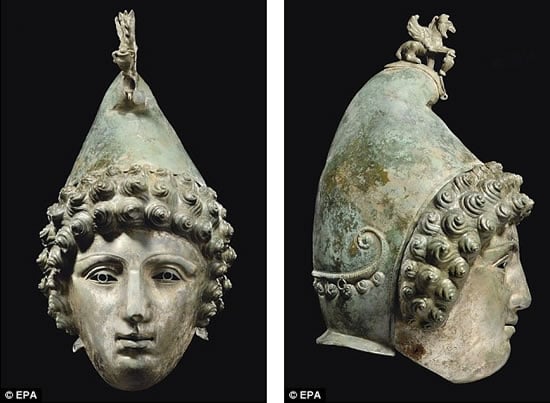