An auction is a method for determining the value of a commodity that has an undetermined or variable price like the artifacts and collections form space. This is actually an ‘out of the world’ auction! The Astronaut Scholarship Foundation’s 4th annual silent auction of astronaut-donated memorabilia and experiences will begin August 3 and continue through August 12, 2006. More than 30 astronauts have given artifacts, autographs, and memorabilia from their collections, as well as some, have volunteered to join bidders on tours, experiences and will dine with winners. Resources collected through this will be utilized to fund the educations of the next-generation U.S. explorers and scientists. The auction will end with in-person bidding at an astronaut attended dinner hosted at the UACC Convention in San Antonio, preceded by astronaut signing sessions that day. 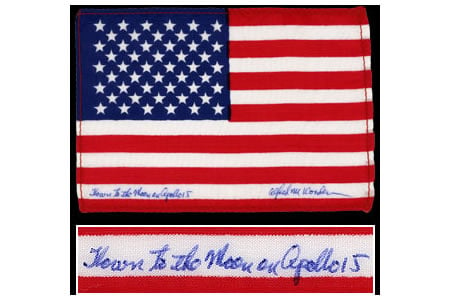 The auction begins 35 years to the day after the fourth lunar landing mission, Apollo 15, returned to Earth. The flight’s command module pilot Al Worden serves as the chairman of the Foundation and has donated two of the more than 30 lots in the auction. Bidders can choose from an American flag that flew with me to the Moon or the chance to join me scuba diving off the coast of the Bahamas,” said Worden. “These are just two examples from a long list of experiences and memorabilia that are available in this auction. Collectors and enthusiasts are sure to find something that inspires their spirit of exploration!” Other lots include:
* A private lunch with Apollo 11 moonwalker Buzz Aldrin
* A plane ride with space shuttle veteran John Blaha as your pilot
* A museum tour with Mercury astronaut Wally Schirra
* A round of golf with Apollo astronaut Charlie Duke
* A medallion was flown to the Moon from Apollo pilot Edgar Mitchell