If you’ve got many roaring bank accounts across the globe then probably you’d be hunting for places to dump some of the overflowing greens. Here’s one that I can suggest to you. If rarity and exclusivity beguile you then take a look at this rare bronze horse’s head that is likely to fetch $10 million. The statue, which belongs to a Taiwan collector, is one of 12 bronze heads of zodiac animals that graced a water-clock fountain in the old Summer Palace, or Yuanmingyuan, which was destroyed by the British and the French in 1860. The head billed as “rare and magnificent” with details such as a flowing mane, is expected to be the star of Sotheby’s autumn auction sales in Hong Kong, which start on October 9. More about the history of this 10 million dollar horse head after the jump….. 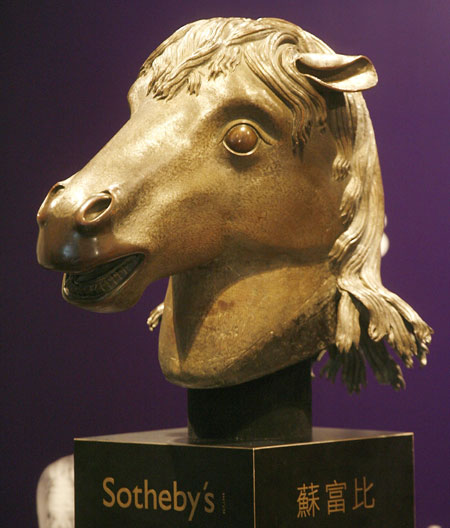 This unique bronze horse’s head was designed by Jesuit missionaries to honor the zodiac fountain of the Summer Palace (Yuanmingyuan ) during the Qing dynasty. In 1860, it was pillaged by British and French troops from a water clock in Beijing. The current owner paid around US$400,000 for the bronze relic in 1989 at a Sotheby’s auction in London, said Nicolas Chow, Sotheby’s chief of Chinese Ceramics and Works of Art. Presently, only seven heads (including ox, tiger, bear, and monkey) are being located and exhibited in a museum in Beijing. The rabbit and rat are under the personal custody of the European compilation.