Auctions are often like battlegrounds with frenzied emotions and it is hardly a novelty to watch connoisseurs fight their minds out over rare items. For once though, we heard of an extremely bizarre happening at a Geneva auction that left us pitying the fate of the final buyer. In quite a misinformed incident of sorts, an amateur buyer recently shelled out $513, 0171 (minus commission charges) for a Chinese vase, that was estimated to be sold for 10,000 times lesser its actual give away price! 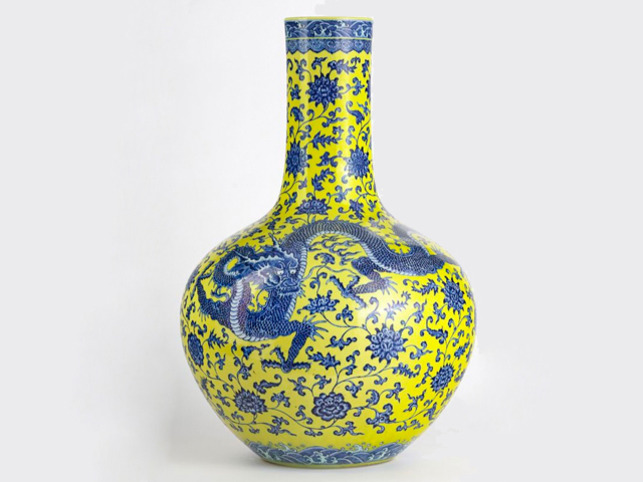 The controversial commodity as mentioned above was a Vase of Chinese origin. It boasted of three immaculately designed blue dragons against a stark background in yellow. The catalogue for the exquisite item stated that it was 23 ft. in height and belonged to the 20th century. It however, bore reference to an unverified mark from the 18th century Qianlong era that seemed to have caused the confusion.

The fact that the vase may have belonged to the 18th century ensued a battle between two passionate buyers, one of which won the bid for $6.1 million, along with commission charges. While the auctioneer also pointed out that the age of the vase was difficult to ascertain, the (ill)-fated buyer seemed to carry on with the deal. The result being a bizarre sale and a very very happy auction house!

Tags from the story
Vase