The auction that will be held by Barrett-Jackson Auction Co. on September 23-25 is sure to be one of the most power-packed sales ever. Why? Because this sale boasts of an item signed and autographed by the most powerful men of USA. Yes, the highlight of this sale is a custom-designed motorcycle signed by none other than President Barack Obama. The sale held to benefit the Fisher House Foundation that helps support military families attracts many bidders. Besides the President’s autograph, the United States Army Chopper also features other powerful men like Vice President Joe Biden and national security adviser James Jones. Incidentally, Jones’s son, Jim Jones, has donated the chopper for the auction.

Built by Hardcore Choppers of Sterling, Va., the motorcycle is dubbed the P-40 Warhawk and styled around the design of the 1950’s European race cars. The P-40 Warhawk features an Army P40 Warhawk “theme” paint job and boasts of a six-speed transmission and a 150-hp engine.
The special bike also boasts aircraft quality wiring, a dove leather seat, handmade “two into one” stainless steel exhaust, and HC “speedster” bars with internal clutch and throttle. Avon tires cover the 18″ rear and 21″ front “speedster” wheels. A bike that will surely appeal to the motorcycling enthusiast, it is truly a class apart. The fact that there is no other chopper like it will surely increase the interest of motorcycling enthusiasts.
What is more, Barrett-Jackson has waived its transaction fee for this auction. 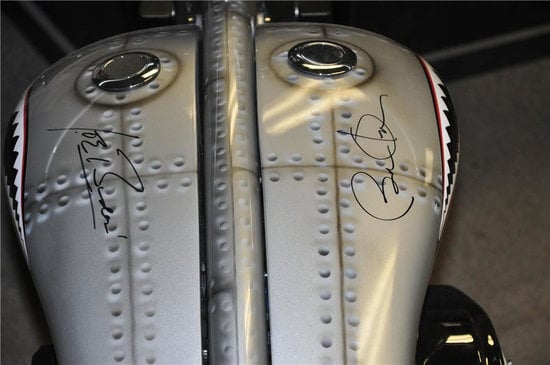