Tolkien has never been more popular and with the latest Peter Jackson epic – The Hobbit: Battle of the Five Armies – gracing the big screens only recently, Bilbo is even more popular than before and worth quite a bit for his little ole’ self; about $260,000 to be precise, on auction.

A first edition of the little halfling’s adventures written by Tolkien and presented to a student of his in 1937, sold for $260,000 at a recent Sotheby’s auction held in New York. What made the book so valuable is that not only was it in mint condition but it was personally inscribed by J R R Tolkien in old English. The passage was translated to read as – “There is many a thing in the West-regions unknown to me, marvels and strange beings, a land fair and lovely, the homeland of the Elves, and the bliss of the Gods … ” The quote is an excerpt from one of Tolkien’s unfinished works called the Lost Road. 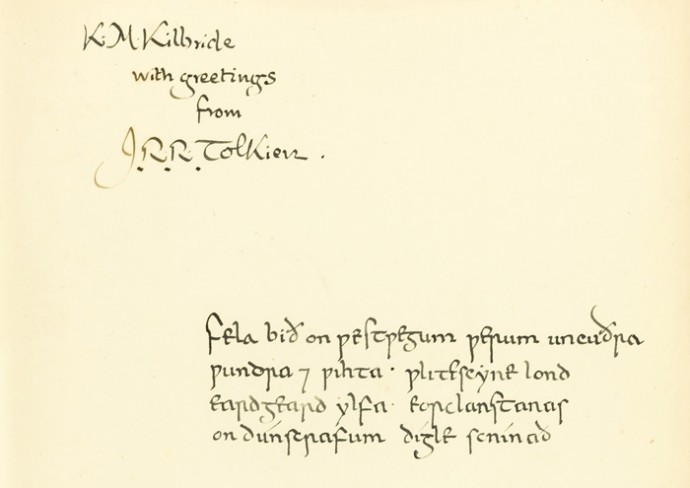 The last time an edition of The Hobbit went for an outstanding price was back in 2008 when it hit $95,000, but this is, as is, far surpassed that mark. The book was gifted by Tolkien to one Katherine Kilbride who was a student of his while he lectured at Leeds University. According to her family, Kilbride was an invalid but found great joy in corresponding with the famous author. In fact one of her letters is preserved in the Oxford Bodleian Library and a notable line from the letter reads as – “what fun you must have had drawing out the maps.”

READ:  Sotheby's has sold this gorgeous pink diamond for a record breaking $17.7 million

The inscription inside this particular copy of The Hobbit is quite rare, as his books go, and you won’t find too many copies with his signature or a personally written quote such as this.