The annual Christie’s Out of the Ordinary exhibition is a tightly curated one-off sale offering an opportunity to view and acquire unusual pieces. In its second year, the Out of the Ordinary sale will be held on 3 September 2014 and will once again feature unconventional pieces rarely seen on the market. Ranging from £500 to £120,000, the sale will comprise over 160 lots, each with an intriguing story to tell.

While the auction won’t go live until next month, here are 7 unique pieces which have caught our fancy ahead of this years’ ‘Out of the Ordinary’ Exhibition. 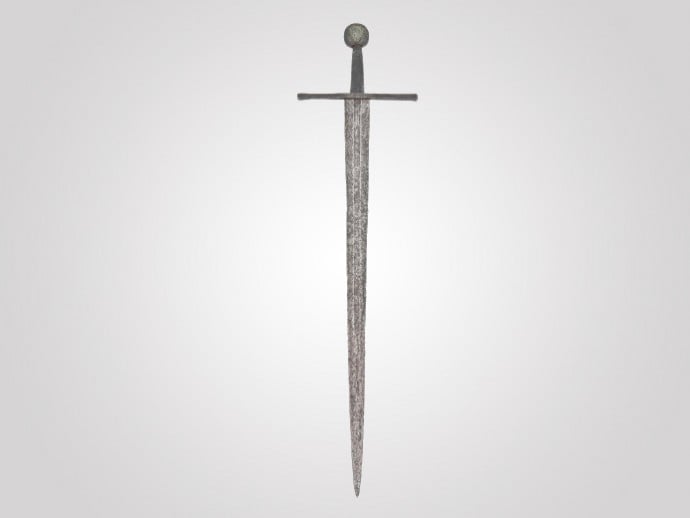 7. A Medieval Broadsword
Estimated Bid: £80,000 – £120,000 ($134,560 – $201,840)
With tapering double-edged fullered blade dating back to the mid 11th century, iron cross-guard and flattered iron wheel pommed inlaid with a copper shield on each side bearing the de Bohun coat of arms, each shield retaining traces of original gilding and enamelled inlay from 13th-14th century makes this Medieval Broadsword extremely rare. 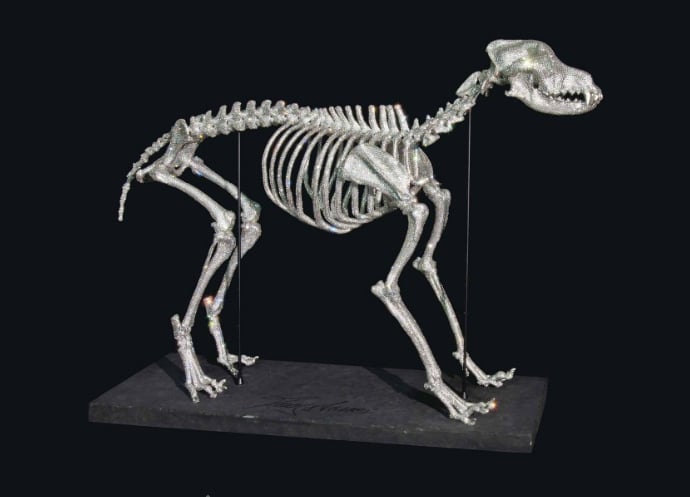 6. Swarovski encrusted skeleton of a dog
Estimated Bid: £20,000 – £30,000 ($33,640 – $50,460)
I am not sure if I would ever want to own a skeleton of a Canis lupus familiaris encrusted with Swarovski crystals but the ingenious design is worth applause. This unique artwork is by Moogstones took nine months and sixty-thousand Swarovski crystals to complete. The teeth and claws are applied with platinum, the skeleton held is in place with magnets, set on a stone plinth and a fitted box. 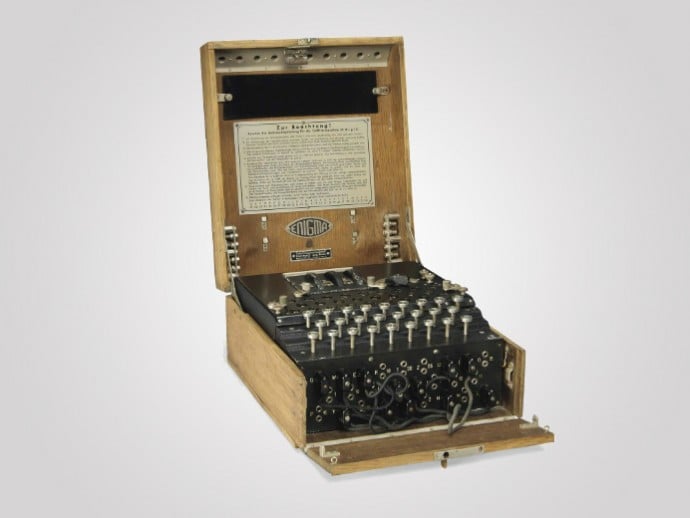 5. A three-rooter Enigma Cipher Machine
Estimated Bid: £40,000 – £60,000 ($67,280 – $100,920)
The three-rotor Enigma, the standard German electronic ciphering machine widely used in World War II. It was designed with a complex, interchangeable series of three rotors bearing the 26-character alphabet, a ‘reflector’ and a plugboard with movable connecting cords that connected pairs of letters. It has been calculated that the 3-rotor Enigma, with plugboard in use, made possible a total of 15 quintillion possible readings for each character. 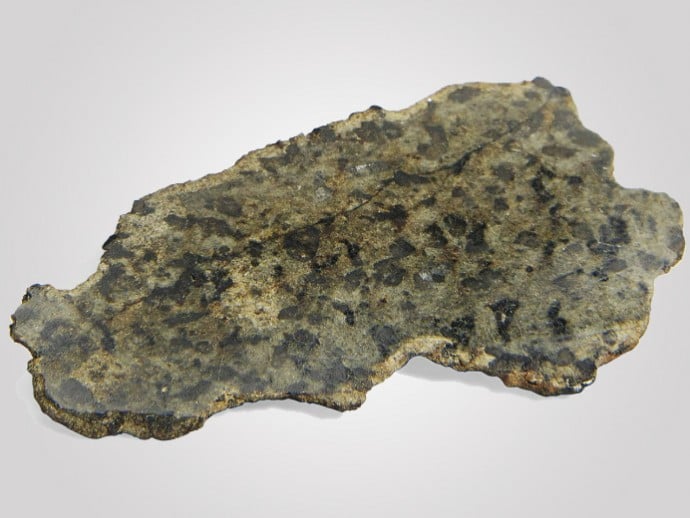 4. A Martian Meteorite
Estimated Bid: £4,000 – £6,000($6,728 – $10,092)
A slice of balsatic shergottite, Martian Meteorite originate from the surface of the planet and were ejected by an impact event later falling to Earth. The current specimen found in 1999 was first published in the The Meteoritical Bulletin no. 88 as Dar al Gani 1037, the type specimen is held at Museum für Naturkunde, Berlin. 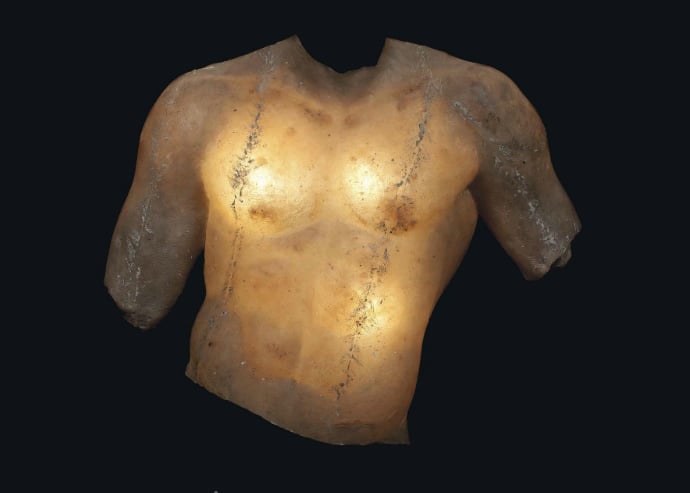 3. A large illuminated fibre-glass male torso
Estimated Bid: £2,000 – £3,000 ($3,364 – $5,046)
This 20th century fibre-glass male torso is polished with metal and is fitted with electrical fitments and four bulbs to provide illumination. Measuring 40 inches high; 53 inches wide; 12 1/2 inches deep, this artwork will be unique source of light for the home. 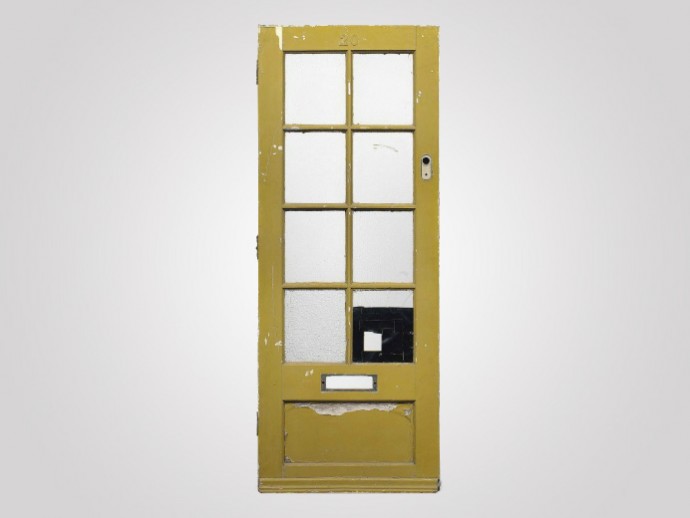 2. The Beatles/ Paul McCartney
Estimated Bid: £6,000 – £8,000($10,092 – $13,456)
Beatles fan rejoice for now you can own the wooden front door of the childhood home of Paul McCartney. The panelled wooden door with textured glass panes (one broken) was removed from 20 Forthlin Road, Allerton, Liverpool which belonged to the McCartney family in 1956. The front of the olive green painted door has a number plate 20 while the reverse is painted white with lower bolt and draught excluder. 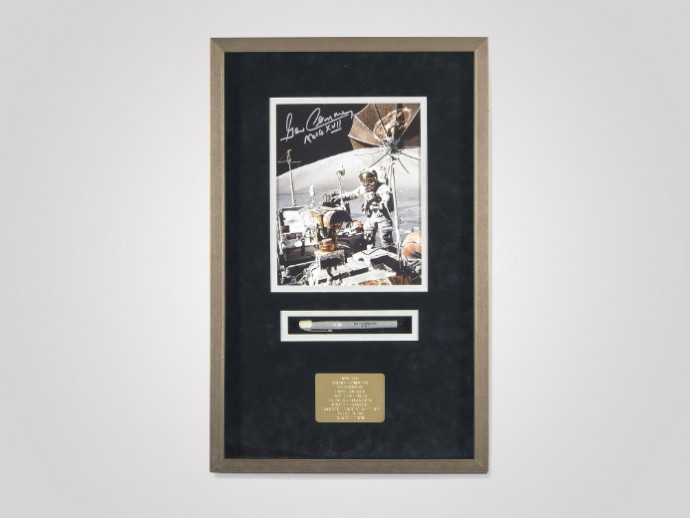 1. Pen flown to the Lunar surface on Apollo 17
Estimated Bid: £15,000 – £25,000 ($25,230 – $42,050)
While most of us can only dream of travelling to space, you can now own the Duro Marker Pen used by the astronauts as they carried out their scientific three day mission, landing on the surface of the Moon on 11 December 1972. The pen comes with signed photograph of NASA astronaut Eugene Cernan.