Think 60’s, think Beatles! Sixty years ago, two young musicians happened upon each other in Liverpool, and the Beatles were formed in 1957. The Beatles break up happened in 1970 and since then it’s been 50 years since the legendary band broke up. Sotheby’s is hosting an auction celebrating the world’s greatest pop group by offering a compelling selection that traces their journey from schooldays to global superstardom. The collection holds it all right from personal items notably a pair of John Lennon’s familiar round glasses and his detention sheet from when the late Beatle was in school, a signed copy of their first single, artwork, and more. Sotheby’s will run the sale from September 23 to October 1 on their website. Let’s revisit our ‘Beatlemania’ with our top picks from an iconic journey that spans six decades: 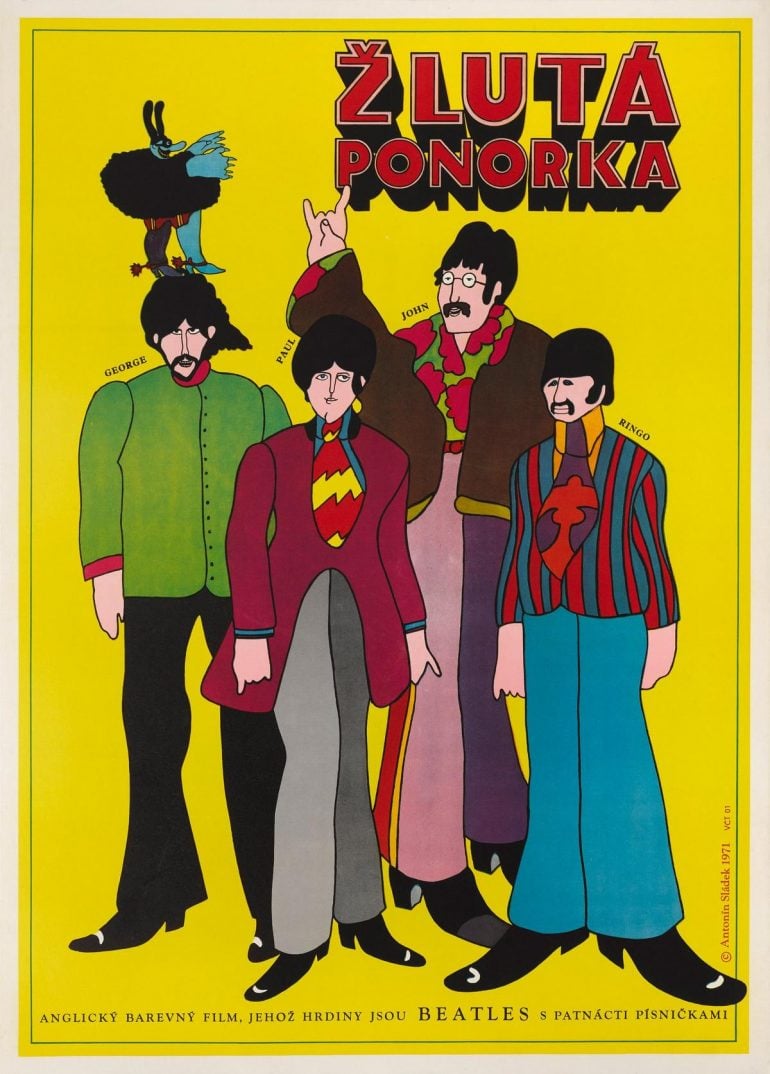 Antonin Sadek: Yellow Submarine, Czechoslovakian, 1968
Yellow Submarine, a 1968 British animated film inspired by the music of the Beatles, was directed by animation producer George Dunning and produced by United Artists and King Features Syndicate. This artwork was employed on two posters for the Czechoslovakian release of the film. It is estimated to sell for $2000. 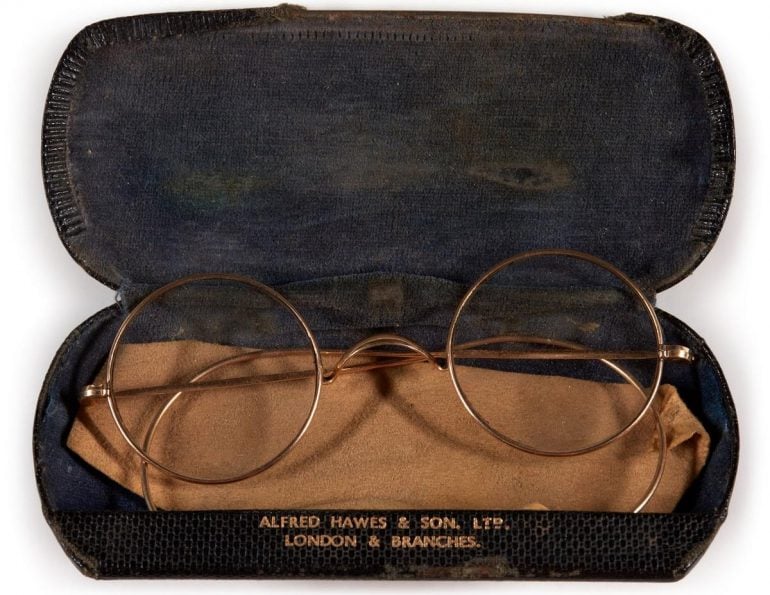 John Lennon’s pair of round Windsor spectacles
Lennon wore the round Windsor eyeglasses in public in 1966, wearing them first whilst playing Private Gripweed in Richard Lester’s film How I Won the War. He gave these glasses to the housekeeper Dorothy for her brother. It is estimated to fetch $40,000- $50,000. 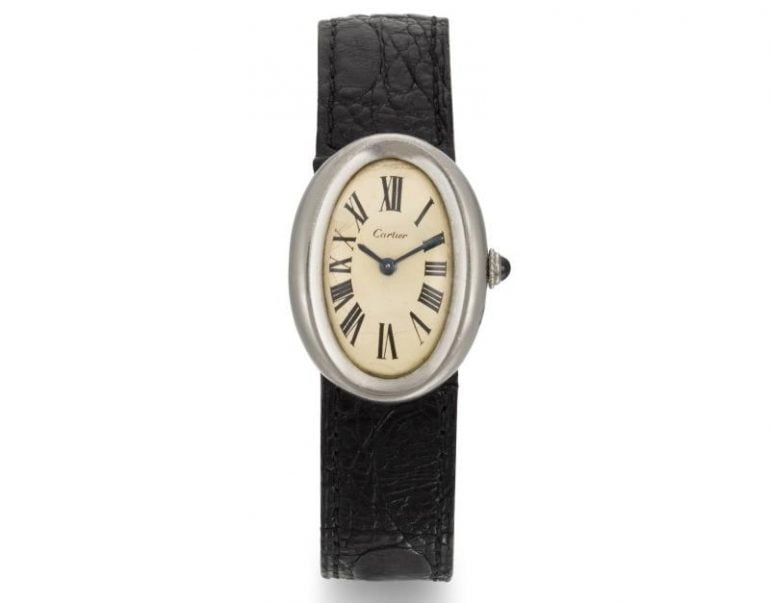 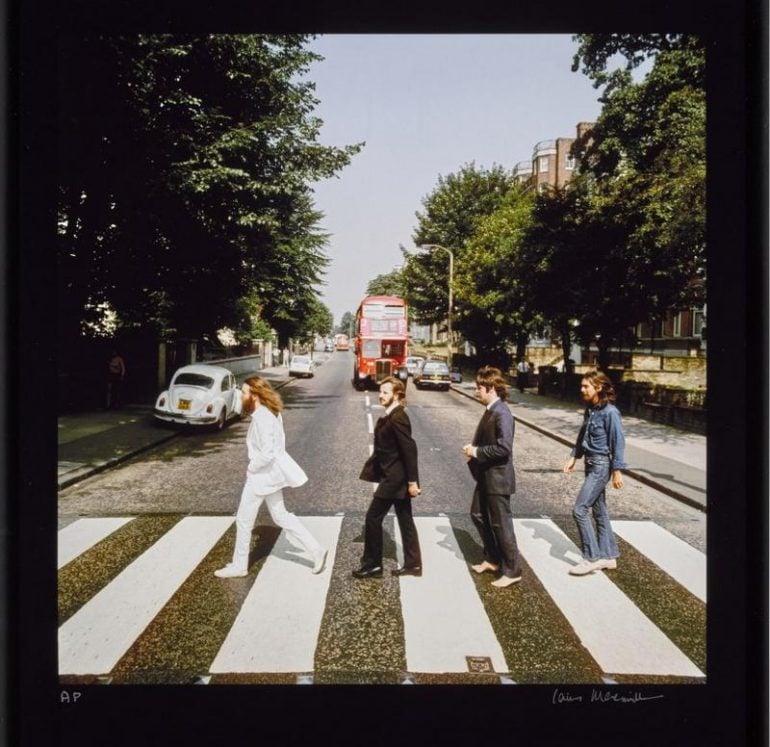 Iain Macmillan: The Beatles, Abbey Road out-take, 1969
The Scottish photographer got recognized for taking the cover photograph for The Beatles’ album Abbey Road in 1969. The chromogenic print signed and numbered AP is estimated to sell for $3000-$10,000. 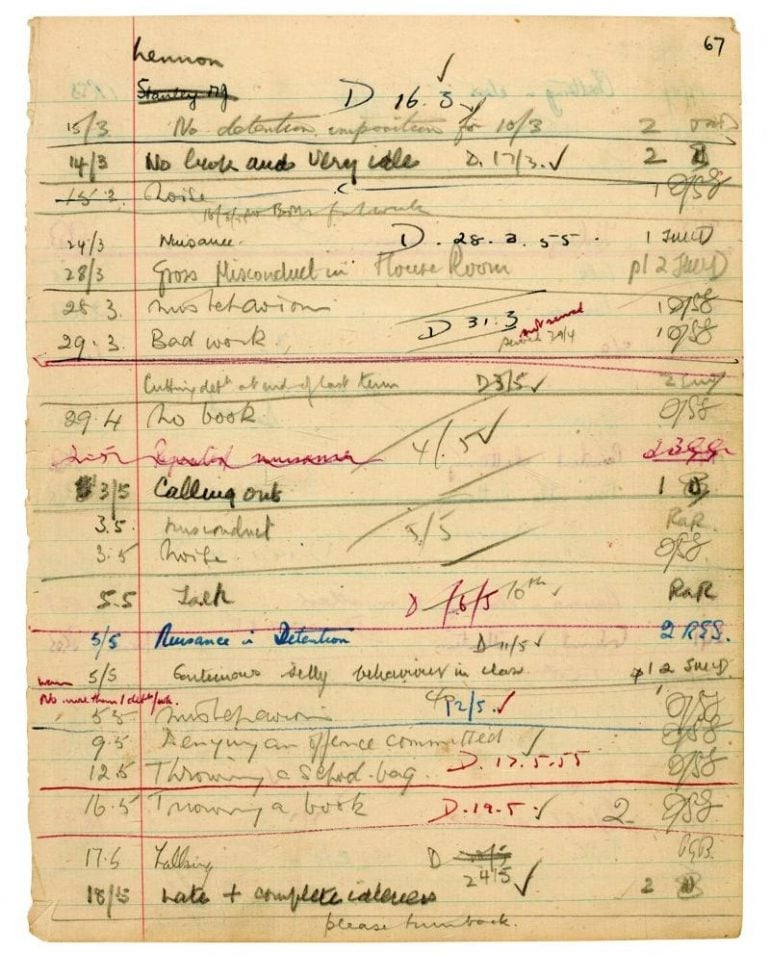 John Lennon’s school detention sheet, 1954-55
A document documenting Lennon’s misdemeanor at the Quarry Bank high school in 1954 is set to fetch between $3800-$6400. There are as many as 22 entries of complaints that read‘no book and very idle’, ‘continuous silly behavior in class’, and many more. 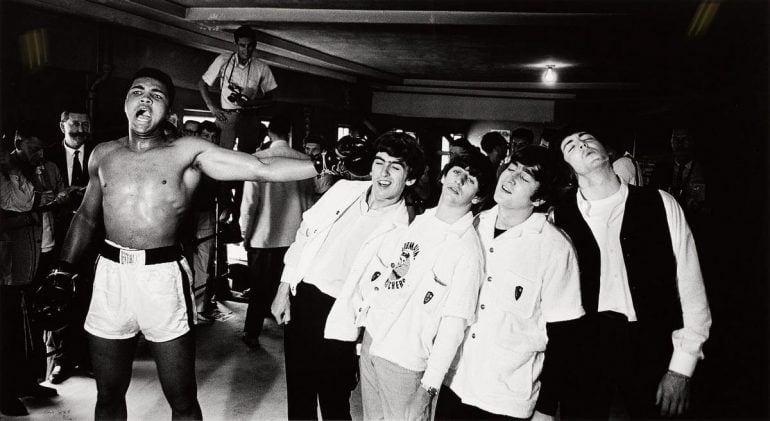 Ali and the Beatles by Chris Smith, 1964
Two of the greatest cultural icons of the 20th century come together in this mural-sized silver print, signed & numbered. It is set to knock out a sum of $13,000-$38,000 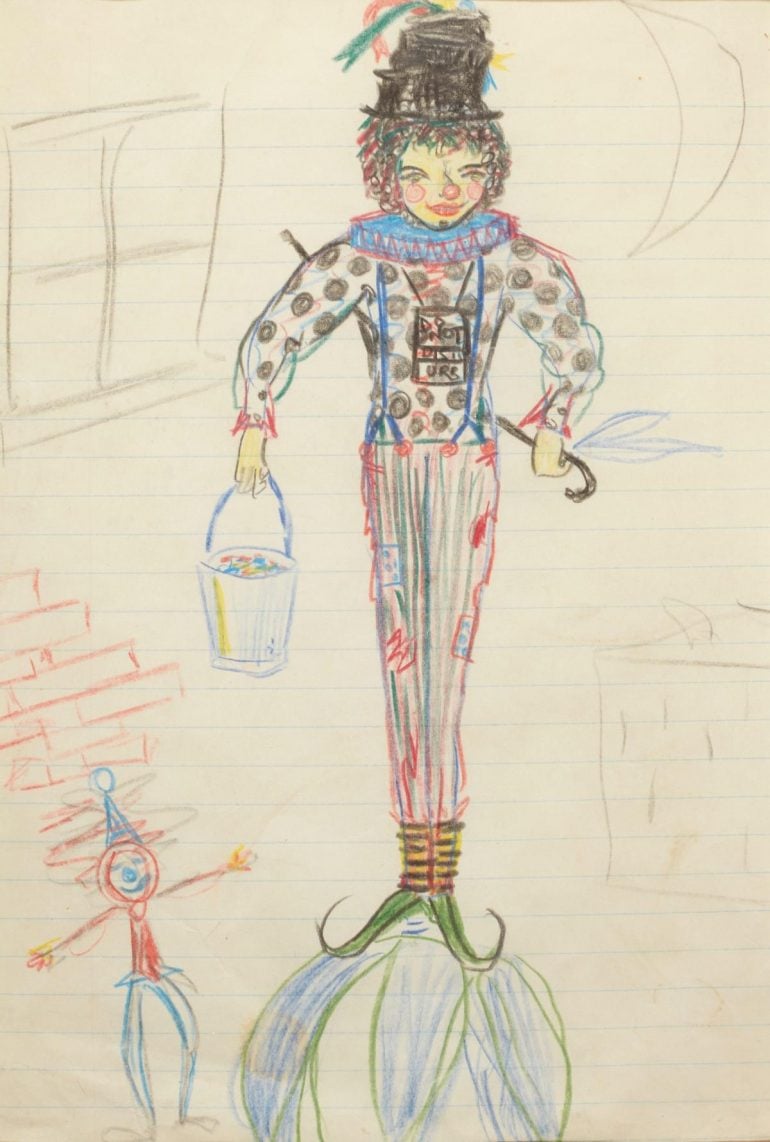 Paul McCartney’s drawing of a clown, 1975
The singing talents were certainly not replicated on paper but his idea of depicting a circus clown on a ball holding a bucket and a can is quite original. Measuring 265 x 200mm, it’s done with colored pencil on lined paper. It should be known original drawings by Paul McCartney are rare on the market. The drawing is estimated to sell for $6700-$10,000 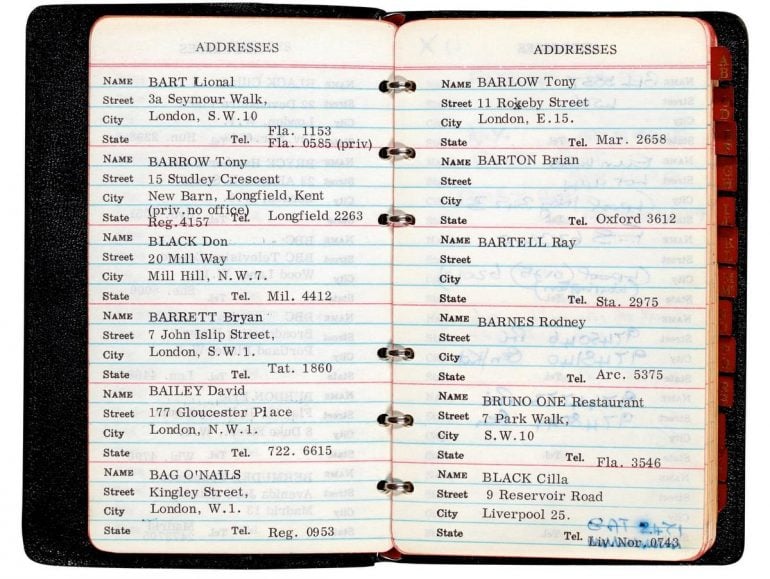 Brian Epstein’s address book, 1967
As expected, the book contains 404 mostly-typed entries giving fans a dekko at the who’s who of the Beatles circle and 1960s London. The address book also contains Epstein’s autograph, with entries including many of those closely associated with the band. It is estimated to sell for approximately $10,000. 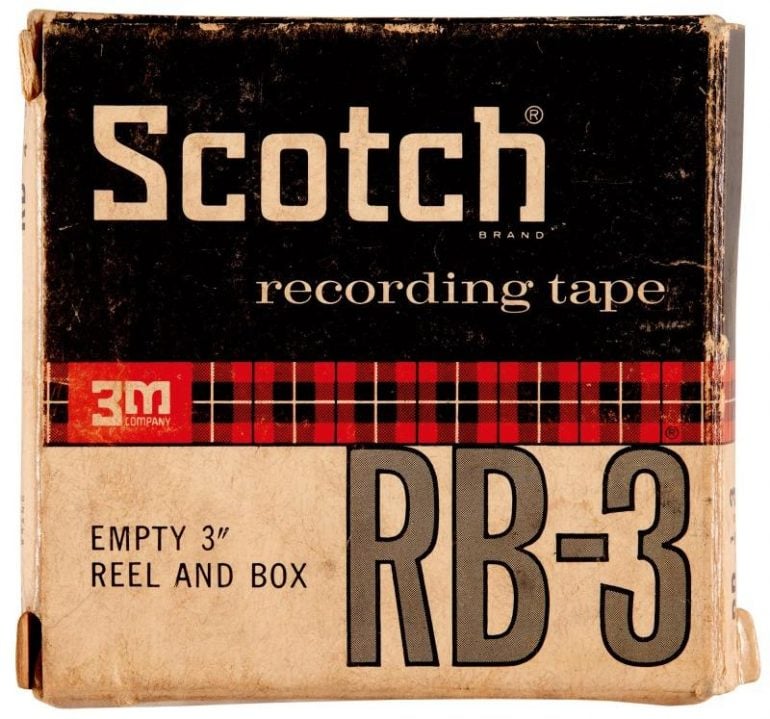 ‘Let Them Be’ scotch recording tape by Tony Sheridan.
For $1200 a Beatles fan can bring home 3-inch reel to reel tape labeled in blue ballpoint in the hand of Brian Epstein “Let Them Be”, sung and written by Tony Sheridan who also worked with the Beatles as backing on ‘My Bonnie’ in 1961. 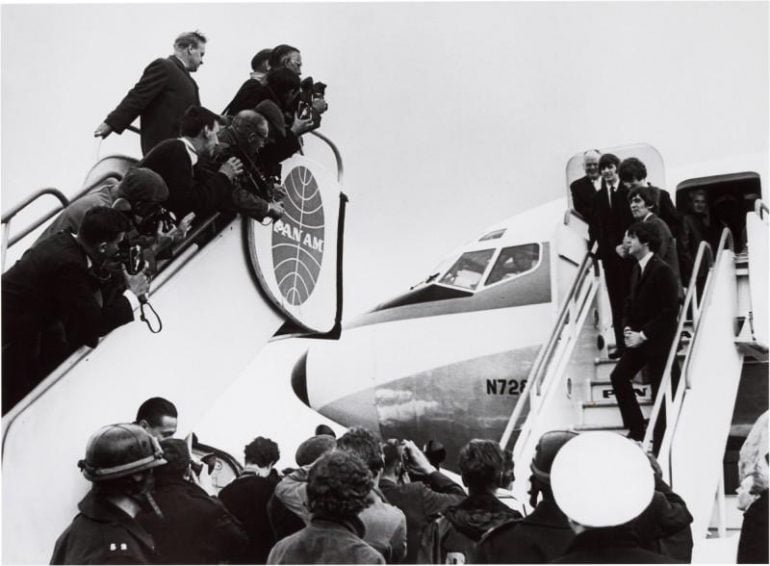 The Beatles Leaving London, Heathrow Airport, February 1964
An image that clearly captures ‘Beatlemania’, in the form of an unframed silver print, signed and numbered 8/50 in black ink in the lower margin. The Beatles are seen leaving for the US to perform at the Ed Sullivan Show. The picture can sell for an estimated amount of approximately $4500- $5800.