Tokyo’s famous Tsukiji Fish Market is set to leave its current location but it’s definitely leaving with a bang. 2016’s very first Bluefin Tuna was auctioned off at the market for the princely sum of $117,000. The winning bid was placed by Sushi restaurateur Kiyoshi Kimura who paid around 14 million yen for the 440 lbs fish. Kimura has won five New Year auctions in a row and smashed a record in 2013 with a bid of $1.76 million. Bluefin tuna is much loved in Japan and the species is currently endangered. 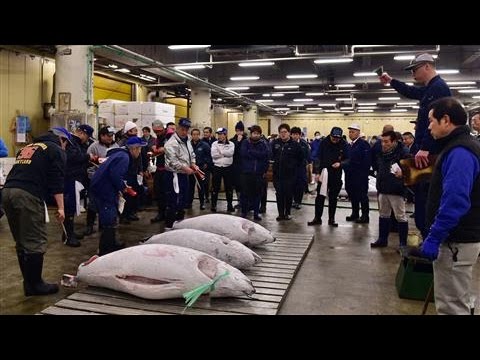 Meanwhile the fish market vendors will move to a new spot in the Toyosu district and the market will adopt a new name as well. The change in the location of the market is only one of the big changes that Tokyo’s Tsukiji district is facing as the city preps for the 2020 Summer Olympics.

Tags from the story
Food, Tokyo