Last month we posted about the JK Rowling’s latest ‘The Tales Of Beedle The Bard’ that was estimated to go for $100,000 under the hammer. But I guess that price was a tad lesser for the hammer to hit the bench. But yesterday a hefty sum of 1.95 million pounds ($3.98 million) must have forced the hammer to go down finally. The buyer is supposed to be from London dealer Hazlitt, Gooden, and Fox. The bidding lasted about 10 minutes with four or five bidders in the room and the same number on the phones. The price is the highest ever achieved at auction for a modern literary manuscript, an auction record for a work by JK Rowling, and an auction record for a children’s book.

As mentioned earlier, all the proceeds from the sale will go to The Children’s Voice, a charity Rowling co-founded in 2005 to help vulnerable children across Europe. 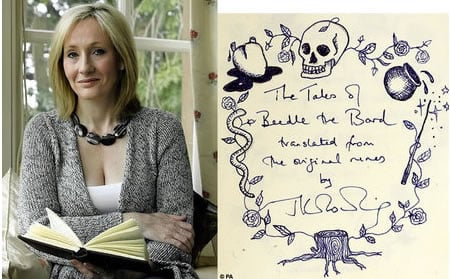