John Herbert Dillinger, the ‘legendary’ gangster of the early 19th century, has had a reputation for having robbed banks, and he’s still doing so posthumously! Don’t worry; it’s not his loitering ghost or anything; it’s his Remington .41 caliber Double Derringer pistol that’s doing so. The small pistol was said to have been found hidden in one of Dillinger’s socks when he was arrested in Tucson, Arizona, in January 1934. He was shot dead by FBI agents in Chicago in July 1934 at the age of 31. His exploitative accomplishments have inspired several Hollywood movies, including the latest blockbuster “Public Enemies,” that features Johnny Depp playing Dellinger’s role.

READ:  Letter written by Lincoln one of many items to go under hammer at Heritage Auction’s sale

The affidavits establish that the pistol was given by the then Tucson Sheriff to a probation officer and kept in the family until selling it in 1959. The anonymous owner intended to sell it because he was in declining health. The expected bids were only about $35,000-$45,000, but a private Los Angeles collector made the winning bid of $95,600. 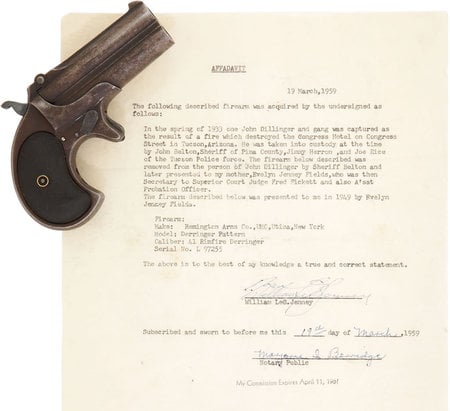