A letter written by a 7-year-old British girl and her mother aboard the Titanic, just hours before the fabled ship hit an iceberg on April 14, 1912 was auctioned to an American bidder for $200,000. What makes this letter rare is that it is the only known piece of writing on Titanic stationery, complete with its envelope embossed with the White Star Burgee. The price topped the pre-sale estimate of $168,000. The letter was written by second-class passenger Esther Hart and her daughter Eva Hart on April 14, 1912. Then 7 years old, Eva Hart was travelling with her parents, Esther and Benjamin, a master builder, to Canada, where they were to start a new life before the liner collided with an iceberg, resulting in the loss of over 1500 lives.

Eva Hart describes the poignant events of April 14, 1912 in her biography titled ‘Shadow of the Titanic’. 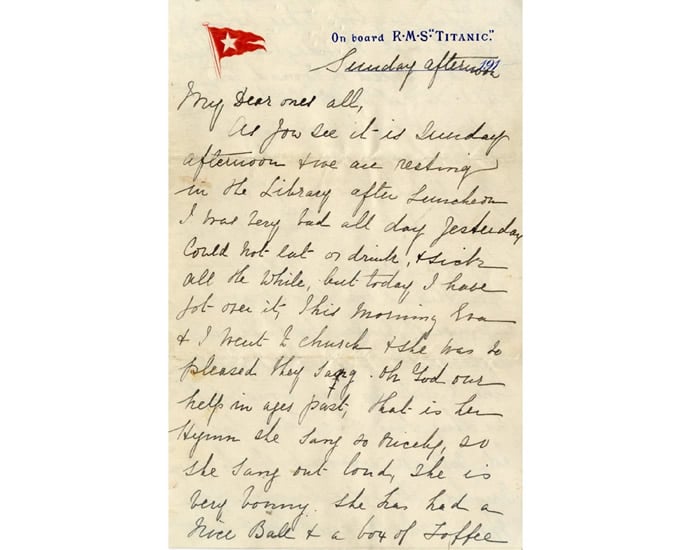 “After our very satisfying lunch, the three of us went to the library for a rest for a short time before mother left us to go to bed. She took the opportunity to write a letter to her own mother back in Chadwell Heath”. It was intended that the letter would stay with the ship to be delivered on its return journey. As it was, it was never mailed and survived the disaster with the two of us.”

“My Dear ones all, As you see it is Sunday afternoon and we are resting in the library after luncheon. I was very bad all day yesterday could not eat or drink and sick all the while, but today I have got over it. This morning Eva and I went to church and she was so pleased they sang “Oh God our help in ages past” that is her Hymn she sang so nicely. So she sang out loudly she is very bonny. She has had a nice ball and a box of toffee and a photo of this ship bought her today. Everybody takes notice of her through the Teddy Bear. There is to be a concert on board tomorrow night in aid of the Sailors’ Home and she is going to sing so am I. Well, the sailors say we have had a wonderful passage up to now. There has been no tempest, but God knows what it must be when there is one. This mighty expanse of water, no land in sight and the ship rolling from side to side is being wonderful. Though they say this Ship does not roll on account of its size. Anyhow it rolls enough for me, I shall never forget it. It is very nice weather but awfully windy and cold. They say we may get into New York Tuesday night but we are really due early Wednesday morning, shall write as soon as we get there. This letter won’t leave the ship but will remain and come back to England where she is due again on the 26th. Where you see the letter all of a screw is where she rolls and shakes my arm. I am sending you on a menu to show you how we live. I shall be looking forward to a line from somebody to cheer me up a bit. I am always shutting my eyes and I see everything as I left it. I hope you are all quite well. Let this be an all round letter as I can’t write properly to all ’till I can set my foot on shore again. We have met some nice people on board, Lucy, and so it has been nice so far. But oh the long, long days and nights. It’s the longest break I have ever spent in my life. I must close now with all our fondest love to all of you. From your loving Ess”. 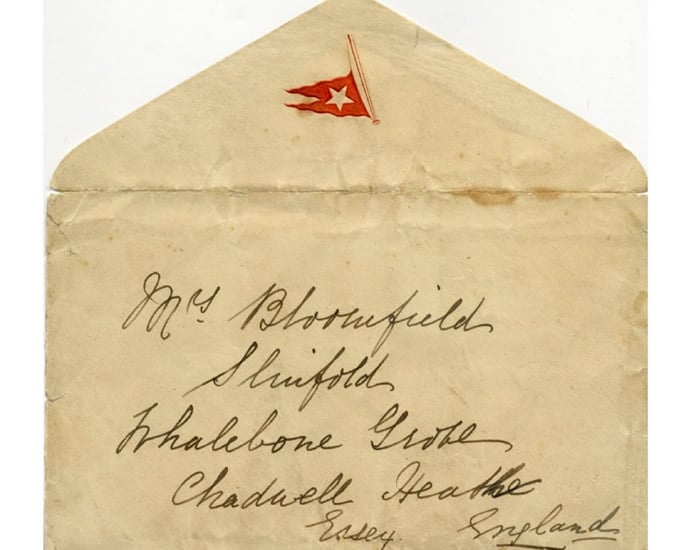 Mother left enough space for me to add my own message written in my large immature letters saying: “heaps of love and kisses to all from Eva”.

“Little did we think at the time that we would eventually bring the letter back to England. It was quite clear from the message that the journey was a terrible strain to her and she was worried all the time. There was no doubt that she needed her rest and sleep after writing it”. 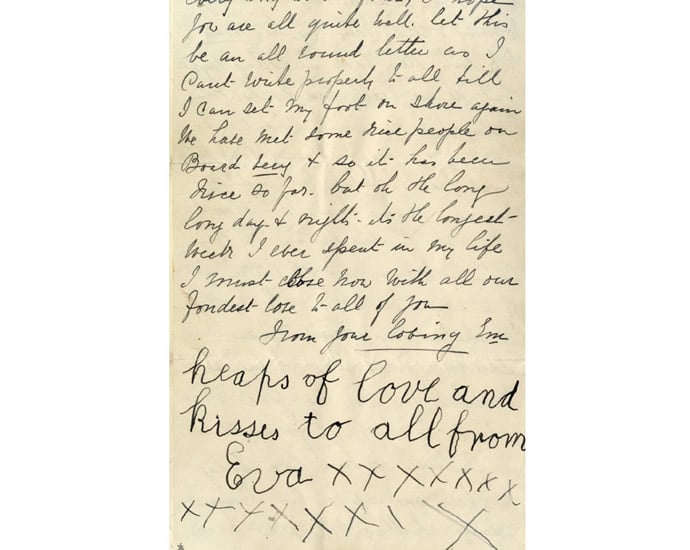 “It was late in the evening of Thursday 18th April 1912 before the heavily laden “Carpathia” berthed at the New York dockside. Thousands of onlookers had waited many hours to see the arrival of the small ship that had been responsible for the rescue. Everybody was very kind to us when we disembarked and despite the loss of all our money, passports and baggage, there were no undue delays in getting through the immigration control. My mother’s first action was to send a cable to her parents in England confirming that we had been rescued and that we had arrived safely in the U.S.A.”

The letter she had written that Sunday afternoon on the Titanic was never posted. The letter was found in the pocket of a sheepskin coat belonging to Esther’s husband. He had been wearing the coat on deck, but gave it to his wife to keep her warm when she and Eva climbed into a lifeboat. This was his last act towards his wife, as Benjamin Hart did not survive.

Tags from the story
Letters, Titanic