Being a political figure typically means millions of gazing eyes and an equally striking fashion sense. British politician Margaret Thatcher lived up to the construed expectation with panache. The Asprey handbag that she held close for over 30 years was auctioned off last year, and a few of her other belongs go under the hammer this year. The suits were the first of her belongings sold at the Christie’s auction, and the jade-green wool suit composed of jacket and silk topped dress with necktie and belt fetched almost $40,000, the highest price for her suit at the event. 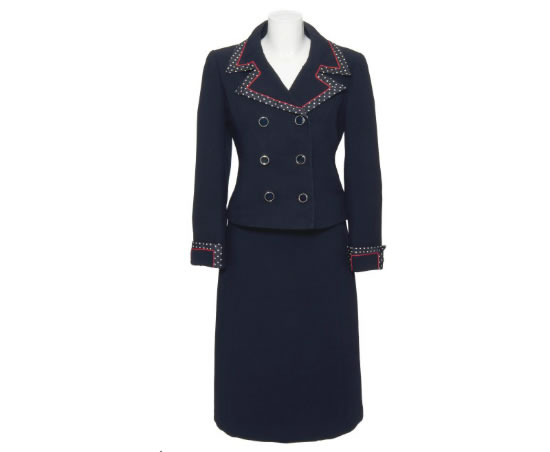 The suit that commanded the second-best price of $21,800 in the auction was the dark blue wool suit composed of jacket and skirt, piped in navy blue spotted silk and trimmed with scarlet braid. All the suits were worn by the Baroness at significant events, stirring up the political scene of the ’70s in the minds of the older folk.
[Christie’s
Via BBC]

Tags from the story
Christie's, Suit