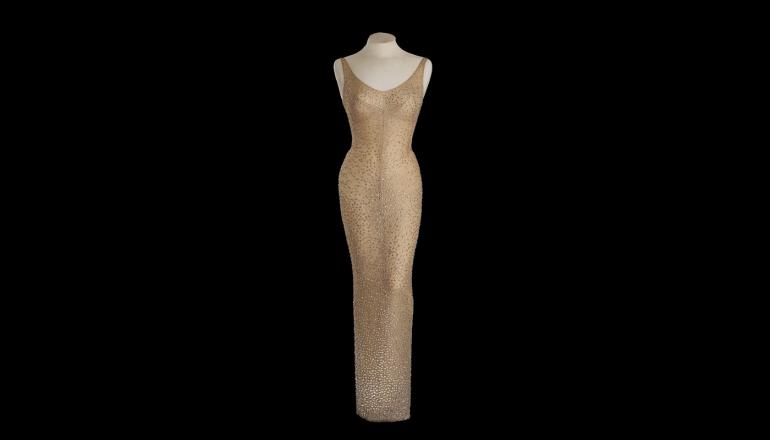 It’s this very dress that will soon be auctioned at Julien’s auctions this fall. Designed by celebrated artist, Jean Louis, Marilyn’s attire from the night is a skin-colored dress with over 2,500 sparkling crystals handstitched into it. Calling it tight would be an understatement as the flesh hugging attire had to be sewn onto Marilyn before the final reveal, while her having to go off any undergarments! Marilyn and President Kennedy’s last public appearance as well as their last meet, nonetheless left the audience gasping and stunned for more. While Marilyn’s ‘Happy birthday’ gig lasted for 30 seconds, it truly shook up one and all and is still known as one of the most famous versions of “Happy Birthday” ever.

With this inspiring event continuing to remind us of Monroe’s free spirit, Julien Auctions decided to pay tribute to Monroe by auctioning her infamous attire from the historic night. Before the final sale, the dress is set to make a world tour and will be exhibited at MANA Contemporary in New Jersey as part of the Exhibition “Marilyn: Character Not Image” followed by the Newbridge Silverware Museum of Style Icons (MOSI) in Kildare, Ireland before finally making way to the Julien’s Auctions Gallery in Los Angeles. The auction which will begin on November 17 for three days is much awaited by fans world over with organizers – Martin Nolan, Executive Director, and Darren Julien, President & CEO of Julien’s Auctions showing equal pride and delight in the unveiling. It time once again for Marilyn to sweep us off our feet!