One of the many iconic things that came out of the Star Wars franchise and probably the one thing that every man, geek, movie aficionado, collector or otherwise who lives on planet earth and has seen Return of the Jedi, will remember with great ease, is Princess Leia’s gold, metal bikini that she wore as a prisoner of Jabba the Hutt on his sail barge on Tatooine. As sex-symbols go, that has made its mark and if ever there were a museum for such objects, Carrie Fisher’s famous costume is surely going to be somewhere amongst the top five most viewed exhibits. 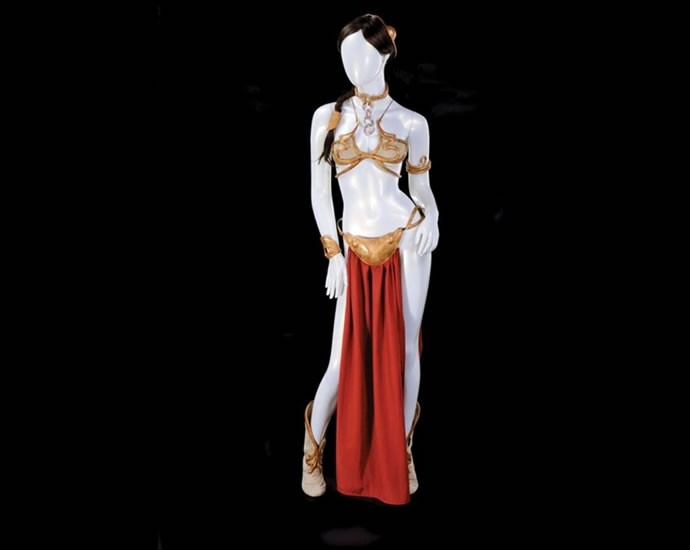 Having said that, the gold bikini was indeed put up on the block and garnered a massive $96,000 at an online auction held on October 1st. The bidding started at $80,000 which is not surprising seeing as movie memorabilia has high value to collectors the world over. In fact, it was just recently announced that the DL-44 blaster pistol used by Harrison Ford’s ‘Han Solo’ that was also featured in Return of the Jedi and The Empire Strikes Back, was going to be auctioned off with a starting bid of a whopping $200,000.

READ:  C3PO it is - What it is to fly ANA's latest Star Wars themed airplane

The auction house for the Leia ‘slave’ bikini, Profiles in History, also included a certificate of authenticity that was signed by Richard Miller, the engineer from Industrial Light and Magic, founded by George Lucas in 1975. Fisher has been quoted many times saying that small item of clothing was rather uncomfortable to wear so I do hope that the new owner, whoever that might be (the winning bidder’s name was not disclosed) keeps that in mind.

Tags from the story
bikini, Star-Wars