Experts believe they have identified a photograph of acclaimed, mentally ill and yet one of the greatest post-impressionist artist – Vincent Van Gogh. This happens to be a very rare find. The photograph shows 6 men drinking around a table, most likely to include other greats of that age (Van Gogh is the third from the left and is smoking is a pipe). This discovery is rare because the painter is said to have had a certain dislike for ‘photographs’ but didn’t mind capturing himself in self-portraits; which means no one actually knew what he looked like outside his painted self (which obviously could not have been the most accurate). 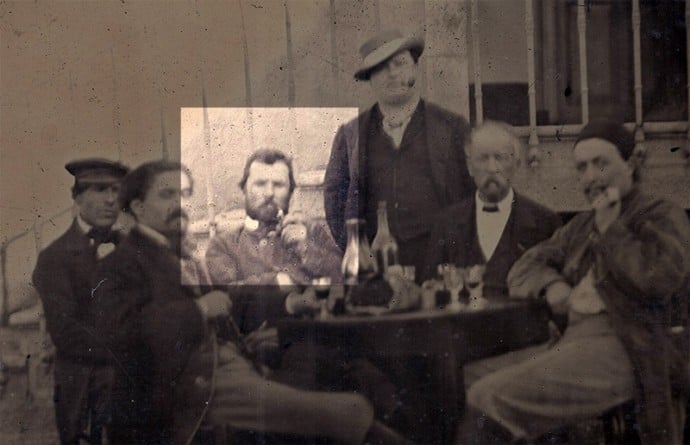 The photograph surfaced after two 19th century art enthusiasts bought the 1887 photograph at an estate sale. The two individuals recognized few of the faces in the photograph like artists Paul Gauguin and Emile Bernard, Félix Jobbé-Duval, and André Antoine and had presumptions about an unidentifiable man who resembled Dutch Gogh. The picture was then passed on to photo expert Serge Plantureux at the L’Oeil de la Photographie or ‘The Eye of Photography’, a French digital magazine that lives and breathes photography. And after a considerable amount of study and research, Serge and other experts concluded that, that was indeed the legend and his companions. However, the Van Gogh museum in Amsterdam doesn’t seem convinced. Maybe now would be a good time to call on Gogh from the beyond.
The black and white, now collectible and probably the rarest of its kind, was put up for auction in mid-June at Belgium; and is expected to fetch a whooping $136,000 to $170,000. But we won’t know anything for sure, until the final price is announced.

READ:  Not of wood or metal but made from bits and bytes - An Argentinian designer has managed to sell 'virtual furniture' for $450,000

Tags from the story
Van-Gogh