A new discovery, a Faberge egg, which was made for a top-banking dynasty was made lately. The scheduled auction at Christie’s International’s Russian winter auction in London next month is expected to fetch up to $18mn(13 million euros) Peter Carl Faberge presented the egg in 1902 to Baron Edouard de Rothschild as an engagement gift. The unique Cockerel on top of the egg decked up with diamonds pops out and flaps its wings after every one hour. It then shakes its head during the aperture and the closure of its beak. The exceptional masterpiece festooned in Pink and Gold features a mechanical figure and clock. The Russian jeweler, Faberge produced only 50 eggs for the Royal family and besides this, he is said to have created another 12 of similar standards for his private clients.

The Rothschild egg is aiming at the affluent Russian businesspeople having their base in London during the auction on 28th November at Christie’s. The egg break will break the previous record set by Faberge Imperial Winter Egg in 2002 if the sale of the egg manages to fetch $18mn. 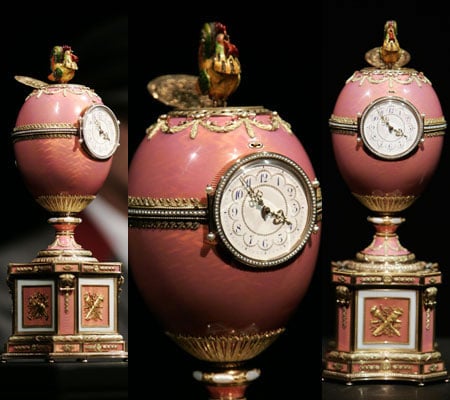