The Beatles had a long-standing relationship with their first manager – Brian Epstein. And while the two benefited massively from the mutually exclusive association, little had one known that a piece of their forged bonding would fetch thousands on sale one day. However, proving otherwise is the news of a Sotheby’s auction where the Beatles‘ first contract with Epstein was recently auctioned. 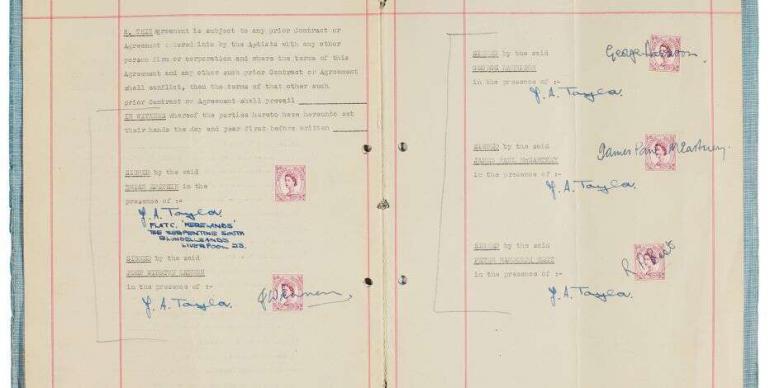 The document is the first of two contracts drawn up between Epstein and The Beatles before they found fame. It was signed by Paul McCartney, John Lennon, George Harrison and original drummer Pete Best, on January 24, 1962, and is the first of evidence to prove a working relationship between the band and Epstein. Sotheby’s books and manuscripts specialist Gabriel Heaton noted that the signed contract was special as it captured a “transformative” moment in The Beatles’ careers.

Commenting on its sale, Heaton in a statement said, “This contract was a transformative document not only for The Beatles but also for the 1960s and popular culture of the time. He further added, “We feel extremely privileged to have offered such a significant piece of history, a document that set the band on a path that brought them a level of success and cultural influence that was surely beyond their dreams when they put pen to paper to entrust their future together to Brian Epstein on that January day in 1962.” The iconic Beatles contract was sold for a total of £275,000 ($343,002)

Tags from the story
Beatles, Sotheby's