If you own bitcoin or ether and are willing to buy one of Banksy’s iconic artworks – Sotheby has just the deal for you! The auction house recently announced that it would accept cryptocurrency in an upcoming auction of the anonymous artist’s “Love is in The Air.” 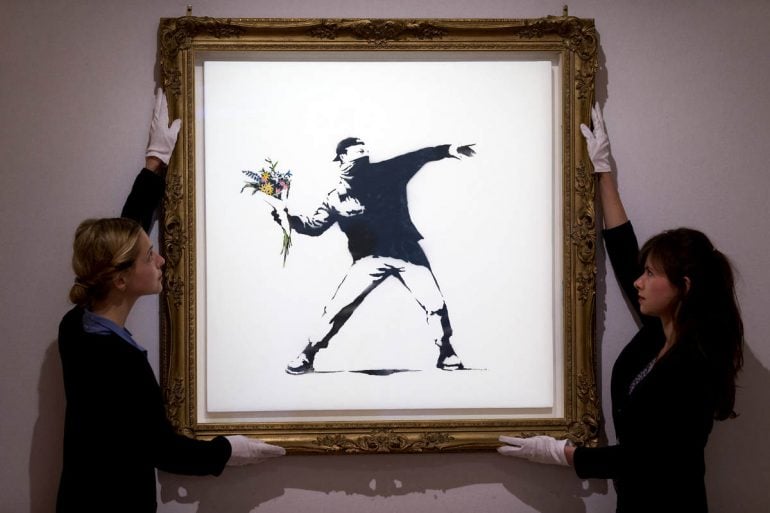 This is the first time that a major auction house will accept the two cryptocurrencies as payment for a physical piece of art. In addition to bitcoin and ether, buyers will also be able to pay in US dollars at the sale. The acceptance of cryptocurrency as a legitimate mode of payment comes as part of a collaboration between Sotheby’s and Coinbase — one of the world’s largest cryptocurrency exchange platforms.

Commenting on the sale, Sotheby’s CEO Charles Stewart said, “It may well be that the winner of this painting pays in dollars and not crypto, but I think for us, creating the possibility for this is interesting,” he further added, “There’s clearly a large audience interested in the NFT aesthetic and possibility there. Why wouldn’t that extend to the physical art world, as well? It will be very interesting to see.”

Banksy’s “Love is in The Air” is one of the best-known works from the British street artist and is expected to sell anywhere between $3 million to $5 million. With the auction, Sotheby’s wishes to honor the artist’s legacy by uniting “the biggest disruptor in finance with one of the most notable disruptors in the art world.”