The De Beers Millennium Jewel 4, a rock made more famous when thieves famously tried to steal it in the Millennium Dome heist is all set to be sold for a whopping $36 million. The oval-shaped flawless and vivid Blue Diamond weighs 10.10 carats comes from an Asian private collection, is one of twelve rare diamonds – eleven blue and one colorless – that form the world-renowned De Beers Millennium Jewels collection unveiled in 2000, in celebration of the millennium.

Shining so big and bright, it’s no wonder that the stone caught the eye of a local London gang who thought they could pull off the biggest diamond heist in history. Thankfully their heist was foiled by London police who replaced the diamonds with fakes. The notorious gang was caught trying to smash through a perimeter wall using a JCB and jailed for up to 18 years each. 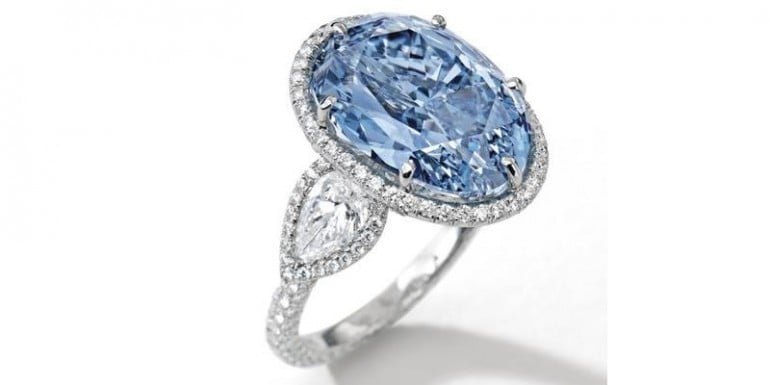 The De Beers Millennium Jewel 4 from the Cullinan Mine in South Africa and is extremely rare and is one of only a dozen blue diamonds -over 10 carats – in the world. Its current owner an Asian collector has decided to sell it at Sotheby’s Hong Kong spring sales on April 5. Currently the 12.03-carat Blue Moon of Josephine blue diamond – which sold to billionaire Hong Kong businessman Joseph Lau for $48.4 million at Sotheby’s Geneva in November, is the most expensive gemstone ever sold at auction.