If you’re a collector in love with the antiques, this rare Faberge miniature chair is something that you’d totally adore. Sadly though, it stands taken, after being auctioned at the Bankside saleroom sale in Cirencester. It was originally bought by a British collector for just $92 (£75) and has gone on to fetch thousand over its pre-sale estimate for over $ 5,91,000.

Made from gold, jadeite, crystal and pearl, the tiny sedan chair was specially created for the Russian royal family and is said to have been sold off after the 1917 Communist revolution. It is modeled by Mikhail Perchin, Carl Faberge’s renowned craftsman and was made between 1899 and 1903. A collector’s delight, the chair measures 6in by 3.5in and boasts excellent provenance, having been imported into the UK in 1928 by George Stockwell’s Stockwell & Co, after being in the same family since it was purchased in 1929. 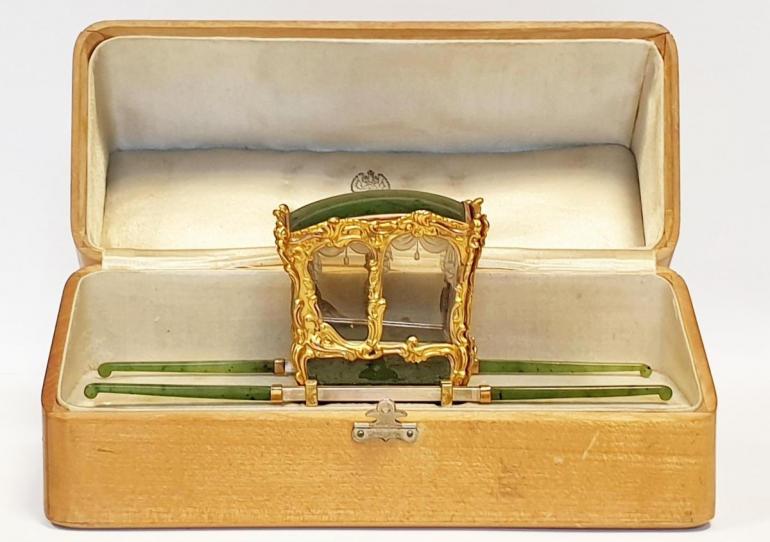 Commenting on its sale, Auctioneers Elizabeth Poole and Lindsey Braune said, “Discovering the sedan chair in Kenneth Snowman’s book was rather a spine-tingling moment. It belongs to a family who collected some absolute gems in the early twentieth century – and have looked after them ever since.” Sedan chairs are amongst the rarest products produced by Faberge, with fewer than ten (including this one) known. No wonder this green and gold miniature has sold off at a sky-rocketing price of $ 5,91,000!

Tags from the story
Chairs