If you’re into rap and collectibles alike, you may fancy this piece of information! Presenting to you the Notorious B.I.G.’s iconic crown that is all set to go on sale at a hip-hop themed auction! Worn by him in 1997 photoshoot, days before his death, the plastic prop will be sold Sotheby’s New York in the coming month. 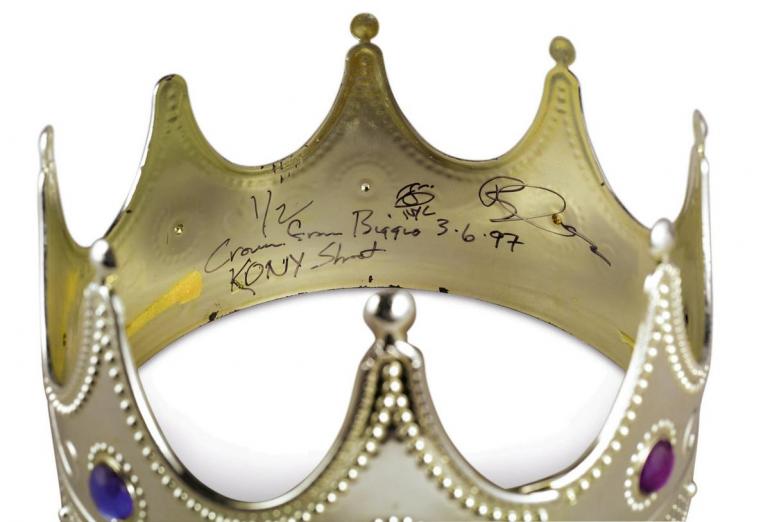 The late rapper had last donned it the King of New York photoshoot with Barron Claiborne, snippets from which show Biggie posing against a red background with the crown adorning his head at an angle. It is currently owned by Claiborne and features signatures of him and Biggie, along with the inscription, “Crown from Biggie KONY Shot NYC 3-6-97.”

In addition to the crown, the auction will also include three prints of the iconic photograph, the 10th anniversary “King of New York” photograph, and the contact sheet from the shoot. In all the lot is expected to fetch anywhere between $200,000 and $300,000.

Commenting on it, Claiborne in a statement said, “After 23 years in my possession, I’m very excited to share this iconic piece of Hip Hop history with the public,” he further added, “With the tragic events that unfolded just days after the photoshoot, this image of a crowned Notorious B.I.G. became much more than a portrait – the image transformed Biggie Smalls into an aristocratic or a saint-like figure, forever immortalized as not only the King of New York but a king of Hip Hop music and one of the greatest artists of all time.”

Tags from the story
New-York, Sotheby's