It was just 50-minutes into the New Year, at exactly 12:50 AM that Britney collapsed and was dramatically carried out of the Pure nightclub in Las Vegas, hidden under a hooded black poncho behind a screen of 12 burly bodyguard bouncers. Thereafter Britney Spears has decided to take the first few steps towards success with her New Year’s resolution. The 25-year-old pop star vowed to try and take better care of herself in 2007 and has started with some well-deserved rest and relaxation in a high-end spa. Brit, who has been nothing less than one of Hollywood’s hardest party animals the past few months, has officially taken some time for herself has checked herself into Scottsdale’s Sanctuary Spa at Camelback Mountain. It is a luxury boutique hideaway with dramatic mountain and spa casitas offering spectacular views of Paradise Valley. Sanctuary Spa, an intimate retreat, offers Asian-inspired treatments along with a relaxing meditation garden, movement studio, and fitness center. 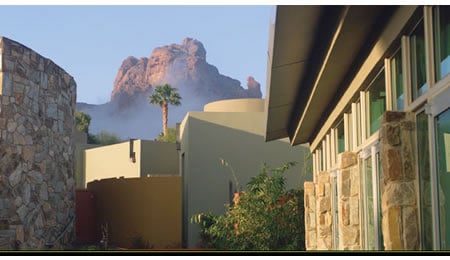 Enhanced by modern architecture and the breathtaking setting, the Spa’s relaxing meditation garden, reflecting pond and Watsu pool provide a tranquil experience. Spa services and classes in the state-of-the-art fitness center and movement studio include Pilates, meditation, Yoga, fitness & nutrition consultations, and more. As for Brit, falling asleep on New Year’s Eve is a clear indication that she is in dire need of some downtime!
Source