David Beckham certainly seems to know how to live life king size. He drives the best cars in the world and lives in one of the most exclusive properties owned by celebrities. That does not seem to be stopping Beckham from splurging more! His new obsession seems to be cars, and that too black ones. While we do not understand what attracts him to black cars, it could perhaps be an unconscious desire to try the darker side of life, which he seems to be lacking. David bought a customized Range Rover Sport, which has been modified by Platinum Motorsport.

READ:  Adidas has created an exclusive velvet football worth $15,600 for the world cup 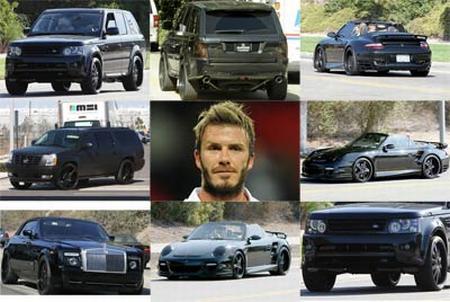 Cadillac Escalade, Jeep Wrangler, Lincoln Navigator, Porsche 911 Cabriolet and Rolls-Royce Phantom Drophead Coupe are some of the other black cars that he has recently purchased. In all, David Beckham has spent more than $8.3 million on cars! We had written about the relationship between football stars and their cars, especially David Beckham sometime back. You could also read about how David sold his Bentley.
[Auto Trader]