Mr. Donald Trump has always been a businessman, never a boatman. Perhaps his tryst with superyacht Kingdom 5KR for a span of 3 years converted him into a yachting enthusiast. Donald Trump bought the 282-footer Trump Princess from the Sultan of Brunei for a measly $30 million and intended to use it as a business tool as a tourist attraction and to host his VIP buddies and clients. The luxury vessel that flaunted a helicopter landing pad, a cinema, an 800-film library, a discotheque, and a hospital with an operating room was sold in 1991 to Prince Alwaleed bin Talal. 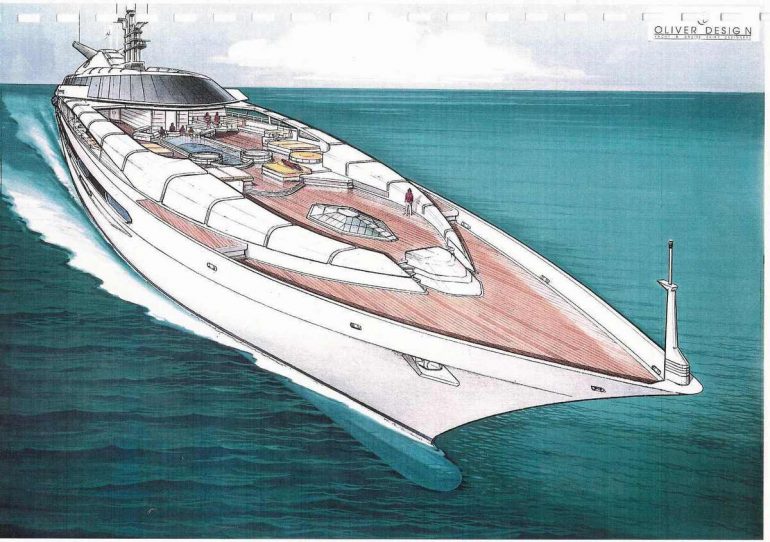 The ship made a lasting impression on her owners as the Saudi Prince commissioned a second New Kingdom 5KR yacht. In contrast, Donald Trump, who, by his own admission, gets on a boat only to get off in minutes, commissioned Spanish firm owner Jaime Oliver and his son to build the largest and most beautiful yacht in the world in 1993, only two years later. Learn more about his Trump Princess II project that unfortunately never sailed: 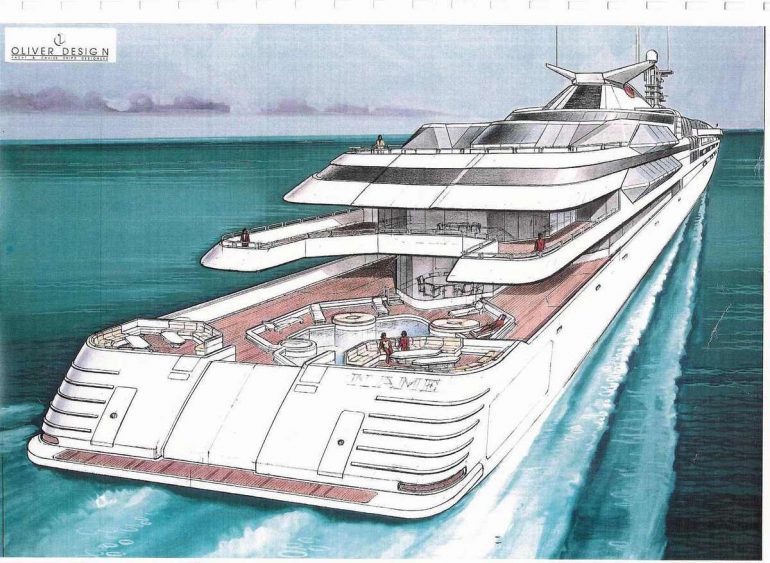 The Trump Princess II was touted to be yachting world royalty, but life intervened:
Donald Trump was better known as a real estate magnate in 1993 with casinos and hotels in many parts of the world. The ever-ambitious Trump commissioned the Spanish studio to design, in his words, “not only the largest yacht in the world but at the same time, the most beautiful.” Oliver Yacht Design delivered a ship of dreams on paper for $170,000; that’s nearly $350,000 today. 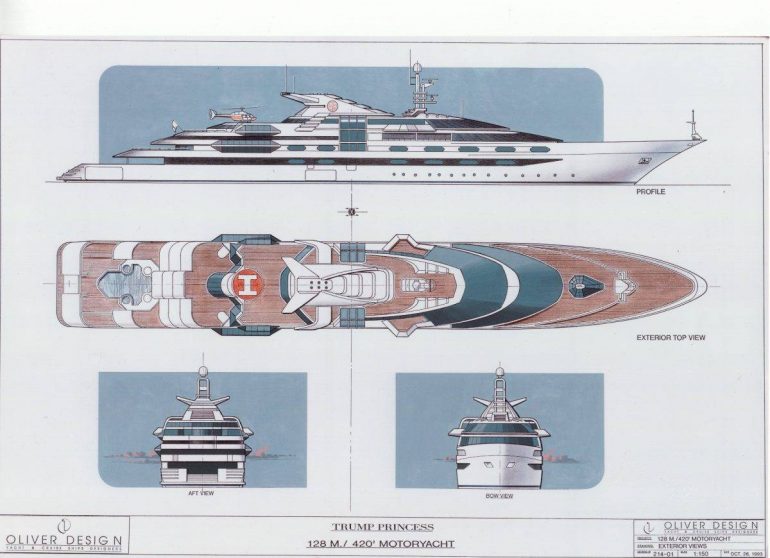 The spectacular rendering revealed Trump Princess II to boast four decks, a heliport, luxury split-level suites, sophisticated lounges, a swimming pool, and hot tubs, per Oliver Design. The 420-foot luxury vessel looked perfect for a real estate mogul, complete with a larger-than-life owner’s suite spread across two decks. It included a cocktail bar and a superyacht spa pool that the businessman could easily access from the main cabin. 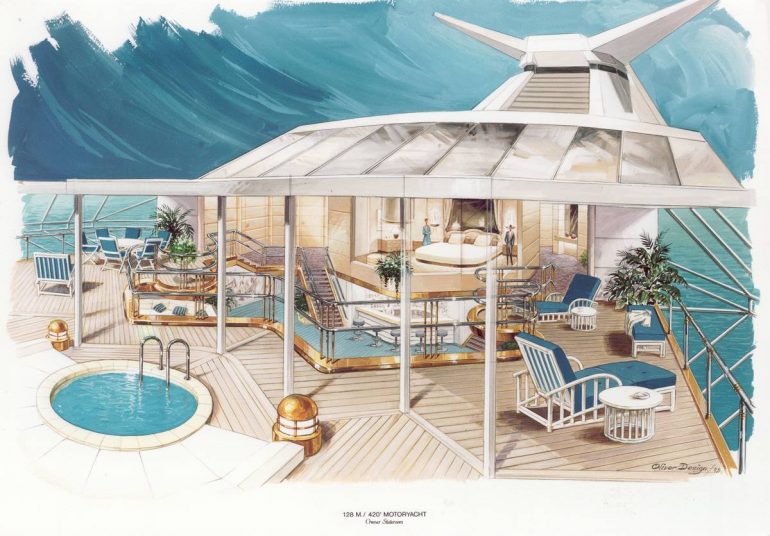 Trump Princess II offered umpteen lounge spaces and an upper-deck superyacht helipad. Glass windows allow the perfect view of the vast gallery decorated with palm trees. The ship also showed the presence of glass partitions between the main-deck saloons and dining areas to make the deck look open and roomy. 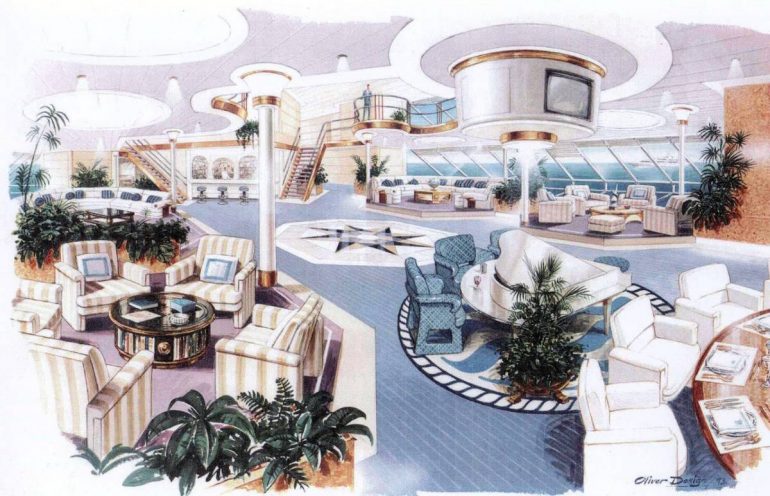 It is believed the billionaire worked closely with Jaime Oliver’s son IÒigo on the design of the Trump Princess. A little later, Oliver Design began talking with Spanish shipyard Astilleros EspaÒoles(now Navantia) about construction, but the project reneged.


A spokesperson explained, ‘Without offering much explanation, Donald Trump notified Oliver Design that the yacht would not finally be built; a decision that was probably not unrelated to the businessman’s delicate financial situation at the time, with his hotel and casino businesses facing bankruptcy.’ 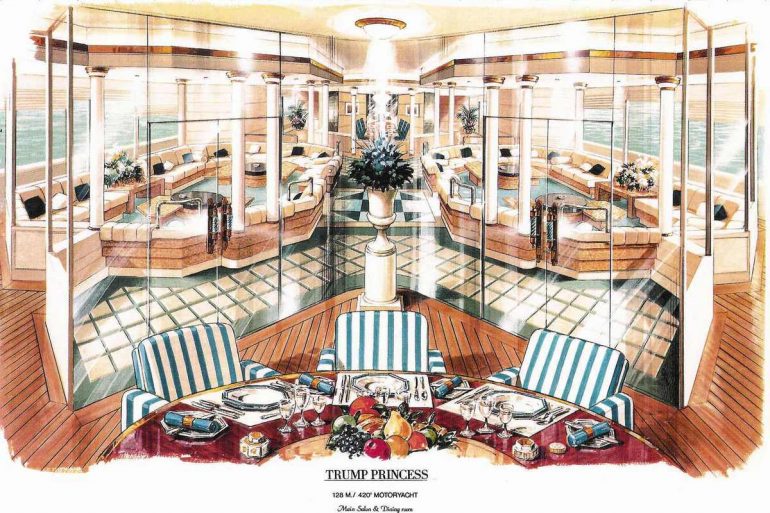 Trump took a practical decision of scrapping the pleasure craft project as his companies had a combined corporate debt of $3.5 billion and personal debts of around $900 million.


Trump may not be sailing in a superyacht, but he flies in style in his iconic Boeing 757
Donald Trump’s beloved $100 million Boeing 757 private jet is an object of envy. The beautiful private jet comes packed with modern luxuries such as plush cabins, a 57-inch television, and custom mahogany coffee tables. The private aircraft is outfitted with Rolls Royce engines, a shiny paint job, and the American flag on its tail. In true Trump style, the bathroom fixtures, light switches, and seatbelt buckles were plated in 24-carat gold
Tags from the story
Billionaires, Donald-Trump, Superyacht