Etihad Airways dazzled the world with their unveiling of the A380 – The Residence, which is an ultra-luxurious, spacious 3-room private suite that has a living room, bedroom and en-suite bathroom. And now, they did it again with the latest advertisement campaign that featured the famous Golden Compass actress Nicole Kidman, who was also revealed to be the brand ambassador to the Middle Eastern airlines. The ad focuses on the airline’s vision to up its game in air travel and subsequent technology. ‘Flying Re-Imagined’ is the new tagline and the ad has Kidman, modelling in the rooms of the cabin suite and well as giving the voiceover. The ad, though it doesn’t harp on the features of the suite, builds up the anticipation and excitement for the same. The minute long film was shot at the Louvre, which is also a major feature aboard the A380 in the form of the replicated lattice designs, the Yas Hotel and Al Bahar Towers – both in Abu Dhabi and Prague. The ad also played on aspects of Arabian influence especially in the choice of background music. 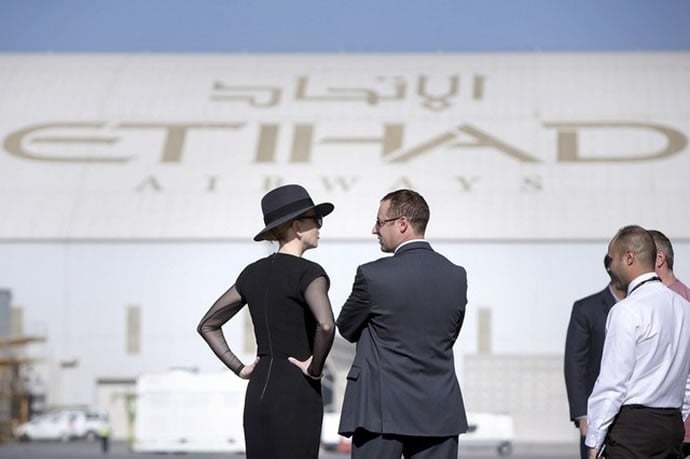 The ad was shot by big shot directors Anthony Atanasio and Valerie Martinez, who have previously worked on creating crowd impacting advertisements for Levis, Nike and Audi. And it’s a no wonder the airlines chose Oscar-winner Nicole Kidman to head the campaign, other than being easy to work with and having an elegant taste in style, the actress also has a busy travel schedule for the rest of this year with multiple film promotions all over the world.