Jennifer Lawrence had us oohing and aahing when she became the Dior spokeswoman. Between you and me, we were gushing over the Miss Dior from our Dior-tastic S/S ’14 style guide practically for its Miss Lawrence affiliation. But this time, the actress has us guffawing after falling within minutes of making a dazzling entrance on the Oscar red carpet in a red (no surprise there) Dior number. Not surprised? Well, neither are we. 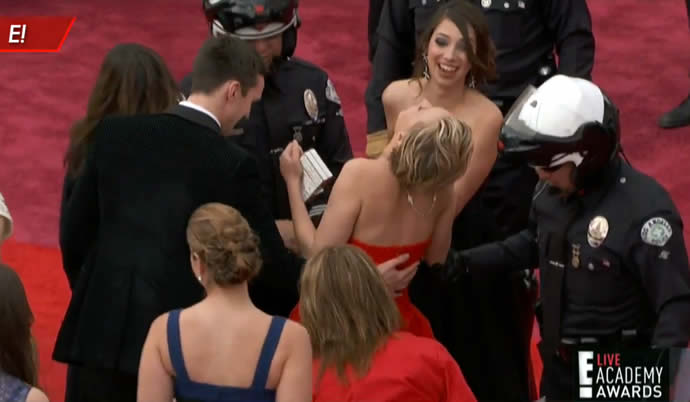 Jennifer will always be Jennifer!
In all her Oscar winning glory, Jennifer took a dramatic fall last year as she made her way up the stairs to accept her award. At least that establishes one thing- the stellar performer knows how to be consistent.

Match much?
Some of us may well argue that falling could’ve just, JUST, been her lucky charm. But given that she didn’t win this year, some others can get more laughs by believing it was a simply an unsuccessful attempt at camouflage.

Dior.
First it was the voluminous strapless, this time it’s a red peplum. And both gowns have one thing in common- fall or no fall, Jennifer Lawrence can rock Dior! And a sense of humor!


The fact that she declined any help when she tumbled while climbing up last year and continued to accept the award or that she exploded in a volley of giggles this time as she got up just go on to show why the latest Dior campaign is her third for the maison. Plus her acting chops more than make up for any of her other falls, err…flaws.