Her covetable style has made her the subject of numerous wardrobe-dissections, her high-profile wedding was the most talked about event of 2011 and she’s even been immortalized as a doll, but only now has Duchess Catherine -better known as Kate Middleton- received the ultimate honor, she’s been animated into a Simpson’s character!

Illustrator AleXsandro Palombo has reimagined the young royal as a cast member on the iconic sitcom, complete with four fingered hands and sunny yellow skin! Taking this tribute one step further, Palombo had given us renditions of Kate in all of her famously fashionable outfits from her classic coat dresses to those ubiquitous L. K. Bennett nude pumps and from the Issa engagement dress that spawned knockoffs across the globe to that oh-so-enviable collection of Philip Treacy hats. Palombo’s artwork features Kate (sometimes accompanied by the Queen herself) posing at various spots inside and outside Buckingham palace. 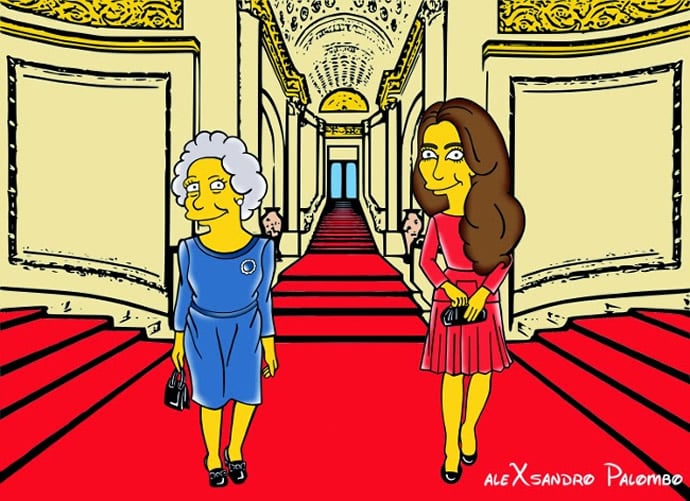 Can we just say that this artwork has us DYING to see Kate as a guest on the actual show? The 25 season old animated series is the longest running sitcom on American television and has hosted everyone who is anyone is Hollywood and popular culture. With a notable guest list that includes British icons like Mick Jagger and even the reclusive J.K. Rowling, we think Duchess Catherine would fit right in!

Tags from the story
Kate-Middleton