Being labeled as the world’s best soccer player has its own benefits, doesn’t it? Stars and celebs so take people that they tend to kind of idolize them. Like who would have known that Lionel Messi would be paid an ode with Ginza Tanaka, immortalizing the player’s left foot! This is another story of craziness that surrounds the player – Mauricio Benitez, the Colombian artist, better known as Mr. Bling, presented Messi a gift – a portrait of the soccer star, made entirely of colored Swarovski crystals. How bling could that be!

Messi was recently in Medellin, Colombia, attending a charity soccer game called “Lionel Messi and Friends vs. The Rest of the World.” The ticket-based game was held to benefit children suffering from a terminal illness, and of course, won by 9-6. The game was quite a success, with about 15,000 customers. It was during a training week in Colombia that Mr. Bling saw it appropriate to hand Messi the portrait, which is estimated at $50 million (£33 million). 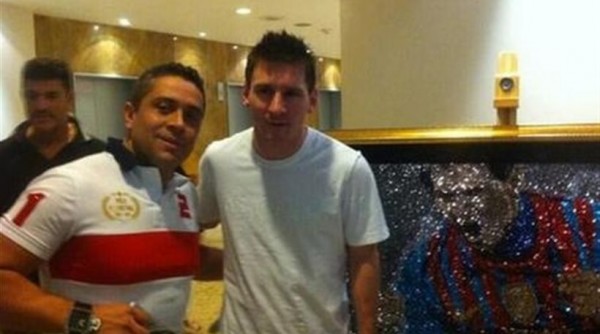 Tags from the story
Self-Portrait, Swarovski