Long before she was the queen, Queen Elizabeth II was a cover girl. She graced the cover of Time Magazine when she was 3 years old. That sounds adorable but the recent reveal of a doctored image of Queen Elizabeth on a campaign bus has left the palace unamused. An image of Queen Elizabeth II wearing a “Make American Great Again” hat on an unofficial campaign bus known as the “Trump Train” has caught the attention of Buckingham Palace. The tour bus is owned by a Trump supporter named Buddy Hall and serves as ‘the unofficial campaign tour bus to support the 2020 reelection of President Trump. Buckingham Palace is joined by the likes of popular website hosting service GoDaddy who has also asked that their logo be removed from the bus. I guess no one wants to be associated with Trump especially after witnessing the debacle of Canada’s ‘fashion fairy godmother’ Suzanne Rogers who instantly became a persona non grata for simply posting a photo with the man. 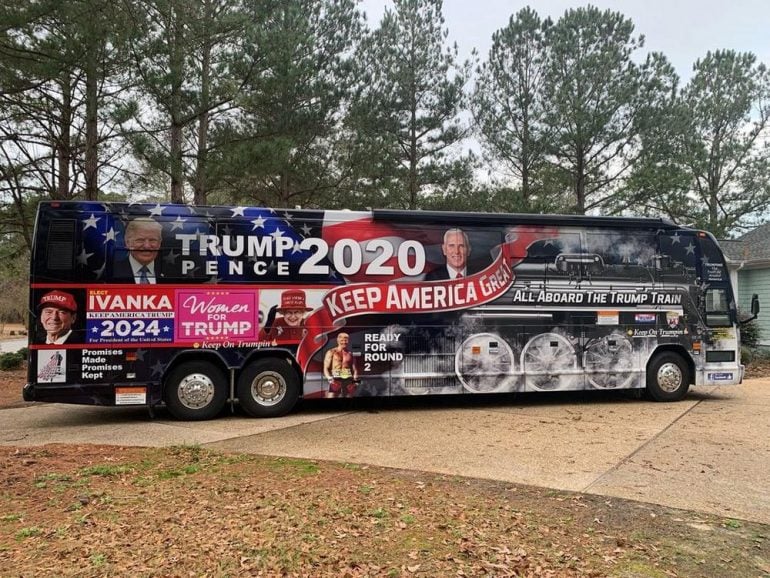 GoDaddy spokesman Dan Race commented, “GoDaddy doesn’t sponsor the bus and we don’t have any advertising relationships with the bus/owner whatsoever.” Hall also explained his side of the story mentioning that he did not mean to suggest GoDaddy was a sponsor. It was just his way of showing appreciation for the lovely website they built him.