I don’t know whether it has anything to do with my claustrophobia, but I just don’t enjoy looking at fish tanks. My family however didn’t care about my views on a fish tank and still went ahead and installed one in my home. But today I learnt that the fixture which is an eye sore for me is however considered to be a status symbol of sorts by many well heeled folks. New York Times reports on the growing trend of folks who are splurging on mega-aquariums that function as the centerpiece of the home. In fact, most people have custom aquariums that are the centerpiece of their living spaces. The Wilzing family from the posh neighborhood of TriBeCa for instance has a 14 1/2- foot, 450-gallon aquarium, which is controlled by a remote touchpad, and can be filled with a variety of lights. Believe it or not, this lighting gear runs on the same software that powers Broadway performances and rock concerts!

Believe it or not, the aquarium has now become a must have piece of décor for many folks.
Interior designers have stated two reasons for the rising popularity of aquariums among the rich, firstly they blame it on the human tendency wherein a person is inspired or wishes to install a large aquarium after seeing one in the posh nightclubs and hotels. The second reason is the need to flaunt ones luxurious lifestyle which the folks hope these high-tech aquariums will succeed in doing. In fact, this segment of people has no qualms about spending $600 for a black tang or $5,000 for a pet shark, or to have service people on call 24/7 in case a fish gets sick or dies. Aquariums like the Wilzigs’ cost a minimum of $50,000, plus a minimum $1,000 a month for maintenance. And that’s before buying a single fish.
Joseph Caparatta, owner of Manhattan Aquariums has himself catered to one such client. His company installed a 700-gallon aquarium in a town house apartment in the West Village. The tank which was suspended from the ceiling weighs 6000 pounds when filled with water and reportedly cost the owners $200,000 in equipment and service. What is more, the equipment needed to support the huge aquarium (pumps, pipes, chillers) occupies a walk-in closet as well as part of a roof deck.
If you want to go all out, you can go ahead and opt for the ceiling-mounted Spaceariums! These Spaceariums which vary in sizes from five to eight feet conceal the pumping and filtration machinery and offer a 360 degree view of its insides, like a floating LCD screen.
And folks like Justin Muir, owner of City Aquarium, a Brooklyn-based rival to Manhattan Aquariums, makes sure the luxury loving community gets a fish tank that will definitely live up to its status symbol image. He uses handmade sculptures and antique statues, as well as exotic fish, sea horses and coral to decorate these tanks and even offers bling loving clients a gen tank! The most expensive tank Mr. Muir ever built, though, was a $750,000 one which comprised a planetarium ceiling and crescent-shaped aquarium panels hoisted by forklift.
With the number of features and high-tech options that are available for custom aquariums these days, it is no wonder that many well heeled folks are turning to these fixtures to flaunt their luxurious lifestyles. 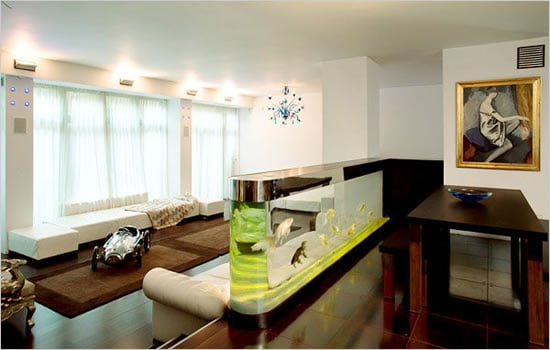 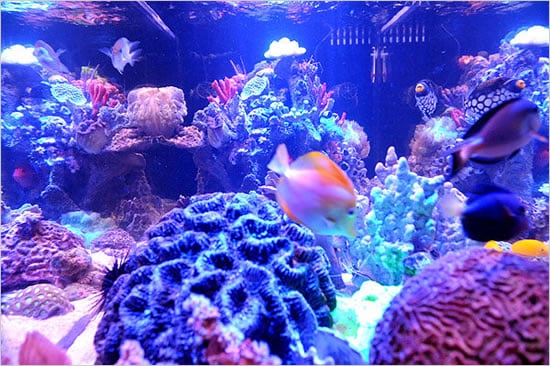