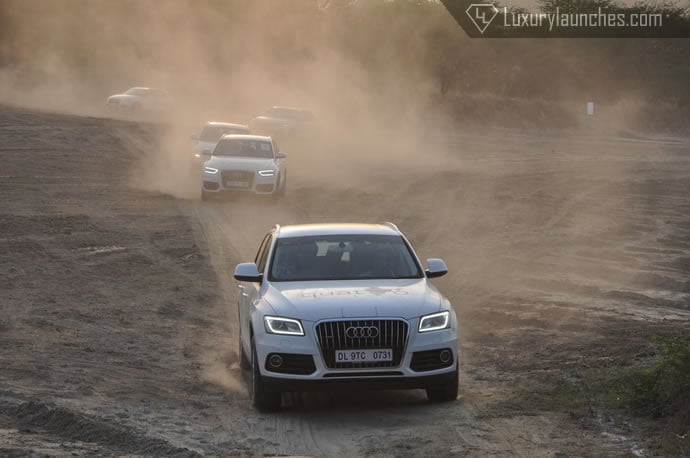 Audi time-to-time organizes Q-Drive events across the country to give its owners and prospective clients a chance to experience the automaker’s Q-Series SUVs on hard-core off-road tracks to test the vehicles’ Quattro prowess. We were invited to one such Audi Q Drive experience hosted by Audi Noida and Delhi-West. Audi Noida which is also the largest Audi Terminal in India was chosen as the flag-off venue and the first half of the day was reserved exclusively for us auto journalists. It had rained quite heavily the night before which slightly disturbed the schedule for the day; but Audi Noida played an excellent host and some snacks and few mocktails later we were ready to head towards the off road track which was about 20 some kilometers from the venue set amidst farms on the outskirts of Noida. After the mandatory safety briefing by trained supervisors, a fleet of five cars comprising of Audi’s all the three models from the Q Series – Q3, Q5 and Q7 – made its way towards the tack.

The off-road track in Greater Noida
As mentioned before, the track was located on the outskirts of Noida so a handful of journalists got a chance to stretch the legs of the Audi Q-Series cars on our way to the location. The fleet was being led by the chief instructor for the day, Mr. Rohitash, and we traversed the Greater Noida Express and later branched off to a slip road which led us to narrow forested trail. The approach road through the forest was quite scenic and it was fun moving through the tight confines of the trail. After travelling about a kilometer off the Expressway, we finally reached the track and after a quick stop-over for some refreshments and a photo-session by organizer’s official lensman we were ready for some fun-filled off-road action.

Our time on the track
I got a chance to go around the track twice – once sitting on the rear seat with a fellow auto journalist piloting a Q3 around the track and later having a go myself with the flagship Audi Q7 at my disposal – experiencing both being driven and driving around it. I am not a very good passenger and feel jittery when someone else is on the helm, so I’ll rather share the experience of the lap I did around the track. The queue to the Audi Q7 was long for not so surprising reasons but luckily I got a chance to drive it on the second round itself. The suspension settings were already set by the previous driver but I fettled around to check if everything was in place. The track designed by the organizers was a slow and technical one replete with ruts, incline, articulation and tilts categorized into different sections marked by signboards. The track started with a steep decline which had a very narrow entry and a signboard that read, ‘Activity – Descend, Ability – DSR.’ Sitting in the Q3 earlier, I saw the driver finding it tricky to maneuver the car through narrow entry which made me nervous driving the massive Q7. I was surprised how easily the Q7 managed to slip through it without breaking a sweat and made the decline look incredibly easy. What I disliked to a certain extent was the steering as it felt a bit vague at times. I guided the Q7 slowly through all the sections in order to check how the various electronic aids were dealing with the obstacles. In additions to the first section, the ones I liked the most were the Articulation section and the incline. The articulation section was meant to test the Quattro four-wheel-drive system. With one of the four wheels in air at every time, one could feel the system working and sending torque to the wheels with maximum traction. Another section which was particularly interesting involved driving the SUV on tilt angle of 38 degrees. The obstacle was meant to test to low center of gravity of the car and it was quite a bit of fun to manage the Q7 on the loose surface. Next up was the hill climb activity which was designed the gauge the torque of the SUVs on the incline and ‘Brake Assist’ feature on the decline. Some of the people doing the lap managed to lock the wheels on their way down because of the loose soil but the Q7 managed just fine. There was no dearth of low end torque and the auto-transmission worked like a charm without any hiccups. The rest of the sections involved other obstacles but they weren’t too challenging or interesting. What I felt missing in the track were a slush pit and a section with bigger sized rocks; these are two obstacles regularly encountered on challenging trips to the Himalayas. Nevertheless, the off-track had enough technical sections to test the various driver aids in the Audi SUVs and I had a fun time with the leviathan Q7 which surprisingly was nimble and felt easily maneuverable from the inside despite its massive size. Check out the short video clip of our time on the track.

But once on the expressway, the minor niggles were overshadowed by surprise once I put it on sports mode. Above 2000rpm, the turbo lag disappeared and the compact SUV was spunky


On the way back from the track
You lose track of time when you’re having fun, and that’s exactly what happened. I was famished and it was time to head back to the Audi Terminal where the organizers had arranged for lunch. On our way back, I drove the Q3 crossover and driving it immediately after its bigger sibling was bit of a letdown. Lacking most of the electronic aids, harder suspensions and cramped for space as compared to the Q7, the Audi Q3 felt more like a hatchback. But once on the expressway, the minor niggles were overshadowed by surprise once I put it on sports mode. Above 2000rpm, the turbo lag disappeared and the compact SUV was spunky. Nice little crossover it is I must say! All-in-all, it was a weekend well-spent and I believe Audi should organize these events more often to allow luxury SUV owners to take their vehicles off the road and enjoy their beasts in their natural habitat.