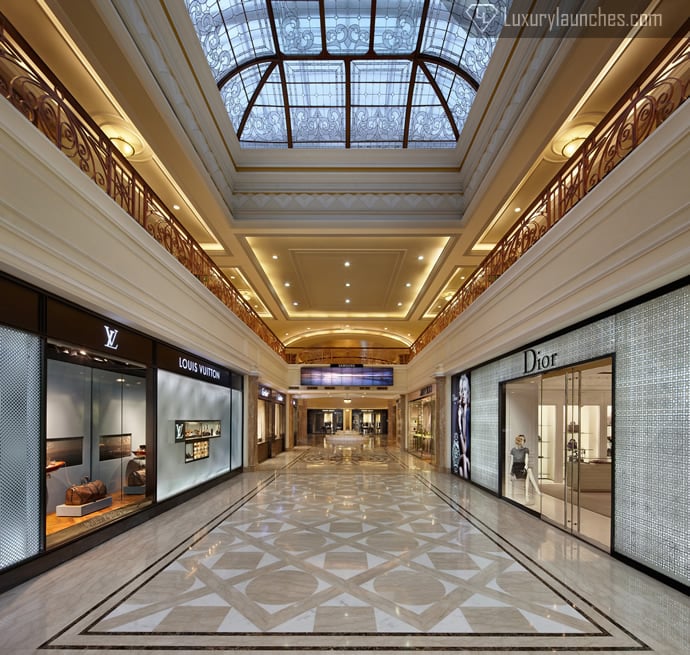 That my nail paint is chipping is a fact I wouldn’t normally consider sharing unless it was with my inner friendly echelons, which are anyway privy to such statements as passing comments. Today, however, is different. Because today I’d like to state that, even if as a prelude to the reminder it gives- Emporio’s Fashion and Food Fiesta that took place on July 23rd.

Mud cakes and salmon rolls could be seen rolling off the makeshift Set’z counter, on the one hand. One another, well-heeled patrons were queuing outside the likes of Judith Leiber and Ranna Gill. And not just for the usual offers, of which, there were many! But for the host of activities that included everything from Tarot card reading, numerology, palmistry, coffee cup reading, aura reading, reflexology, pressure point massages, skin consultations. 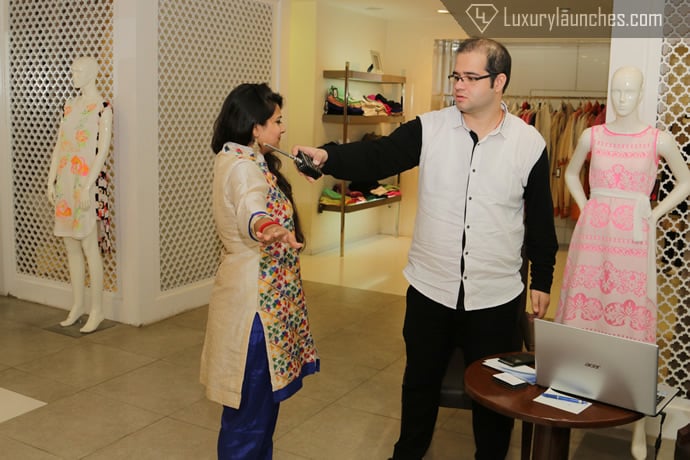 “We at DLF Emporio Celebrated the Fashion and Food fiesta with great enthusiasm. We aim to offer our patrons with unforgettable experiences while shopping by offering them pampering sessions,” Dinaz Madhukar, Senior Vice President, DLF Emporio said. And while what you see above is a shopper stopping for “aura reading”, we too took our cues, which brings me first to my nail art tale. The newly opened Worship salon had extended its services to sister stores and was offering nail art among other things. 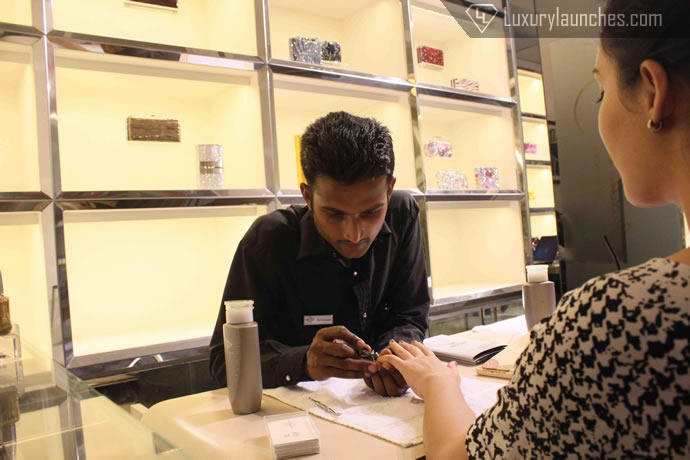 As you would’ve guessed I walked straight to the faux nail bar for a very real and dazzling nail art experience. Propped against a backdrop of Judith Leiber clutches, it only made me think how utterly the setting was appropriate. In retrospect, I did walk out of there with some thing glittery, even if not a new purse. And that never fails to feel good. Next up was Rajesh Pratap Singh. His boutique, that is. One foot in and you get the sense of being in a cage made out of scissors, stretched open and joined together at different lengths.

The fact that they’re painted white and nearly inconspicuous makes this fascinating more, life-threatening, less. What sat in plain sight, however, was a placard that read- Mini Foot Reflexology & Hand Care by L’Occitane. My companion opted for the former as I perused through Pratap Singh’s indie-chic collection. But that was only until I was whisked away by our warm hosts to the spot they had found me at the Pashma outlet. A cashmere haven, this, today it was teeming with Palmistry enthusiasts besides the usual guests. 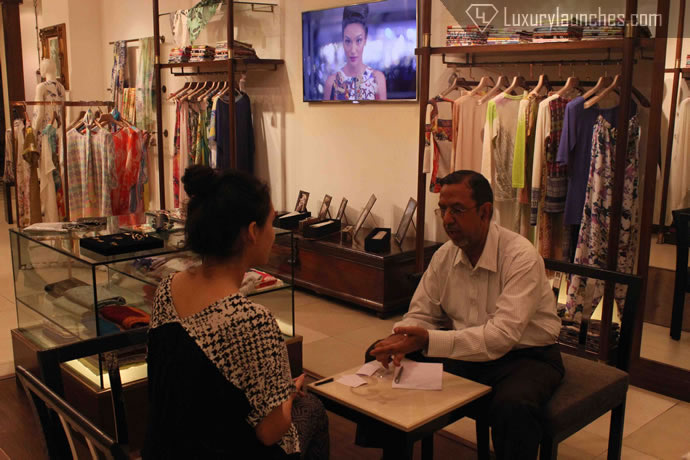 Thanks to a humble, prophesying gentleman, I unearthed life facts that I’m neither willing to believe, refute, nor reveal. It was fun, nevertheless. The queues would confirm if they could and about the Coffee Cup Reading at the Namrata Joshipura store as well. Now that’s one thing I didn’t actually try but I imagine I’d have liked it, even if for that in-between boutique-hopping caffeine kick. What I did try soon after was the Skin Consultation by Reva at the Ogaan outlet. 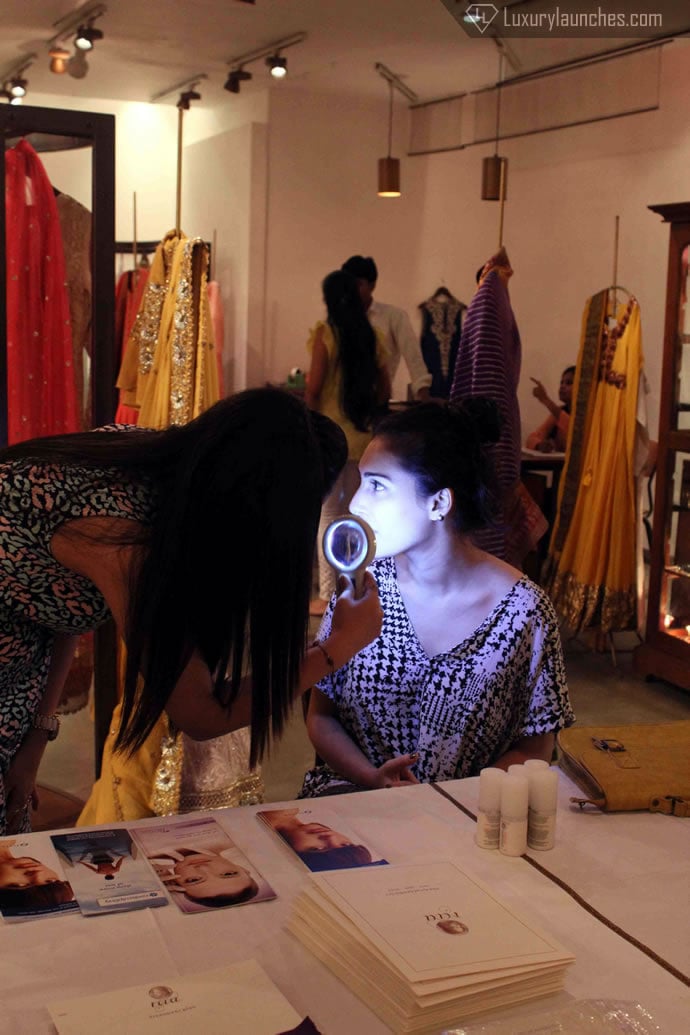 Ladies, let me tell you. If you missed this, you also missed a wealth of diet trivia and skincare knowledge. Reva’s skin as well as face and body enhancement methods in this crisis of good superficial and even inner health aren’t exactly worth overlooking. It’s a good thing then that their clinic is located right here is South Extension. After our little brush with them, we’re returning for the much discussed and thus, anticipated Fusion Facial. 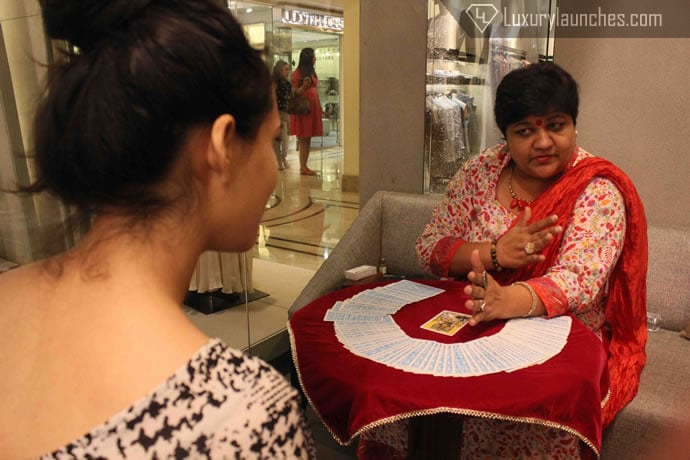 But getting back to DLF Emporio, unlike most days, this one definitely saw throngs of stylish people on the uppermost level from afternoon to evening. And as the festivities neared their end on the Third floor location, all of which had seen it’s stores turn participants, we swooped into one last one for a Tarot Reading. Flitting between one shimmery Rohit n Rahul jacket and the next, we anxiously awaited our turns. And are glad we did.