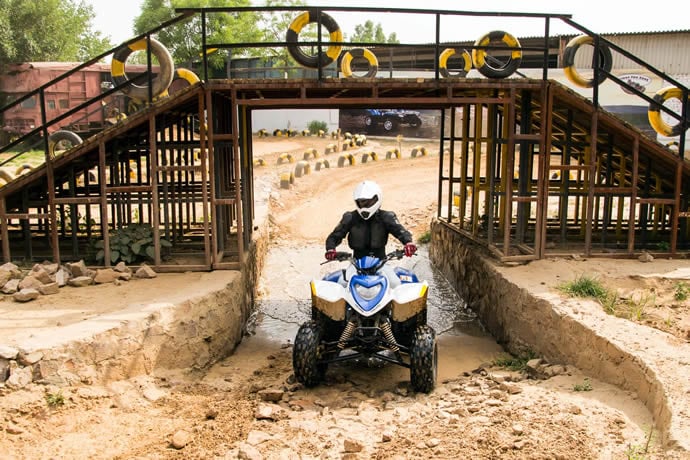 Before I begin, let me confess that I am a huge fan of Polaris ATVs and I still remember when the brand was launched in India back in 2011, I was one of the first few who visited its dealership in Delhi. So when I received the invitation to try out their off-road quadbikes on a proper dirt track, I was thrilled. In India, the concept of ATVs and dedicated off-road vehicles is still comparatively new but Polaris India has been going strong ever since it started in operations in India and in the last three years, the company has posted stellar sales figures. In fact, none of the company’s fiercest rivals like Yamaha, Kawasaki and Honda have their presence in the country which has helped Polaris strengthen its foothold in the Indian market. But, as of now, ATVs and similar off-road vehicles are not road legal in India which makes it extremely difficult for Polaris to get new individual customers. This is where Polaris Experience Zones — located in 22 different locations across India — should help the brand grow by not only giving adventure enthusiasts a chance to try their hand on off-roading but also educate the Indian buyers on the capabilities of ATVs. 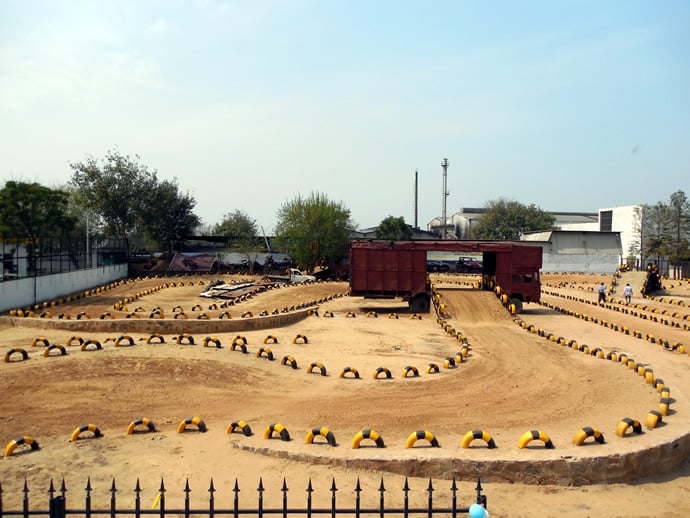 I was to visit the Polaris Experience Zone (PEZ) which is located in Dharuhera, Haryana, on the 27th of this month and it was scheduled right in the middle of the day which made me a little jittery. In fact the temperature had reached beyond the 44 °C mark by the time I reached the track and the weather gods were in no mood budge. The track is located 69km away from Delhi on the Delhi-Jaipur Highway (NH8) and it took me a little more than an hour to reach. The dirt track (seen in the picture above) is a part of adventure theme park named “Pickup Fun Zone” and along with the Polaris Experience Zone the place has its own restaurant and a sizeable conference hall for corporate clients. 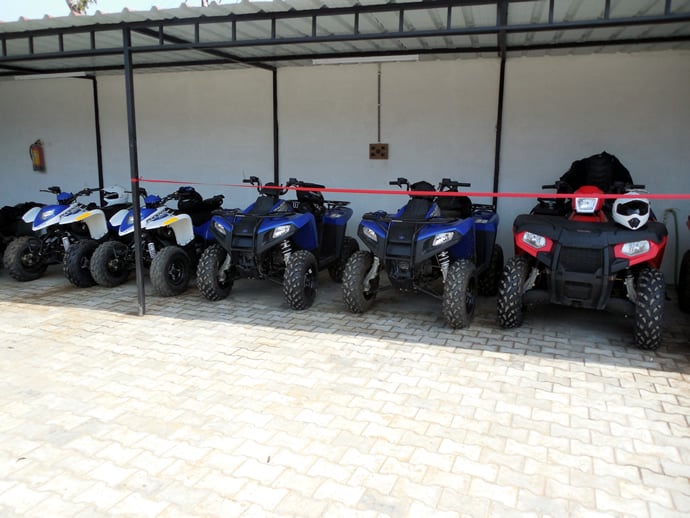 The track was recently inaugurated in the month of March and is the first PEZ in the North India. The Dharuhera PEZ has 10 Polaris ATVs at the track, which include the Phoenix 200, Sportsman Touring 500 H.O, Sportsman 90, Trail Boss 330 and the RZR S 800. The Sportsman 90 is the smallest ATV of the range and is for kids below 10; and the two-seater RZR S 800 is the most powerful option of the lot which offers a complete off-road experience to its users. Though the total area of the facility isn’t sizeable, but it must be said that Polaris has done a great job to construct a dirt track that is both interesting as well as fairly challenging. The track in total has five major obstacles which include four humps and one slush pit and it has been made in a way that it’s neither very difficult for the first time riders, nor is it so easy that you’ll get bored of it. In fact, the tight hairpin bends along with the humps, sand and stones will make you gun the throttle to do a few more laps. 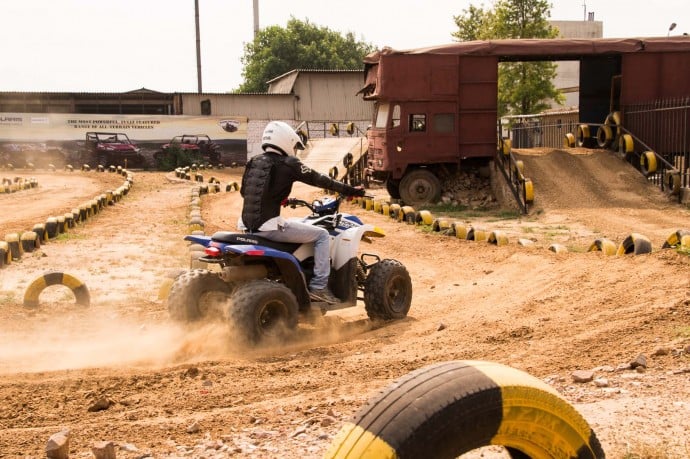 I got the chance to ride three of five Polaris ATVs available on the track and completed several laps around the circuit on each of them. I started with the Sportsman Touring 500 H.O (seen in the picture below) which is a mid-range, two-seater quad-bike with a motorcycle like setup for seating. The rear seat of the Sportsman Touring 500 has a massive back-rest and surprisingly both the seats are very comfortable. It has a 500cc 4-stroke engine which gives it an excellent power-to-weight ratio and is equipped with both two-wheel as well as four-wheel drive. All the Polaris ATVs have automatic transmission with the throttle on the thumb except for the RZR S 800 which has its accelerator pedal on the foot. The next I chose to ride was the smaller sized Phoenix 200 which was the most fun to ride around the track because of its smaller size and nippier handling. It’s an entry-level quad-bike by Polaris and has static two-wheel drive system. The Phoenix 200 is for kids above the age of 10 but despite of its smaller engine, the quadbike has enough grunt to take on challenging obstacles. At the end, I went with the range-topping RZR S 800 which is two-seater ATV with a car like seating layout and a steering wheel instead of the handlebar. It’s the most powerful of the lot with an 800cc engine and it can accelerate from 0 to 60 in just 4 seconds thanks to its amazing power to weight ratio. We’ll be doing a review of the RZR S 800 in the coming days, so stay tuned. 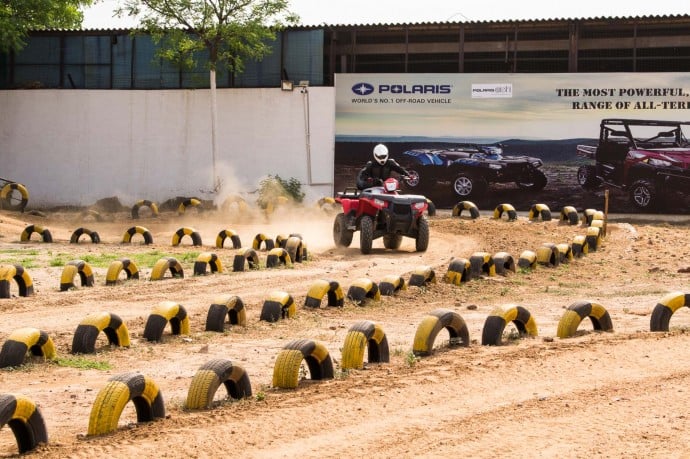 I spent more than an hour at the dirt track alone, and it was so much fun that the scalding heat didn’t bother anymore. The Polaris Experience Zones across the country offer a one-of-its-kind experience and is a great alternative to Go Karting which has become a little boring now. It also gives people a chance to experience off-roading without actually owing an ATV. A ride in one of Polaris’ single-seater ATVs will cost Rs 350, while a double-seat ATV ride will cost you Rs 500 which include two laps around the circuit and assistance and demonstration by professional riders of PEZ. All in all, my day at the Polaris Experience Zone was awesome and according to me, it’s a great place for Delhities to visit on the weekends to blow-off some steam. 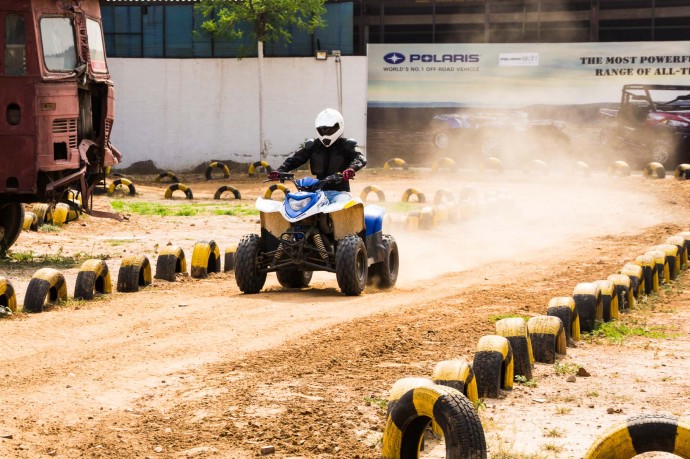 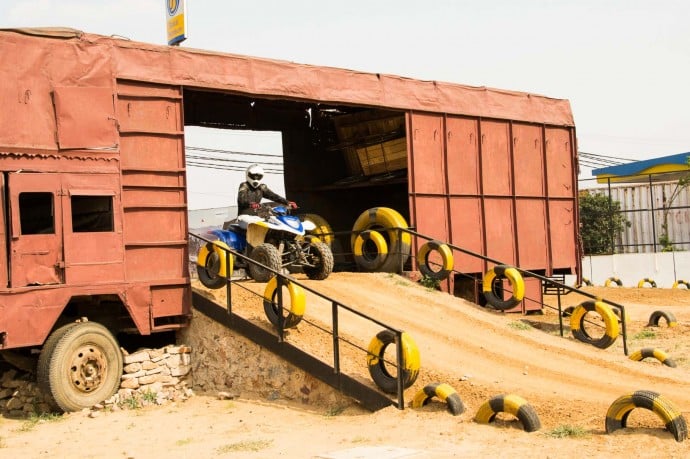 Getting ready to slide down the first obstacle of the track. The smaller size of the Phoenix 200
makes it very easy to control 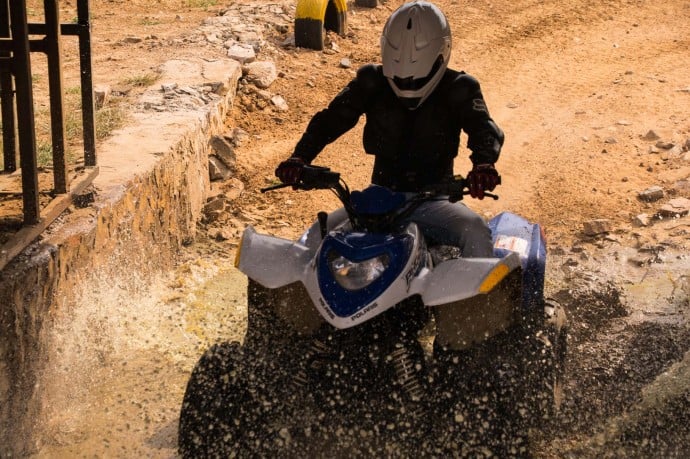 The Phoenix 200 splashing water in the slush pit 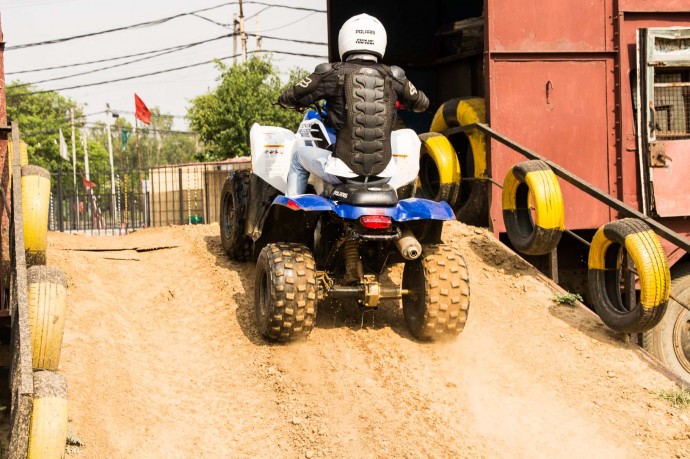 Climbing the final obstacle. The track has a total of four humps out of which three go through dilapidated remains of container trucks 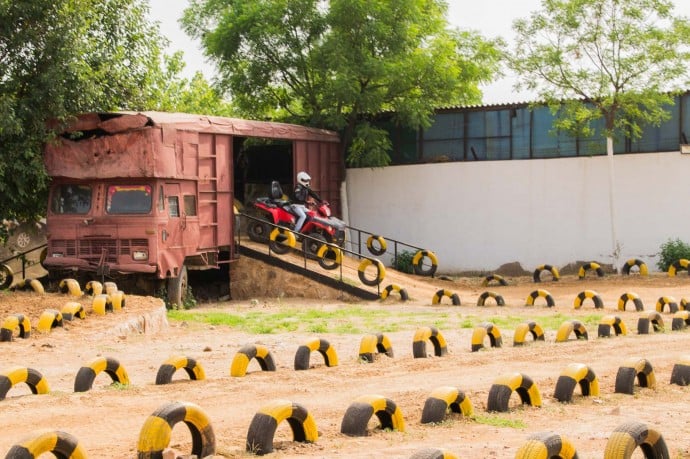 The bigger Sportsman Touring 500 H.O crossing the second obstacle of the track. The 500cc ATV has room to seat two and the seats are surprisingly comfortable 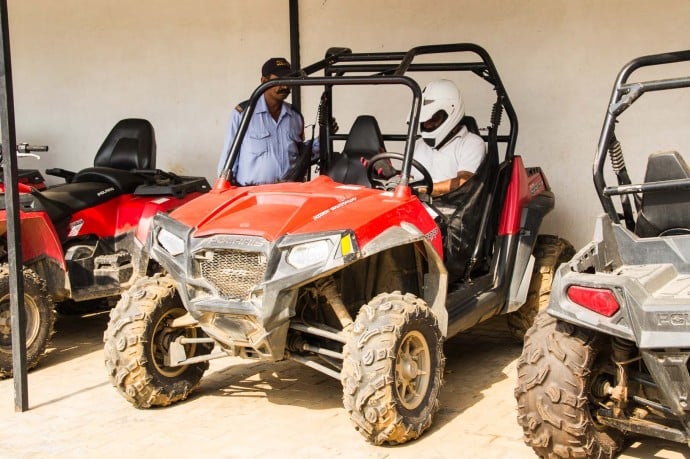 The range-topping RZR S 800 ready to hit the track 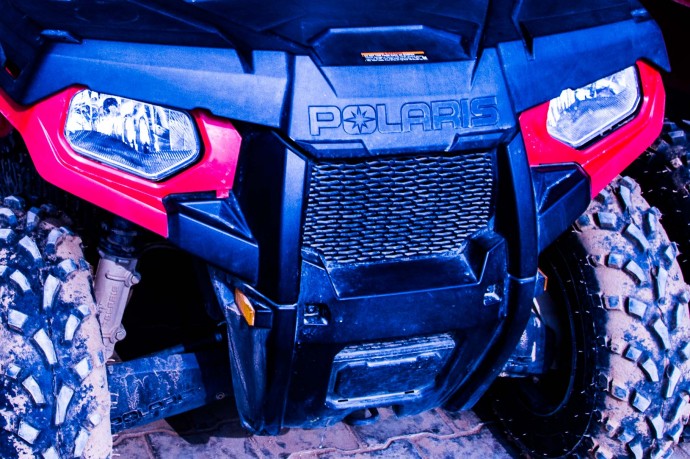 The front end of the Sportsman Touring 500 H.O 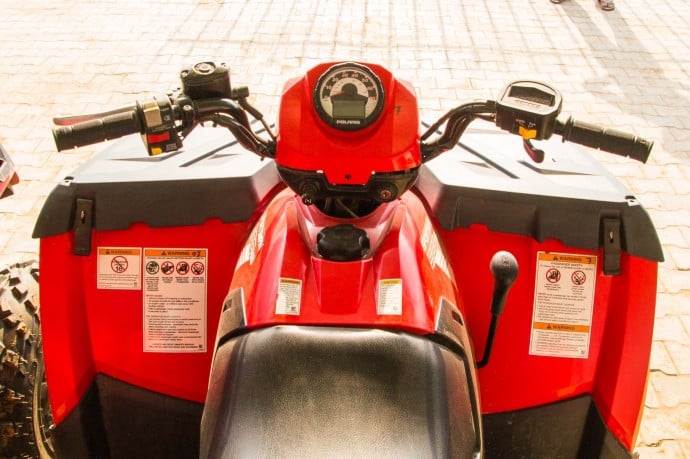 The controls of the Sportsman Touring 500 H.O. 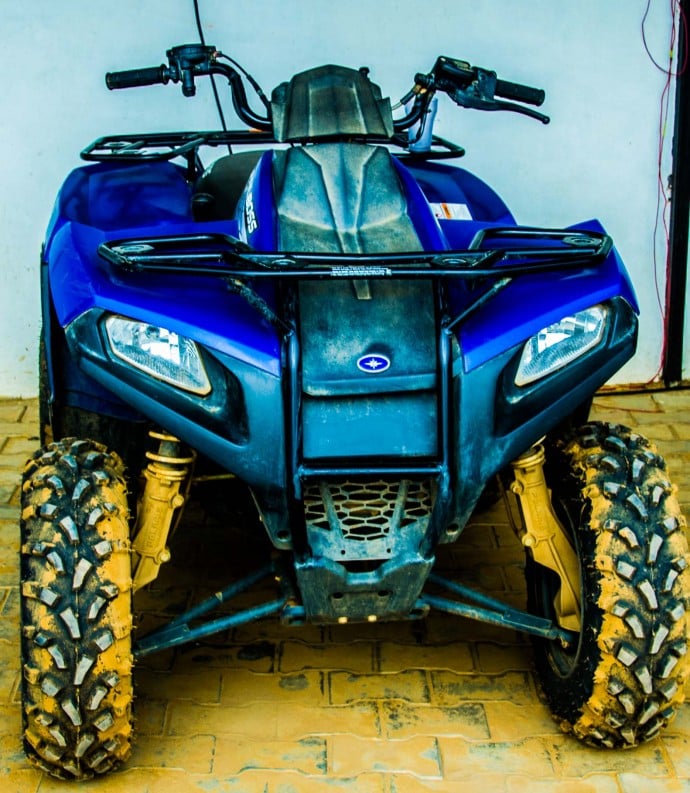 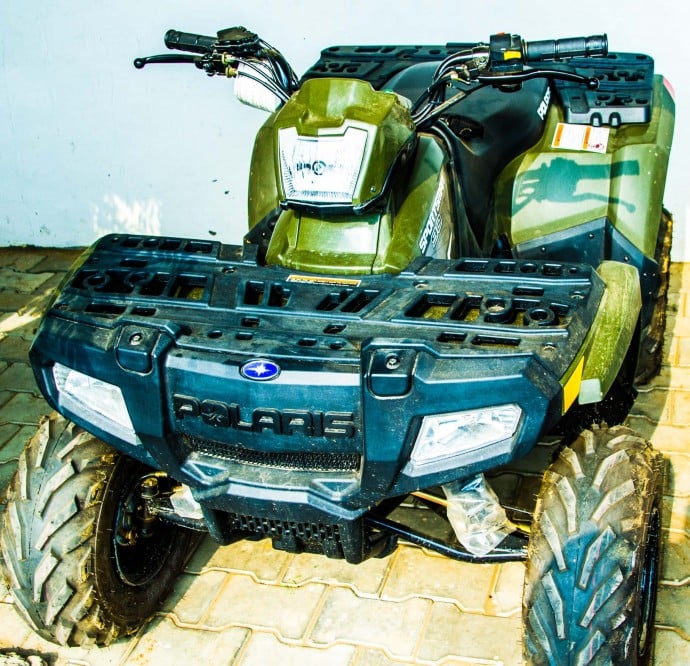 The Sportsman 90 is the smallest ATV of the range and is for kids below 10. It comes with a 4-Stroke Engine and is equipped with Parent-adjustable speed limiter.