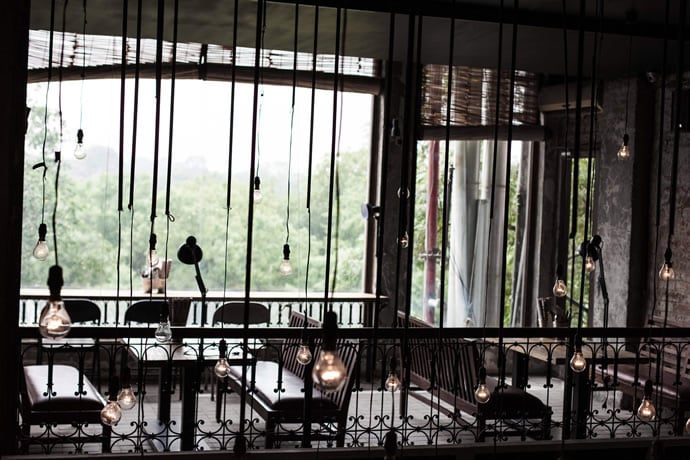 This time last week, we were reeling from excitement (and that occasional mild hangover) after having discovered one of the coolest culinary gems (think cotton candy cosmos and biryanis in enamel bowls). What made this discovery truly exciting, however, was not the food but the fact that this unique space was meant for catering to our favorite people- the freelancers.

The inception of co-working spaces may have already become a thing of the past (we remember the lovely people at A Little Anarky Films first telling us about it.) But with a Riyaaz Amlani spin on it, Hauz Khas Social is not just a bare brick hub for the bourgeoning start-up scene in the city but also The Longest Long Island Iced Tea (yep!) and some kick ass gigs. While we couldn’t muster up the courage to try this rather intimidating drink on either of the two days that we were there, we did get our fair share in some of their other tipply experiments after reporting about the launch here. Our first day there, we ran into Riyaaz Amlani who was not only set to give what they were calling a ‘Masterclass on the making of SOCIAL’ but also distribute ‘dawadarus’, Sambuca spiked shots in medicine bottles! But before knocking those back, we made sure we’d done enough “offline” mingling as Social suggests and gotten a good hold over the concept. While the Hauz Khas Social menu admittedly serves food and drinks “with a large helping of unorthodox” the space has its own convention-breaking going for it. It seems the man who gave this country cult coffee hangout ‘Mocha’ before moving on to other, ‘finer’ things, has once again directed his attention toward the youth and with a vengeance. With one level dedicated to those who were desperately in need of a work-desk-with-a-view (really, who isn’t!) and the other to well, those and the rest, Social is a recycled and upcycled furniture boasting, industrial seeming, office cum causal ‘fun-dining’ space. “Social has everything an office has; a boardroom, wall-space, conference facilities, wall-to-wall uber high-speed WiFi and built-in social interaction. And yes, there’s an app for that (in beta). The app lets you order and review food, check out the restaurant’s playlist (to like and recommend music) and even check in on what the other guests in the space are up to, to allow room for collaboration and interaction between tables. Once the day ends, the workspace at Social seamlessly shifts gears to become a high-energy bar.” And all day long, the ground floor is anyway there for those who were beginning to give up on the Village until bam! Floor to ceiling glass windows, 7-pages long newspaper style food menu (and a drinks menu, no judgment) and lake-adjacent seating! We heard Amlani articulate this entire message supported by a charming brain pickings-esque video (which we’ve made a point to share) over Screw Social Drivers, Cosmo Explosions, Acharoskas (your average Caipiroska made better with an Indian lime pickle twist) and spicy Southhall Fish & Chips, all superlative. The next day, we returned for the launch party where one thing was confirmed. Amlani did indeed intend to promote up and coming artists as he’d said and we waded through a sea of swaying limbs while Sandunes played yet another mesmerizing set. Another thing that happened was the biryani, despite being travelling cuisine, you know, the kind that travels in teetering trays during parties, was pretty not-disappointing. And we mean that in the best way because really, we were all set to be disappointed eating food in a place heaving with invited guests. But the rice preparation with all its sweet caramelized onion slivers and a little dip style raita topping was pretty generous to our grumbling stomachs. And the vibrant China Box seemed to be lining many a stomach that would’ve otherwise been caught blaming those raging L.L.I.I.Ts the next day. What can we say, except, Impresario Handmade Restaurants- emphasis on ‘Handmade’ –didn’t get that name for no reason. And for us, Hauz Khas Social marks the return of countless weekly trips to the Village!