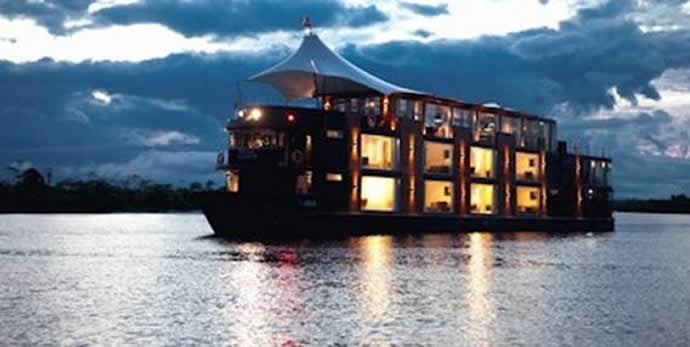 Experience the Ganges and Hugli River in luxurious boat cruise as the government has launched luxury boat cruises from Bengal to Bihar.The state government will formally kickstart its ‘open-waterway’ policy with the river cruise from Kolkata to Patna.

The luxury vessel will touch upon Bengal’s major heritage spots on its way to Patna. It would briefly stop at Barrackpore, Chandernagore, Kalna, Nabadwip, Mayapur, Plassey, Murshidabad, Farakka and further up at Bhagalpur, Monghyr and Patna. Mughal ruins at Rajmahal, East India Company relics at Patna and Monghyr, and Buddhist monuments at Boddh Gaya and elsewhere in this, the Buddha’s homeland, make for an exciting voyage through totally undiscovered territory. Built of locally made furnishings, it has 22 spacious cabins distributed over two decks. Each cabin has its own French balcony. Four of the cabins are built specifically for single occupancy. The ship’s amenities will feature a spa, saloon, dining room and large sun deck for enjoying the passing Indian rural panorama. The dining room of the r/v RAJMAHAL offers a great variety of East and North Indian delicacies as well as western dishes.

This will be the first river cruise of its kind in India, but others are soon to follow, says the Times of India. With Kolkata’s new “open waterway” policy, they will soon be signing on with Heritage River Cruise, another luxury river boat operator in the area.