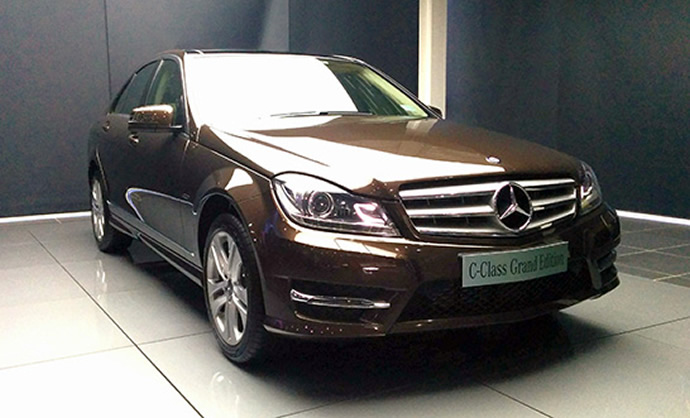 German luxury carmaker Mercedes-Benz is finally relasing its much awaited C-class Grand Edition. Touted last year, the all-new C Class is a celebration Edition is based on the very popular C 220 CDI.

The company has launched a C-class Grand Edition, to commemorate the 50,000th car produced from its Chakan facility. The Mercedes-Benz C-class Grand Edition gets an AMG styling kit on the outside with front and rear aprons, side sills, 17-inch alloys with AMG hub caps and chrome tailpipes. The 2014 Mercedes-Benz C-Class Grand Edition also gets the panoramic roof option as a standard fitment. The Grand Edition also gets a set of ‘GRAND EDITION’ badges on the front fenders. The dynamic and sporty exterior of the C-Class GRAND EDITION meets an equally sporty and individualistic interior. As far as safety features are concerned, there is ASR, ESP, BAS, Attention Assist, Agility Control and six airbags. Both the engines are fitted with Eco Start stop and are mated to a 7G-tronic autobox.

The C-Class Grand Edition is available in both petrol and diesel variants and is priced at Rs 36.81 lakh and Rs 39.16 lakh, ex-Pune respectively.