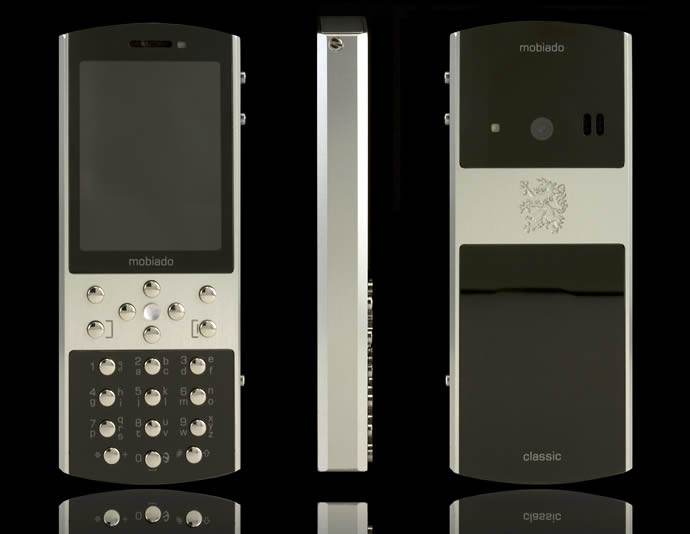 We at Luxurylaunches have a razor sharp focus on only one thing which is ‘luxury’ and we strive to cover only the best of the best. The world of uber-luxe mobile handsets and smartphones is very small with only a handful of companies across the globe servicing an ultra-niche clientele. Among them is Mobiado which in their decade long journey has managed to make a special place in the luxury mobile phone market. The Vancouver based company has given us some great handsets over the years which all exude high level of precision craftsmanship and offer simplistic design with clean straight lines and instantly recognizable aesthetic attributes. The luxury brand was recently launched in India through premium multi-brand electronic retailer ‘Mihaus’ who were kind enough to lend us three of their premium Mobiado handsets to do a hands-on review. This is the first installment of the three part Mobiado handset reviews which covers the 712ZAF mobile phone from the brand’s Classic line. 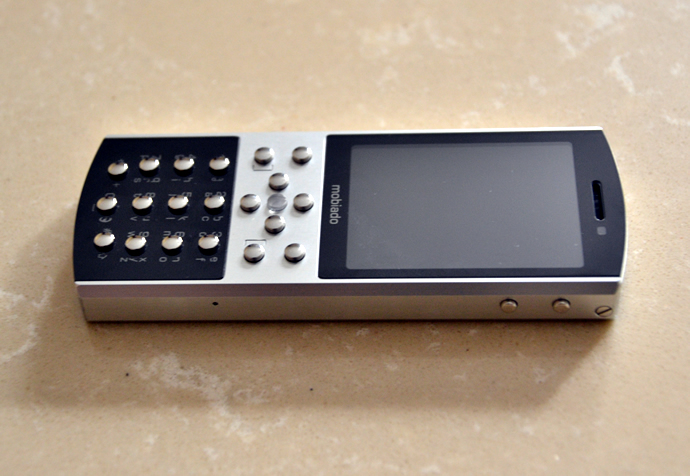 First Impressions
It is sometimes very hard to explain or assess what exactly makes a specific product uber-luxe and it is harder to decide if all the extravagance has really worked for it or not, as taste is something which is purely subjective. All the Mobiado handsets come in unique bar shaped leather boxes, which are peculiarly very long and this was no exception. Opening the box revealed the bar shaped Mobiado 712ZAF, which reminded me of the good old days when our mobile phones were simpler and more robust; the age when Nokia ruled. Mobiado’s Classic Line, launched in early 2010, was a replacement of the company’s Luminoso series; but all the handsets from the Classic Line continue with the same trademark shape and the instantly recognizable round rivet like buttons laid-out in the classic T9 pattern, but offers a thinner body and advanced features as compared to its predecessor. It’s been a while since I have either used or seen a handset with T9 keypad, or in fact any kind of keypad for that matter, to which I was strangely excited. Wrapped in a soft cloth, the handset is accompanied with very basic accessories which include a data cable and headphones which look normal – nothing extravagant there. Picking up the handset, which weighs quite a bit, the first thing I noticed was its stark simplicity. As opposed to Vertu or Tag Heuer phones which are its fiercest competitors and use leather on the body-shell – mostly on their backplates – the Mobiado 712ZAF Classic has a smooth and uncomplicated body. But the craftsmanship on the aluminium chassis and the CNC machined Mobiado logo is truly elegant, I must admit. I had a fair idea of the handset before I got my hands on it, but didn’t know any of the specifics as the company is quite tight-lipped when it comes to revealing beyond the basic specifications, so I didn’t really know what to expect once I switch on the handset. Before I switched it on, I gave the handset a glance to check the build quality and, in particular, look for any design anomalies. I couldn’t find any, except that it was too simple for my taste. Switching it on, I was surprisingly greeted with the old Nokia boot screen graphic and the tone typical to Symbian OS, which I don’t even remember when I last witnessed, which made me instantly sceptical about it. Mobiado doesn’t officially state the operating system running on the phone but as far as I could gauge, it was running on an older release version of the Symbian S60. I was also a little unsure if the small round buttons will be comfortable to use, but they were surprisingly easy to operate. The centre button on the navigation keys is an illuminating sapphire crystal where as rest of them are made of stainless steel. In combination with the aluminium body, the stainless steel buttons look good. So as far as the initial impression is concerned, there are a few things that I like and some that i don’t. 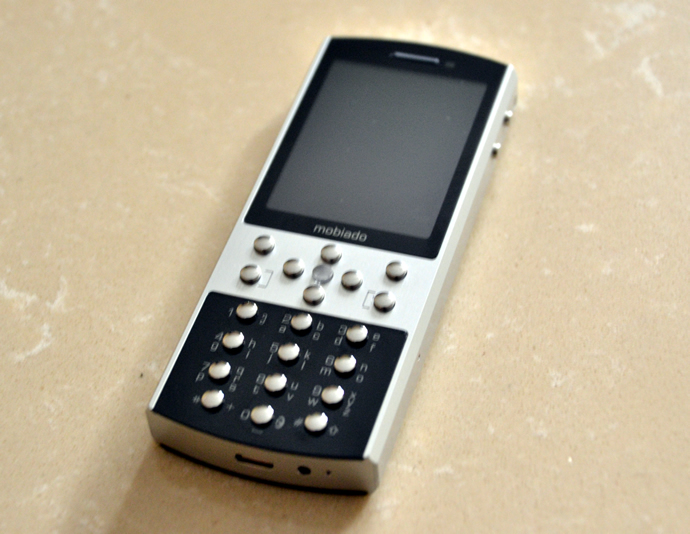 The design and the build quality
Coming to the design of the Classic 712ZAF, the handset has a candybar shape similar to the Mobiado handsets from the Luminoso series. It’s been more than half a decade that I personally shifted to touch screen phones, but unlike the commercial biggies the luxury mobile phone makers have started incorporating touch screens on their handsets only recently and still, a majority of their models are candybar shaped. The Classic 712ZAF is sold in six different colours including black, black satin, blue, grey, red, and silver, but the one which we are reviewing is black with an aluminium chassis. The front of the body is made out of sapphire crystal plates which are inserted into the aluminium frame making the handset very tough and almost impossible to scratch. Even the aluminium used for the phone is of military grade used for making aircrafts, which is polished or filtered glass bead blasted, and then anodized coated to produce a rock hard ceramic coating. Though the aircraft grade aluminium is used to make the phone light weight but it still weighs 143g without the battery making it quite heavy. But the aluminium chassis along with the sapphire crystals and the heavy weight gives an impression the handset is almost indestructible. The round rivet-like buttons are made of stainless steel, except for the centre key which is made of sapphire crystal. Even the screws are made of stainless steel and feel like a part of the design. Turning the handset over, the rear plate is also made of sapphire crystal and the Mobiado logo is CNC machine engraved in the aluminium frame. The rear cover over the battery compartment is made from a single sapphire crystal and opens in a unique sliding action, which is a trademark of all Mobiado handsets. The sliding backplate makes it very easy to open and close, so that users won’t have to sweat over using their nails to pull it open. That is one feature which caught my eye in particular. On the right hand side of the device are the volume rockers and a dedicated camera button, all of which are also made of stainless steel and, needless to say, feel very solid. In total, 179 carats of sapphire crystals have been used on the Classic 712ZAF. There is no doubt that the build quality is absolutely immaculate and I could find any faults, though I tried hard and the tried and tested candybar shape is also endearing to an extent, but the simplicity offered by the Mobiado 712ZAF is not that appealing for someone like me and I will rather prefer the Mobiado 3AF from the Professional Line. 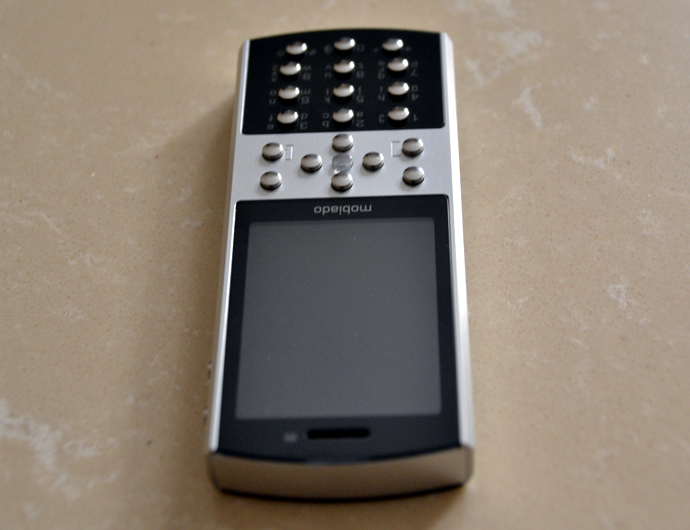 Hardware inside the sleek aluminium body
As the Mobiado Classic 712ZAF itself looks that simple with bare basic features on the outside, it’s hard to expect anything cutting edge on the inside. But most or rather almost all the high-end luxury mobile phone-makers don’t focus too much on hardware specs. In the world of luxury mobile phones, technology crawls at a very slow pace, whereas in the smartphone market, things gallop at a blistering pace – it doesn’t take long for a latest technology to run out of steam and become redundant. But, in the realm of luxury smartphones, a few years old isn’t that bad. In fact the Mobiado 712ZAF came out in January 2010, which makes the device more than 4 years old. As mentioned before, Mobiado likes to stay tight-lipped on the exact specs of the handset, so we aren’t sure on which version of Symbian was the handset running, but nevertheless, the OS is outdated. We even had a feeling that the hardware of the device has been taken from a specific Nokia model. As far as other specifications of the hardware are concerned, the handset uses quad-band GSM EDGE 850/900/1800/1900, but isn’t 3G enabled. The display of the Classic 712ZAF measures 2.2 inches diagonally and has a dismal resolution of 320 x 240 pixels. The handset also features two microphones for voice cancellation and some quirky features like double tap function to mute or reject calls. On the back, it has a 5MP camera with auto-focus and LED flash and the quality of the shooter is acceptable, if not too good. The camera also has its own dedicated button on the right side of the body. On the software front, it has all the basic features offered by old symbian phones such as music player, organizer, gallery, notes etc. But don’t expect anything fancy. And that’s about it. As expected, the handset scores low as far as the hardware and software are concerned and the 5MP shooter is the only saving grace. If you are tech-savvy and depend a lot on apps, this phone might not be an option for you and you should look for other options from the Mobiado range. 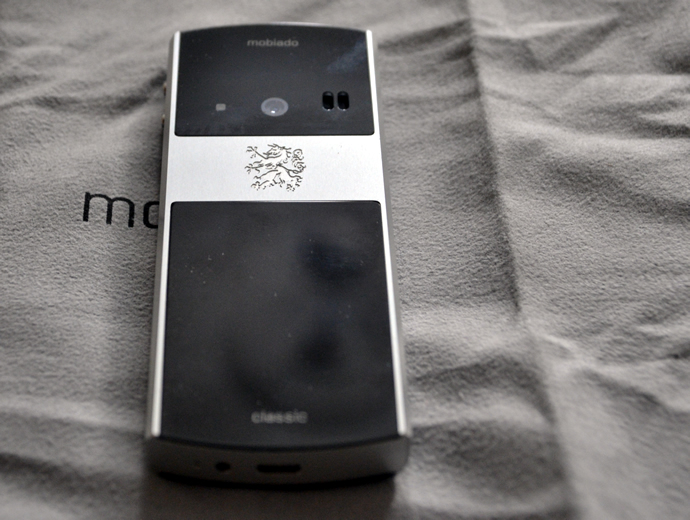 Luxury Quotient – the thing that matters the most
In this section we discuss the most important part of the review which is the luxury quotient of the Mobiado Classic 712ZAF. One thing is for sure that well-heeled buyers looking to buy an uber-luxe mobile handset give the luxury quotient the most importance, even at the cost of making compromises on hardware and software features. The foremost quality of a good luxury handset should be its ability to stand out from the rest and make its users feel really, really special. For uber-luxe handsets, we are habituated at looking at devices with high-quality leather parts and the body studded with precious metals and stones. As far as this specific model by Mobiado, those things are missing and though the build quality is absolutely splendid, the device in itself fails to stand out. All the rich qualities of the Classic 712ZAF are rather unimposing and can only be observed if the device is closely noticed. The mobile phone is in no way flashy, but that is one feature some people do look for. But the question is would you spend so much to buy something that is special yet inconspicuous.

Verdict – is it worth a buy?
Which bring us to the final section of the review. The most pertinent question is – is it worth a buy? As discussed in the last section, the handset indulges in extravagance but it is not immediately noticeable. So you need to ask yourself, do you want to buy a mobile phone which is understated. Another thing to keep in mind is the fact that the handset doesn’t come with too many features and as a standalone mobile phone, it isn’t too practical in today’s age where we are all hyper connected. But on the upside, it would be perfect for someone who is averse to new technology and loves old-school mobile phones with basic features and would just use a phone it was meant to be – “to talk”. Luxury is defined by price and it’s also one of the more crucial aspects that attribute to the prestige of a luxury product. The Mobiado Classic 712ZAF is available at the Mihaus stores across the nation with a price tag of INR. 2,93,440. So, if you are looking for a special luxury mobile phone which does not scream of bling, the Mobiado Classic 712ZAF can be an option worth a try.