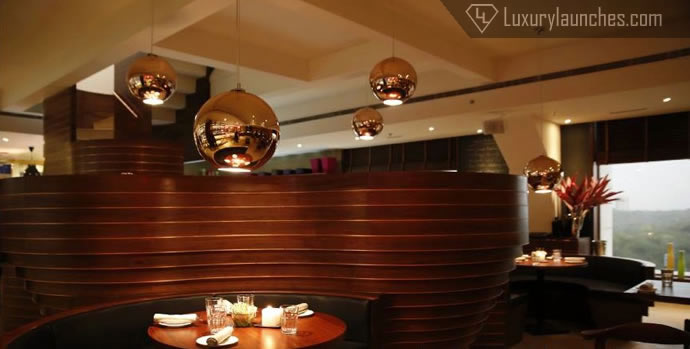 If there is such a thing as teething trouble, it seemed to have put Indigo Deli all over the Internet. And then there were the glowing recommendations. With so much going on, the entry of Mumbai’s darling deli had us perplexed. So one Sunday, we set out for its swanky venue within Ambience Mall in Vasant Kunj. Rookie mistake. From irate customers rattling the restaurant podium, it became plenty clear that come weekend, this is one place with hour-long waitlists. And mind you, that’s after making prior reservations. Once in, the food did all the talking I’d have said. Wrong. Over the cacophony of exhilarated weekend revelers (they had made it in after all, from among what, a million?) and that is, not including bawling babies, I’ll admit it was mildly frustrating to try having the real Rahul Akerkar powered experience. There was, however, the smell of success. And creamy Egg Benedict-s! There! I said it.

Atmosphere
Blank walls stared at us as we took our seats and for once we were thankful. It was almost as if the winning team of Rahul Akerkar and Jaydeep Mukherjee had correctly predicted how the capital would welcome Mumbai’s favorite American comfort-food offering – by exploding within it (it’s another thing that this definition of “American comfort-food” is highly permeated by Italian influences). The hype helped. And if you still find the décor lacking, just scoot over to the dessert counter, lot’s to see there! Or get a table closest to the open kitchen. We do have one slight complaint though- the shelf stacked with deli offerings could do a lot better. Upon asking the manager, Mr. Chetan, we found the mustard of the walls travels up to another identical section, which we’re assuming will soon be open. Meanwhile, those of you wanting to get higher can (besides losing themselves to chef’s recommendations) opt for the slightly elevated seating (reminded me of my early days at Mumbai’s adolescents’ haunt Tryst where “high-fliers” would take over the higher tables.) Food and Drink
But coming back to chef’s recommendations, Jaydeep Mukherjee wasn’t anywhere in sight (although upon another visit, we learnt from him of his hands-on involvement in the Delhi outpost). The manager did fill the shoes quite well. Sending over two souperb kickstarts to our own weekend’s reveling. While the first was an airy chicken broth with enough meaty slivers to make us happy along with bok choy, zucchini and mushroom, the other was a silken soup of carrot and ginger, with the right amount of zing and sweetness. The roughly sliced loaf of brown bread was great for mopping up the remains. Next came the Eggs Benedict, of which there were none. Remains I mean. These seemed to be travelling to several other tables and we could see why. With slightly saltine ham wedged between a poached egg and a bouncy English muffin to each plate, these had just the right amount of hollandaise to call them indulgent. A nice mountain of caramelized onion and potato shavings made the balancing accompaniment. And since we had wondered aloud what fresh fruit slushes were available, Mr. Chetan was kind enough to send over jamun and peach flavors. The first, a sharp purple potion was sweet and sour, exactly like the fruit, albeit in a frozen form. The second was a more tame juicy drink. After the sharp kick (in my case) from the jamun slurpy, my palate was somewhat numbed from the Pizza Carbonara. While many may have encountered the pasta counterpart that goes by that name, we could deem this a bacon-specked success but one that requires a generous chili flakes sprinkling, something to offset the creamy sauce and sweet, onion rings. The next one, a risotto of wild mushrooms and red wine reminded us we’d had better. So besides the al dente nature of the rice, which made for a great bite each time we took a hit there really wasn’t much else to appreciate. Things took a turn when shot glasses appeared. Now I know what you’re thinking but that’s not why. Indigo doesn’t have a liquor license yet, which is just as well, because it has this- an array of in-house ice creams. We fell in love with the Butter Pecan (enough to ask for a full serving) and the Rum & Raisin, which might I add, totally makes up for that missing license. The Belgian Chocolate and Salted Caramel came in close seconds, while Hazelnut stood third on our list. What we found a tad overrated was the Dulce de Leche. This condensed-milky house specialty held none of the fascination the others had, and if you attribute that to its simplicity, we think a good vanilla bean would have fared better. Not big on ice cream? Get out! Okay wait. Try the baked yoghurt. We’ve always liked what frozen yoghurt did to the country and this baked version isn’t half bad either. What makes it even better is the multiple flavors! We especially liked the Cinnamon and the fact that this is a healthier as well as a more interesting counter to ice cream means it may well find its way onto the orders of a lot of health conscious eaters.

Recommendations
Do not go on a weekend. That’s the one sure thing we’ll tell you. Unless you want to be mauled by a mob! Or better still go to Mumbai, where the furor has long died down, they have a good staff to guest ratio and lesser performance pressure. Comfort food made at ease is probably what crowned the term. But bumper sticker-talk aside, do pick a breakfast-y hour and indulge in the Eggs Benedict! And do not, I repeat do not forget to ask for ‘Soup of the day’. With any luck, you’ll be served the chicken broth or the carrot-ginger.

Verdict
This place is worth the wait. And by that, I mean, worth the wait till it’s made its mark. Maybe then you’ll have a better shot at understanding what led to the Indigo Empire and why every “must-dos in Bombay” list never misses the Deli as recommendation. Maybe then, the shelves will also be arranged better and you might actually want to take back that Indigo deli marmalade that once made a nice present for my mother. P.s.: Belated Happy Birthday Indigo Deli Colaba!