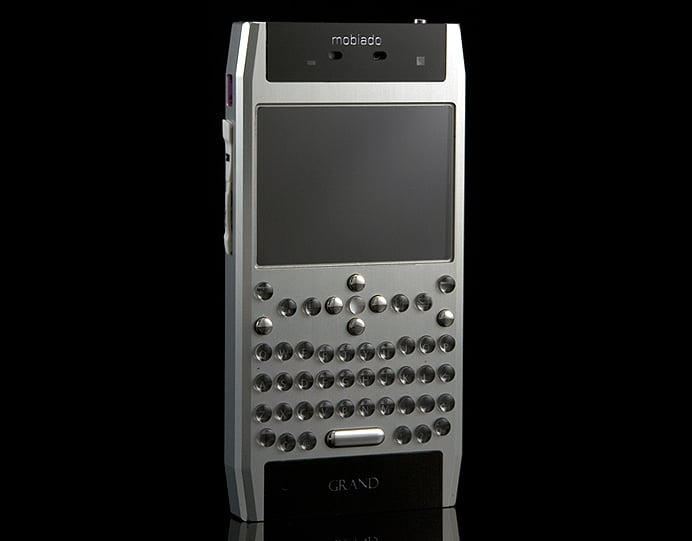 Last week, we reviewed the Mobiado Classic 712ZAF as the first instalment of the three part Mobiado handset reviews. This week we move onto the second offering by the Canadian luxury mobile phone maker, Mobiado Grand 350PRL, which is a business phone with a QWERTY keypad. The handset is available in India exclusively through premium multi-brand electronic retailer ‘Mihaus’ who lent us the Mobiado phones for the reviews. In this review, we discuss all the crucial aspects of the handset and at the end asses if the Grand 350PRL truly justifies its price-tag. 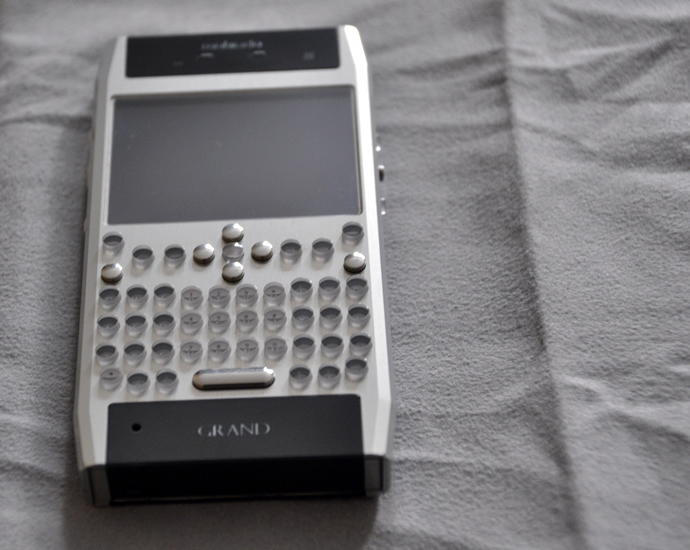 First Impressions
The Mobiado Grand 350PRL is the brand’s first QWERTY keyboard handset and like all the other Mobiado phones, comes in a long bar shaped black coloured leather box. Inside the box, the mobile phone comes wrapped in a plastic cover and is accompanied with a soft cloth and basic accessories including the headphones and data cable and charger. After checking out the Mobiado Classic 712ZAF and comparing it with the Grand 350 Pearl White, the latter felt much more solid as far as the build quality is concerned and also scores higher in terms of the luxe factor. Peeling the handset out of its plastic cover, the first thing that I noticed about the Grand 350PRL is its heft. The mobile phone weighs 217g with the battery inserted which is quite a bit. But, along with the sturdy construction, the added weight gives the mobile phone an indestructible appearance; and it surely is. Just like all the other Mobiado devices, the Grand 350PRL also has a clean and simple design with sharp lines and uncluttered appearance. I must admit, its aluminium body felt great in my hands. Unlike the 712ZAF, the Grand 350PRL’s keyboard has a combination of both clear sapphire crystal as well as stainless steel keys. Switching on the handset, I noticed that the sapphire crystal keys glow with a purple hue and it not only looks good but adds to the luxury quotient of the mobile device. The back of the phone is inlayed with sapphire crystal stylized with a mother of pearl backplate covering the battery compartment which is available in four different colours; the one we had was white in colour. The white mother or pearl backplate looked great in combination with the phone’s other design features and especially women would find the white colour more attractive and appealing. As mentioned before in the Classic 712ZAF review, Mobiado doesn’t reveal the operating system and all the technical specifications of its handsets, but on powering the device, I was greeted with the old Nokia boot screen sequence prompting that it was running on a Symbian OS. In fact, as per what I know, the handset runs on the S60 3rd Edition Symbian OS and the hardware of the handset is based upon Nokia’s popular E71 smartphone. So the hardware and the software might not be cutting-edge, but the Grand 350PRL does offer features like 3G, WiFi, GPS along with location based services and document editor with Microsoft 2007 support. Overall, if you compare the device spec for spec, its biggest competitor is Vertu’s Constellation Quest, but the Mobiado handset outscores the Quest in terms of build quality and luxe factor. If you choose to look beyond its hardware and software specifications, the Mobiado Grand 350PRL has all the ingredients to qualify as a great luxury mobile phone. 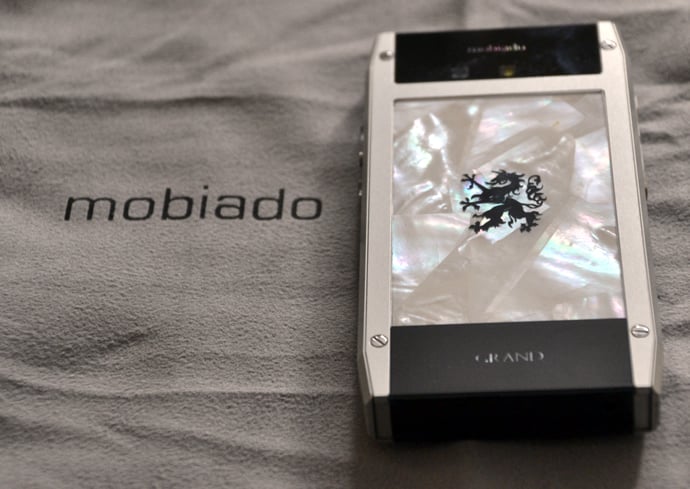 The design and the build quality
Coming to the design of the Mobiado Grand 350PRL, the mobile phone has a flat design with a QWERTY keypad. It’s the first and the only handset by Mobiado which has a physical QWERTY keypad barring the 350 Pioneer which is a limited edition version of the same device. Though the basic construction and the shape of the device are same as the Nokia E71, but as mentioned before, the build quality is superb. The chassis of the Grand 350PRL is made up of aircraft grade aluminum with a clear anodized frame. Another notable thing about this Mobiado handset is that it has 271 carats of inlayed sapphire crystal which is the highest for any mobile phone. Majority of the keys on the keypad are also made of sapphire crystals that glow when the backlight is on. The glowing keys are very soothing to the eyes and are not over imposing. Even the keypad felt ergonomically comfortable which was very surprising. Considering the keys are very small in size and rivet shaped, I didn’t find any discomfort typing on the QWERTY keypad. But yes, writing lengthy messages and especially emails might be an issue. It has ruby infrared screen and a front facing camera just above it. On the rear, the mother of pearl backplate is its central feature. The plate opens with the same sliding mechanisms found on all Mobiado handsets and unique to the Canadian company. Most of the smartphones these days either don’t have a detachable backplate or they are simply nasty as far as the quality is concerned. That’s not the case with this phone and the big Mobiado logo on the plate only adds to the aesthetics of the device. Another prominent design feature of the phone is the stainless steel screws around the body of the Grand 350PRL; they are an important part of the overall design and look great. The power button is placed at the top of the handset and on the right side of the phone are the volume rockers. The design of the Grand 350PRL is clutter-free and the sharp lines of the handset add to its appeal. The build quality of the phone is amazing and though it’s heavy as compared to other handsets, but it feels robust. 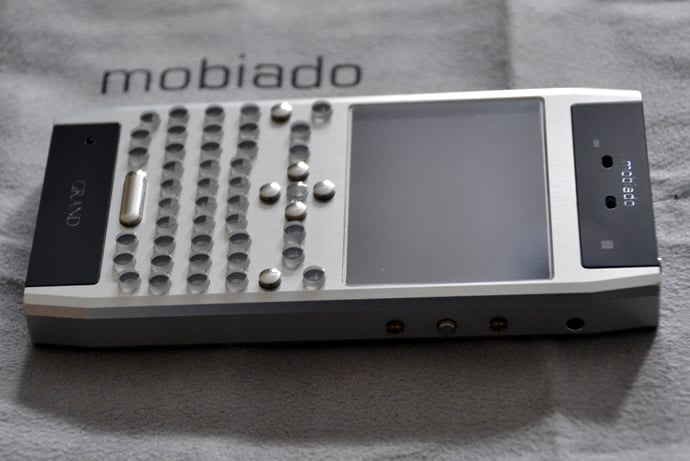 Hardware inside the luxury smartphone
Not for a moment should we mistake the Mobiado Grand 350PRL as a mainstream mobile phone; it’s a fashion smartphone which is a symbol of luxury. So we shouldn’t unnecessarily fret over its hardware and software specs. It’s not that this mobile phone is devoid of features and only screams of opulence, but it doesn’t stack up against the likes of latest smartphones. But comparing them would be sheer silliness. Most of the hardware and software of this device under the hood is based on the Nokia E71 and doesn’t come with any modifications. As far as the hardware is concerned, it has quad-band GSM support along with 3G with HSDPA. It comes with a rather small sized landscape 2.36″ 16M colour display of QVGA resolution and 3.15 megapixel auto focus camera with LED flash on the rear. The Grand 350PRL has WiFi and built-in GPS receiver which are two of its key features. On the software front, the phone runs on Symbian 9.2 OS of the S60 series and though don’t expect the best apps from it, but it has enough features to take care of all your basic needs. 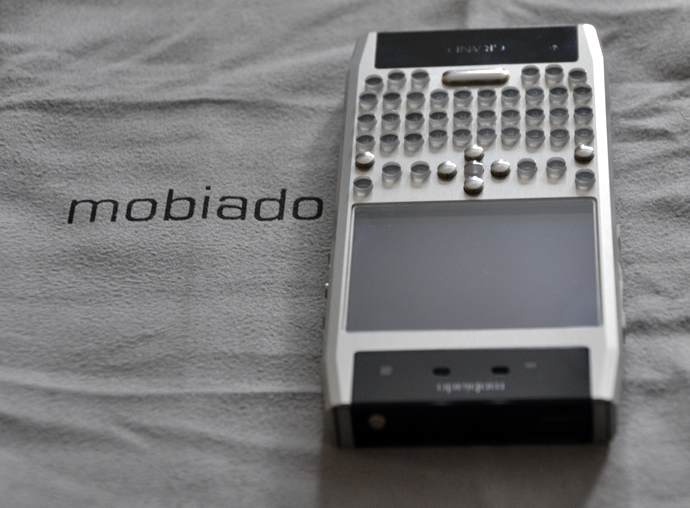 Luxury Quotient – the thing that matters the most
This brings us to the most important aspect of the review; how well does the Mobiado Grand 350PRL score on its luxe factor? To be frank, the best thing I loved about the phone is its build quality. I simply couldn’t find any faults or reasons to be critical. This specific handset might not be studded with gem stones or come with gold inlays but that’s what sets it apart from the rest. The simplicity of the handset is properly balanced; it’s neither over-the-top nor bland to look boring. I felt, the handset does not necessarily scream of opulence but definitely scores high on elegance. The design structure of this phone with its physical QWERTY keypad is a bit old but the overall aesthetics of the Grand 350PRL is still appealing. 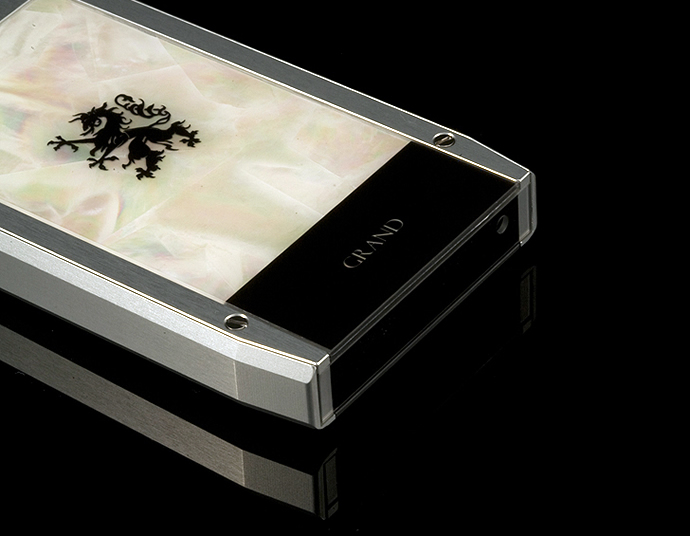 Verdict – is it worth a buy?
Finally we end the review with the crucial question, is it worth a buy? The Mobiado 350 Pearl White is the cheapest of the three Mobiado phones we received from Mihaus and is priced at INR. 2,21,254. As mentioned in the last section, the phone strikes a perfect balance between being luxurious and yet not appearing to be over-cluttered with adornments. So if you are in the market to buy a luxury smartphone, the Mobiado Grand 350PRL won’t disappoint you.