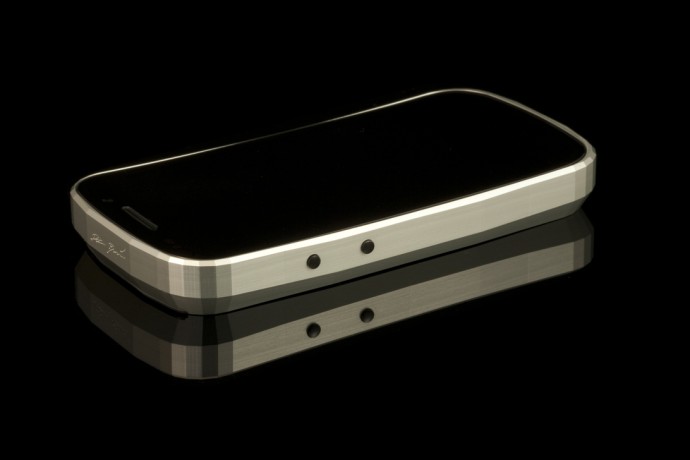 We have finally reached to the third and final installment of the three part Mobiado handset reviews, and this week we closely review the Canadian luxury mobile phone maker’s Grand Touch Silver which is arguably the most feature rich offering in the line-up. The Mobiado Grand Touch handset is the company’s only Android powered smartphone which comes with a touch screen and is available in three different iterations – Grand Touch Executive, Grand Touch Silver and Grand Touch GCB. Luxury multi-brand electronic retailer ‘Mihaus’ lent us the Grand Touch Silver for the review and I must admit, out of all the offerings this one is definitely my favorite. As the handset comes with an Android OS, it was easier for us to test the smartphone’s hardware and software, so let’s proceed section by section to find out if the Mobiado Grand Touch Silver is truly impressive and justify its price-tag. 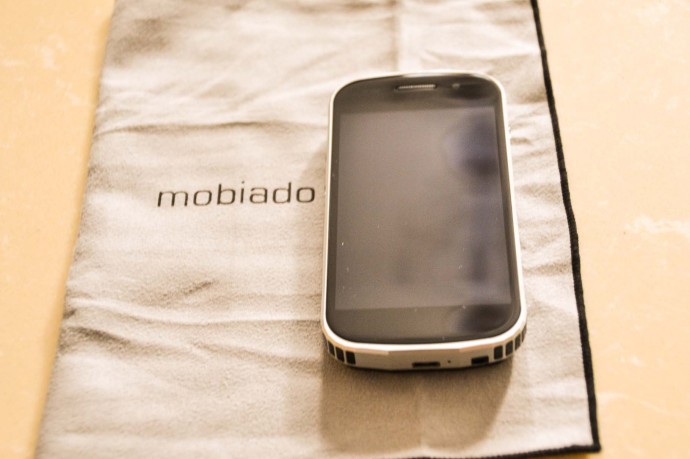 First Impressions
There are only a handful of companies around the world that make luxury mobile phones and they cater to an uber-exclusive clientele. It is only natural to compare the Mobiado handsets with Vertu which is its biggest competitor, and as far the Mobiado Grand Touch smartphone is concerned, its biggest rival in the market currently is the Vertu Constellation which is also an Android powered smartphone with a touchscreen. Both the handsets relatively have similar hardware and software specifications and there is very little to choose between the two. After having reviewed the Mobiado Classic 712ZAF and Grand 350PRL which comparatively have simpler specifications, my expectations from the Grand Touch were high. Newer hardware and Android operating system obviously means the buyers won’t have to compromise on latest apps and other functionalities which are very important in a phone in today’s age. The phone is similarly packaged as the other two Mobiado handsets and comes in a slender, long rectangular leather box. Unboxing the unit, the first thing that caught my attention was the girth of the Grand Touch. Unlike the new Android handsets we are used to seeing, the Grand Touch is quite thick and weighs quite a bit. To be precise, the smartphone weighs 178g without the battery inserted, but the build quality feels solid. But picking it up in hand, the phone’s thickness didn’t feel wrong or uncomfortable. In fact there is a slight curvature to the phone which makes it easier to grip it in the palm. Another thing I noticed about the Grand Touch is its simplicity. The design isn’t busy like some of the other luxury handsets we have seen and that has been achieved without compromising on its luxury quotient. I would rather say that the CNC machined anodized aluminum body screams of luxury. Mobiado even partnered with Aston Martin to come up with a limited edition version of this smartphone. At the bottom end of the phone, Mobiado’s lead designer Peter Bonac’s signature is etched on the aluminum body which is also one of the most eye catching features of the Grand Touch. On the backside of the phone, the backplate bears the Mobiado logo. Switching on the handset, I was greeted with the usual Android UI with no additional layers of software on top. Unlike the other Mobiado mobile phones, it was fairly simple to find out about the device’s hardware and software specifications. This Mobiado phone is nothing but a Nexus S dipped in premium materials. So as far as the first impressions are concerned, I was pretty impressed and my hands were itching to dig deeper and explore more. 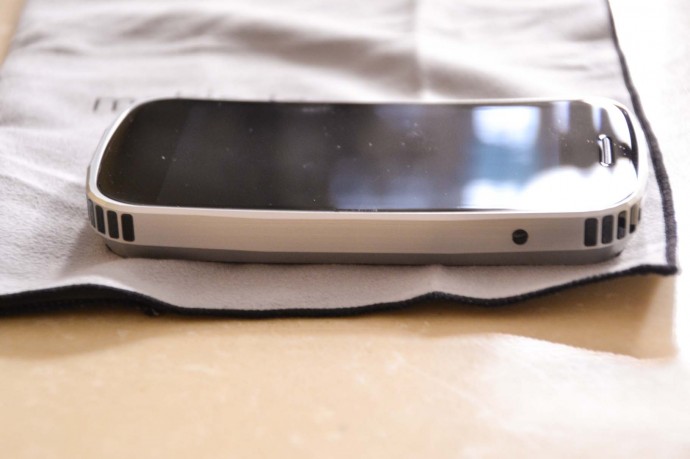 As mentioned before in the previous section, the design of the handset is uncluttered and simple just like other Mobiado phones. This device was designed by Mobiado’s lead designer Peter Bonac whose signature in machine engraved on the bottom part of the phone. The Grand Touch Silver has sharp straight lines and the build quality is simply superb and just by looking at it, it’s hard to believe that it’s a Nexus S from inside. Like the two other Mobiado phones we reviewed earlier, the Grand Touch Silver is also made using aircraft grade Aluminum and the unique geometric shape of the handset it’s superb to look at. In total, 139 Carats of sapphire crystal are used on the Grand Touch Silver. The battery cover on the rear side is made entirely from one piece of sapphire crystal and the phone is available with or without black painted sapphire crystal inlays in the corners. The one we received had the sapphire crystal inlays and according to me, it’s a great design feature and looks great along with aluminum body. The Mobiado Grand Touch has a slight curvature to the handset which makes it easier to hold the phone and also adds to the aesthetics of the phone. I personally loved the curvature and according to me it balances the thickness of the phone. On the rear, the handset comes with the similar sliding battery cover that’s unique to Mobiado handsets, but this model is specific is a little different than the rest. The entire back of the phone is comprised of 2 pieces of sapphire crystal connecting at a sharp angle. The screws used on the phone are gun metal black stainless steel and the buttons are black painted sapphire crystal and look amazing. I can only say that the except for the thickness of handset, the design and the build quality of the Grand Touch is truly great and it will especially appeal to those who are looking for something other than soft-touch leather wrapped premium mobile phones. 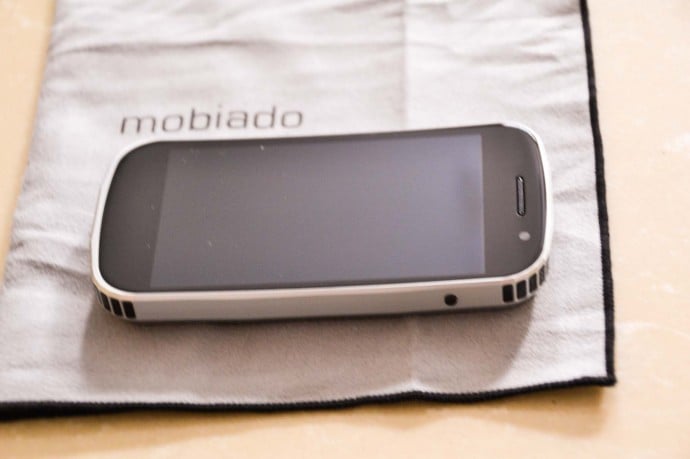 Hardware and software inside the luxury smartphone
It is only recently that luxury mobile phone makers have started making handsets with relatively newer hardware and software specifications and the Grand Touch was Mobiado first handset with Android OS. The phone is based on Samsung’s Nexus S smartphone and both the handsets share all the hardware and software elements; none of it have been altered. There is little doubt that the Nexus S is a solid product and there is nothing wrong with it. The only problem is that it has become a little old now and though most of the current apps are compatible and work, it might become a problem sometime in the future. Under the hood, it features a 1 GHz Cortex-A8 processor and runs on Android 4.1 Jellybean; but it won’t get any more updates and isn’t upgradable to Android 4.2 or higher. It features an ordinary 5MP camera on the rear and a VGA shooter on the front for video calling. Another possible shortcoming of the handset is that it doesn’t have 4G but it isn’t a problem in India as of now. It might not have the latest hardware and software but as a luxury smartphone, it has enough features to get you through will all the basic necessities. 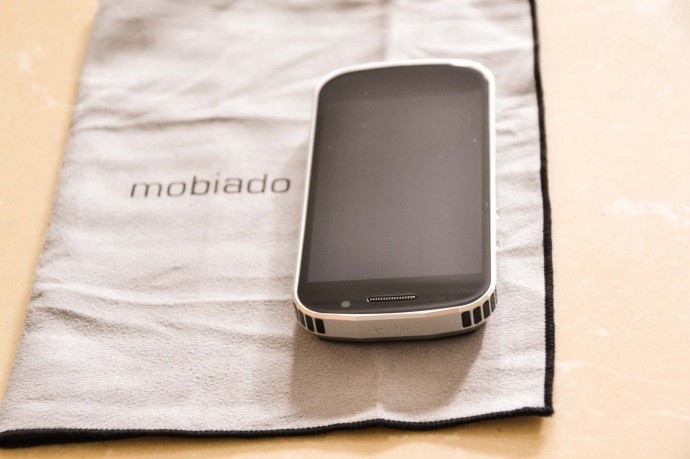 Luxury Quotient – the thing that matters the most
For a premium mobile phone, its luxury quotient is much more important that it the technical specifications and if the handset doesn’t scream of luxury, it’s pretty much useless. But that surely is not the case with Mobiado Grand Touch Silver as the handset strikes the perfect balance between elegance and immaculate design factor. Be it Peter Bonac’s engraved signature, or the anodized aluminum body, every bit of the handset feels premium and the aesthetic features aren’t understated. But if you ask, is it a head turner? To which I’ll say, taste is a subjective matter, but nevertheless, I find the design of the Grand Touch extremely appealing. What I didn’t like is the thickness and the weight of the luxury smartphone. Other than that, I think the phone is lovely. 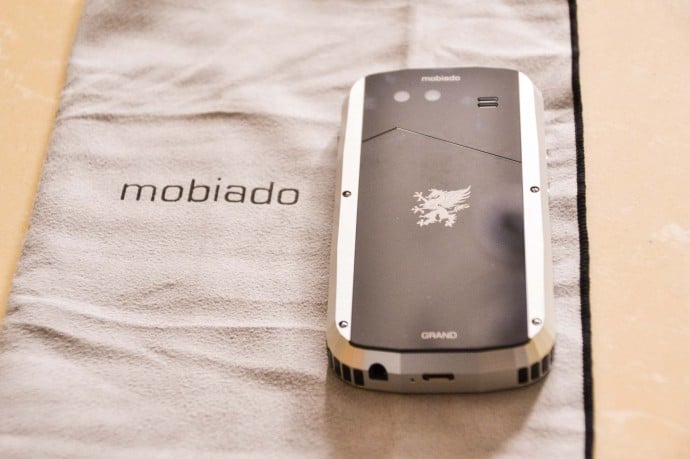 Verdict – is it worth a buy?
So this brings us to the most crucial question, is it worth a buy? Out of the three Mobiado handsets I reviewed, the Grand Touch Silver is the costliest at INR. 4,52,726. But the biggest plus point of the Grand Touch is its relatively newer hardware and software and there is no doubt that the design and build quality is superb which makes the package even more appealing. As compared to the Vertu Constellation, the Mobiado Grand Touch is not only priced considerably lower but also has a much sturdier aluminum chassis. Also the technical specifications are relatively same with the Vertu only slightly better in few aspects. So all in all, the Mobiado Grand Touch does not fail to impress and if you’re in the market looking for a luxury Android smartphone, you should definitely give it a try. 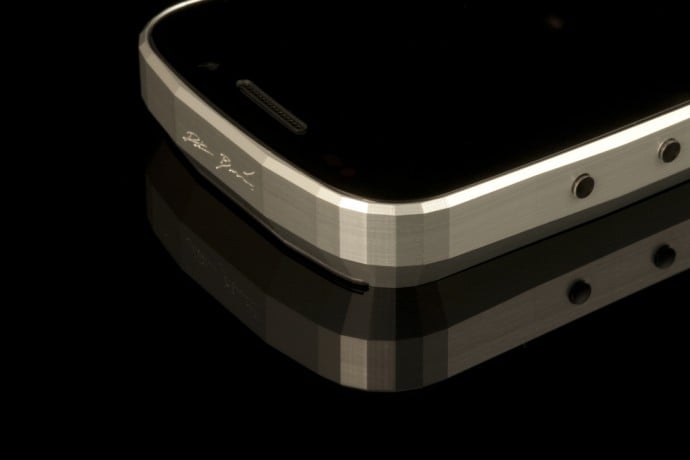