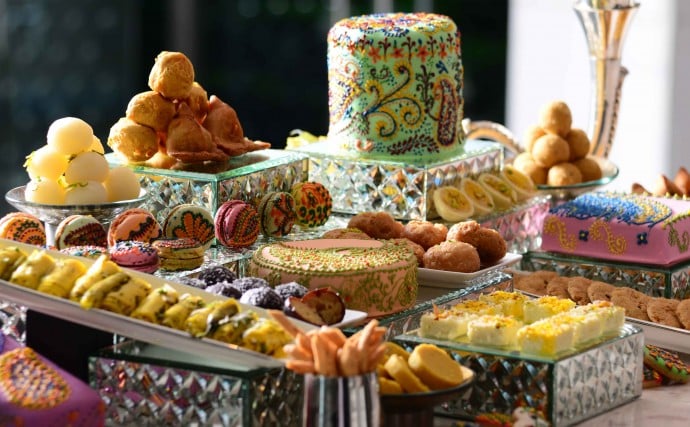 In New Delhi, The Leela Palace is one of the few properties that offer great promise each time they attempt anything new. So when they launched Tea Rhapsody, an afternoon tea serving, besides an innovated western selection, a quintessential tribute to India’s extraordinary celebrated aromas and distinct local specialties, we expected at least a shadow of the grandeur experienced within The Library.

From floor to ceiling windows dispersing late afternoon sunlight to genteel patrons huddled over cups of coffee, and staff that only spoke in hushed tones unless addressed directly, the grandeur was there indeed.

Now a bit about Afternoon Tea, true to British food tradition of when Afternoon Tea became fashionable in the early 19th century, The Qube’s was served at 4 pm to be the east-meets-west treat between lunch and dinner. And while the décor iterated the same mix as in the menu, the high back dining chairs did hark back to the worker’s equivalent of High Tea. As opposed to say low, comfortable, parlor chairs or relaxing in the garden. But when high back chairs come accompanied by chic chandeliers and a view of the garden, even purists can’t be complaining.

Food and Drink
The east-meets-west of the menu lay displayed, almost like a part of the cool ambience, with dedicated selection of cakes, macaroons and cookies adorned with intricate and the daintiest henna patterns.

We had been informed The Tea Rhapsody at The Qube celebrates the time-honored and richly beautiful henna art that is associated with Indian weddings and clearly it did.

And along with that, it honored current eating out trends serving a stunning array of crumbles, scones and mud cakes.

Unfortunately, where presentation triumphed, taste failed. Almost as if adhering to some unwritten New Delhi rule that is somehow still passed amongst bakers, the red velvet was decadently decorated yet dry. The Scones and Cherry Mascarpone Crumble followed suit. It was the other, more experimental creations, which were safe. Like the Gianduja Chocolate Apple Compote (also pictured above) or another berry-cream version, with a tube injected in it for infusing added flavor! The Mango Minestrone, a modern spin on Aamras was like India Extraordinaire with a twist. The savories played the saving grace as well. Methi Matthi, Aloo Bonda, Mirch Vada, Dhokla, Samosas, as well as a selection of petite sandwiches in Indian flavors like Tandoori Chicken and Tandoori Paneer, all made great compliments to the masala chai, served specially for the Tea Rhapsody, in kullads. Those looking for more traditional (read: British) outs can pair an English Breakfast Tea with their western favorites. Almost anything from the beverage menu can be ordered, including single origin coffees, our server said. Recommendations
Kesari Boondi Ladoo, Balu Sahi, Kala Jamun, all make an appearance albeit with Leela flair. So if you have a sweet tooth, we’d say, you’d have better luck with these than the Henna-ed macaroons or cookies.

What you mustn’t miss are the Zucchini, the Smoked Salmon and the Cucumber sandwich.

These are probably the only real contenders from a traditional afternoon tea and whether it’s that or something else, you won’t find them disappointing.

Verdict
While the concept of henna art inspired sweets may strike as innovative, in execution, it seems more like a waste of sugar (forming a remarkably hard, sugary shell) and a chef’s efforts, who might otherwise, be better positioned to work on the scones’ texture, for example. And a good thing that would be, serving perfectly buttery scones at an afternoon tea!
The Afternoon Tea is being served at an introductory price of Rs 1700 for adults and a special price of Rs 900 for children below 12 years of age, for limited period only.