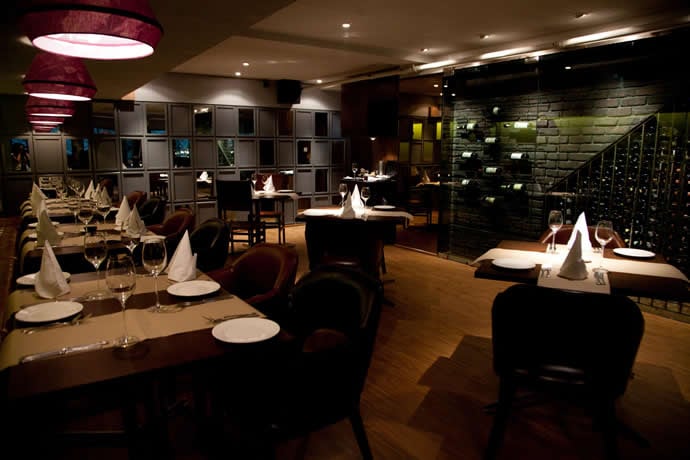 As ‘food’ becomes ‘gastronomy’ which further evolves to ‘avant-garde gastronomy’ globally, let me just risk it all by saying our dining out options are shrinking. Yes, shrinking. If you’re an epicure and a dilliwallah at the same time, you’ll agree that Delhi is experiencing a sudden surge in the number of eateries but that doesn’t necessarily rid you of questionable quality. And at times, even the most trusted reviews don’t help. That’s why we decided to up our eating out ante by introducing a tête-à-tête meal concept. Think of it as a tweaked ‘walk the talk’ where we talk to renowned chefs at their own restaurants, over a food tasting, at times with pairings and give an informed peek that’d likely change dining-as-you-know-it. For our first edition, we headed over to Delhi’s Greater Kailash market to meet Indian celebrity chef and restaurateur Ritu Dalmia over what turned out to be, a six-course food tasting.

The words sound as good as the food tastes 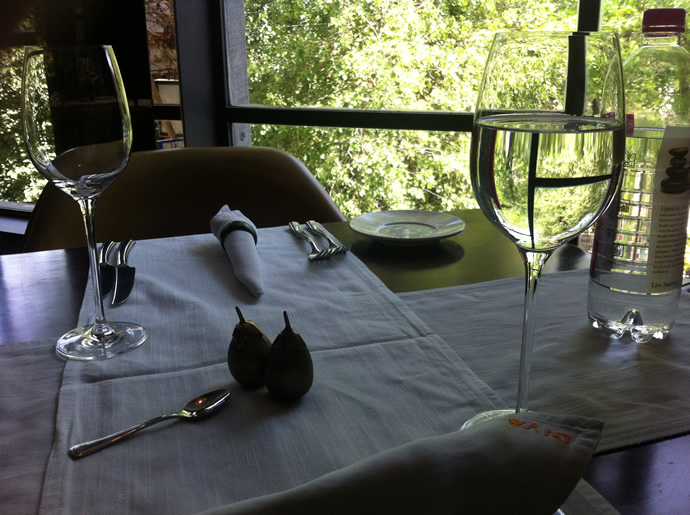 I know you! She almost yelled. And I nearly toppled off in elation that only partly had my wonky heels to hold responsible. Her reaction came courtesy my (late) attendance at a Masterclass of hers in Defence Colony’s Diva Kitsch. “You were late weren’t you?” asked Ritu Dalmia. And that was confirming. This time though, I was on the dot for an interview of hers at G.K. 2’s Diva, The Italian Restaurant and also, the older sibling. Whether or not it was better though would be answered in a few tastings. But let me say one thing- food always tastes better when it comes with a floor-to-ceiling, tree view. Next question, “How old are you?” That was her, of course, asking. 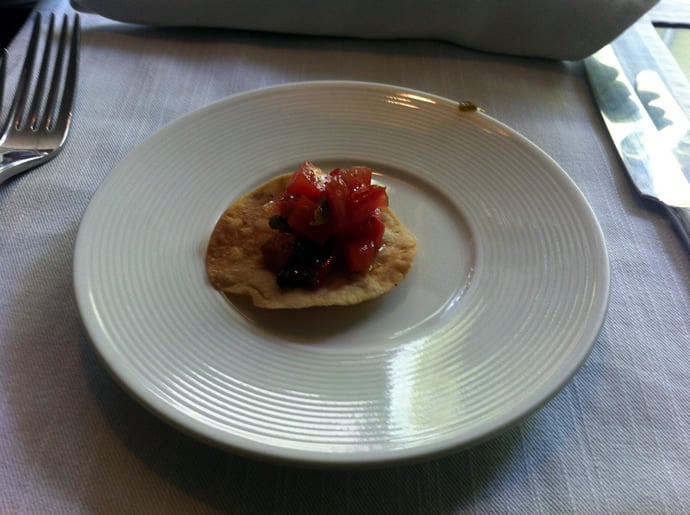 That set the tone for nearly the entirety of my time there. “Shall we start with a glass of Prosecco?” And there was the kind of question I like. As a flute appeared and was filled, she sat on her chair only to get up and smear what she likes to call Tomato chutney on a crisp that had only had a few seconds to look bereft. “It is chutney after all…I do mine in capers’ brine.” You might recognize the topping from the all-too-familiar Tomato Bruschetta or think of it as Italy’s answer to Mexican salsa (although I suspect it might be the other way around). “I was very young when I started” she continued and that’s no secret, fans of the Travelling Diva would know. “I understand you might expect one to be slightly more seasoned” I chimed in, obviously pointing toward myself. “What! I was a genius when I started!” 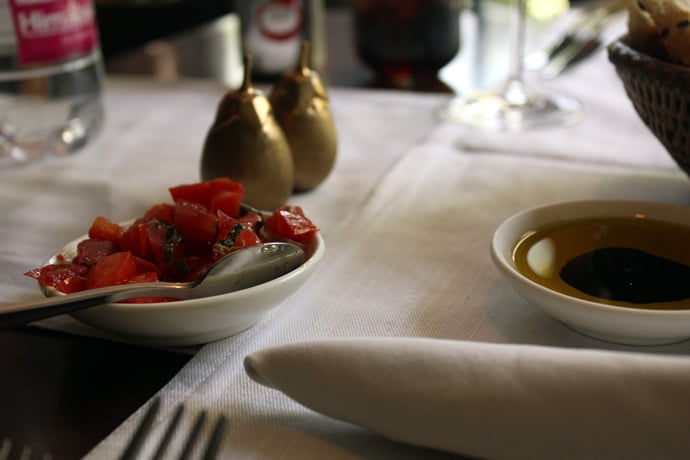 While her first restaurant MezzaLuna wasn’t quite the hit one would associate with Dalmia, given her success, I did not find that answer hard to accept. “Back then, Hauz Khas village was nothing like what it is today,” she went on, suggesting how it was a whole lot better around the 90’s, more alternative. Yet another fact we wont refute. “You must’ve been a kid then,” she smiled switching from pensive to teasing. Out of the urge to confess, I mentioned how I had wiki-ed her (who wouldn’t) only to find “Italian cuisine” is all that’s mentioned in her “Known for” section. That obviously led us on to the subject of her newest Asian offering. The influences of Diva Kitsch’s inception are visible even in the ever-evolving menu of Diva- The Italian Restaurant, I admitted. It was somewhere around this time that the Pizza Portobello made an appearance. 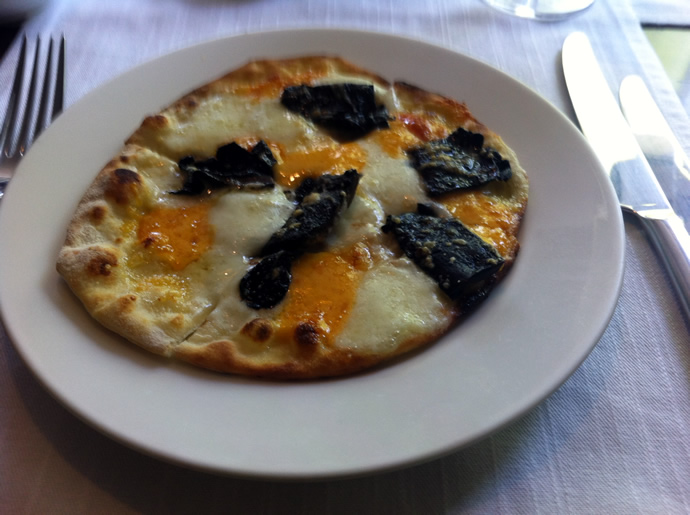 “Ah, you’re going to like this, it’s drizzled with truffle oil, isn’t it?” she looked up, expecting a nod from the manager and acknowledging my previously mentioned penchant for truffles. I’d had my first brush with the fragrant exotic in a spaghetti dish at this very establishment. Which was years and years ago of course and Diva was one of first places in the country importing the luxe ingredient. “We’re sticking to smaller portions for this afternoon,” she continued indicating to the pizza, which was perfect because it was only the start of our six-course food trail. And with the first bite, I realized these were no oily beginnings, despite the generous drizzle. This is probably where ‘quality ingredients’ should take a bow. Dalmia emphasizes on the use of only the freshest ingredients and modern food lore has it that there were days when she’d smuggle in Italian cheese and olive oil.

“Now this dough is as old the restaurant.” Turns out pizza dough not unlike wine betters upon aging, developing tasty sourdough flavors and making each pizza better than the one before it. And in my case, lending the crust the perfect thick versus thin, Napoletana balance. As for the toppings, they were the stuff that Portobello dreams are made of. The mixed cheese helped of course, ensuring the ‘pizze’ wasn’t too chewy even after it got cold. I say “pizze” as a reverential prelude to what followed – the story of a young Dalmia and Italy’s buses. She spoke on how this modest form of travel continues to be the best way to see Italy and Tuscany owing its fame, besides flavors to marketing tactics. 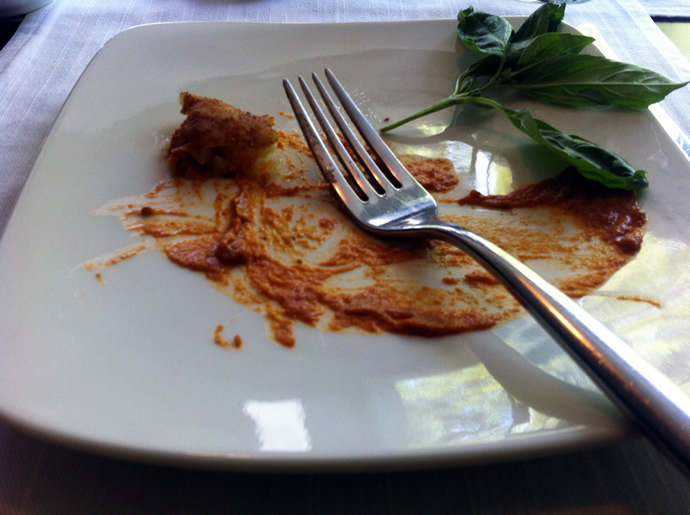 You will love that this recipe is panko crusted but not believe it when I tell you it is leftover-inspired. Once you bite into it of course, as you can see I did and too soon to take a proper photo. But photographing a leftover of a leftover is some kind of unintended karmic justice, is it not? According to Dalmia, a lot of mamas in Sicily’s households make balls of a previous meal’s risotto (the rice is obviously far too disintegrated to reheat and it’d be far too disgraceful to eat it cold), thus, giving them fried identities of their own. Dalmia goes an extra step of course, filling them with tomato, chilly and mozzarella and seating them on a bed of fondant. Now about the fondant, it is just a textural play on the Arrabiata sauce that we so love. All in all, a stylish, multi faceted spin on the ‘pakora’ with a silken glaze that I’d definitely like to see more of. 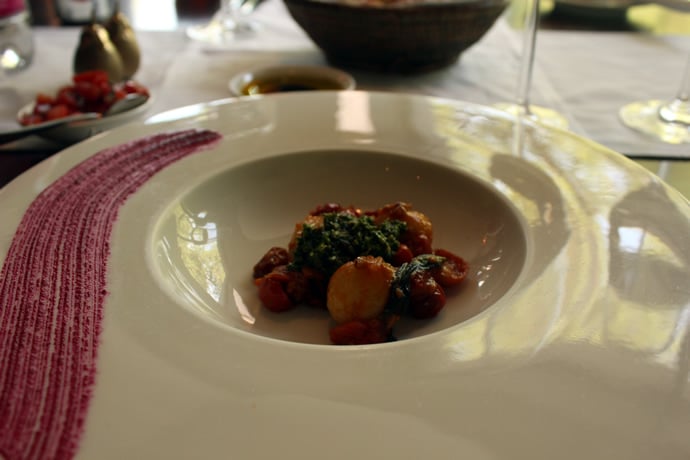 I love gnocchi. I love Scamorza. I love cherry tomato. I love pesto. There was no reason this wasn’t only obviously a delightfully plated hit in my eyes already. “I love color,” explained Dalmia. That too. She continued to explain how beetroot makes countless appearances in her cooking. As does pumpkin. We chatted about how lovely even a ratatouille could turn out with the latter although, she did say, the recipes for the gallic favorite (and eponymous hero of the animated Hollywood hit) varied between regions. She was interrupted then, for nth time if I might add, by a call. Her flourishing catering business is a lesser-known secret that not only dilliwallahs but even overseas clients like to make the most of. 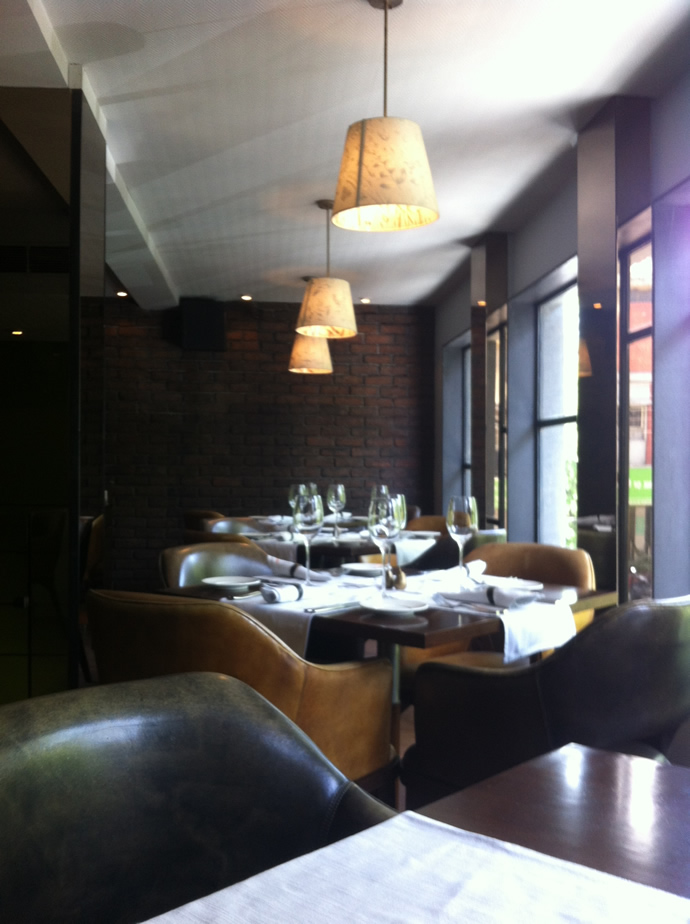 In case you didn’t realize, there’s clearly a lot more of the capital’s favorite chef to discover. Look out for Parte Seconde that comes out tomorrow!