Now, we expect nothing short of a runway spectacle from a brand like Balenciaga. And in delivering just that and more, the marquee put up a show of sorts under the noble direction of Demna Gvasalia at the recently held Paris Fashion Week. The designer who prefers to be termed as a ‘forever refuge’ offered an ode to the ongoing situation between Russia and Ukraine with a dramatic setup on stage. The models – each clad in quirky (and rather skimpy) clothes strutted down a glass-walled snow-space, 60 meters in diameter. 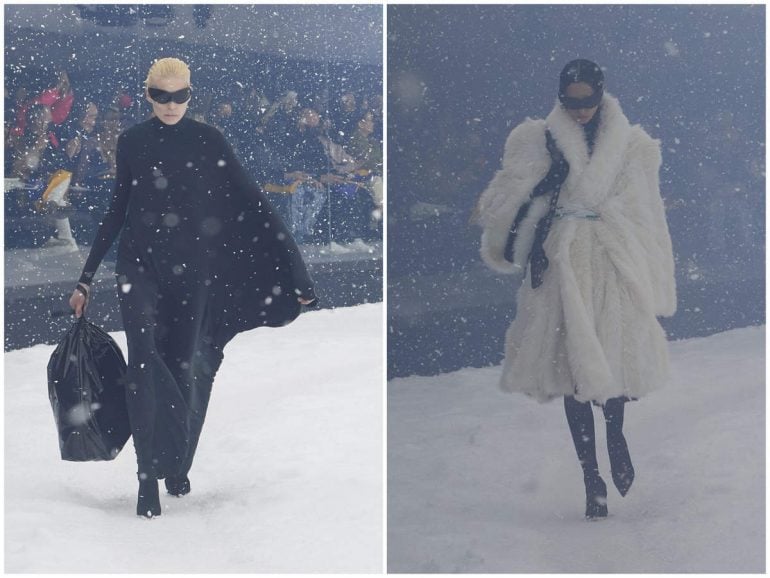 In addition to the aesthetics, every guest at the event was given a yellow and blue Ukrainian flag t-shirt. So much so that Demna, who has himself witnessed the war in the past, recited a poem – in Ukrainian – over loudspeakers to open the show. The poem read as follows: “Until you are bound by chains, and the enemies bind your hands, your faithful sons are standing beside you. With swords in hands-on guard, they swear to live and to die with you. Our native flags, though covered in bloody battles, will never be covered in shame.”

Commenting on the show, the designer added, “This week, I saw myself in the past from 30 years ago in a shelter like some Ukrainian boys and girls today. Not knowing if the ceiling was about to fall. So, these half-naked people making their way through the wind are very personal.”

When asked if he has any message for Putin, he further said, “My only message is this show. And the fact that only innocent people suffer. Those that die in the war. I have experienced that. I blocked it out of my mind for 30 years. But recent events have brought all this pain back. So, the message is that what matters in life is life itself; human love and compassion… Fashion somehow doesn’t matter right now.”

Tags from the story
Balenciaga