Car companies are known for their collaborations with fashion brands especially when it comes to footwear and accessories. However, nothing could have prepared us for the news that German car company Audi and California based Toms have joined hands over a collaborative project! The result is a slip on grey shoe with contrast red stitching and a tiny tag with Audi’s linked rings logo. Apart from the subtle branding and use of Audi colors, the shoes don’t feature any car-inspired details which was probably an intentional break from the norm considering other car/shoe collaborations are usually heavy on the brand association.

The exclusivity of the shoes is probably the selling point here, as you cannot purchase these limited edition shoes on their own. As part of Audi’s Summer of Audi sales (from June 3 to Aug 4 in the U.S.), you can only get these shows if you buy or lease an Audi car through the promotion. Toms is well known for their charity work and will donate 55,000 pairs of shoes to children in need as part of the promotion. 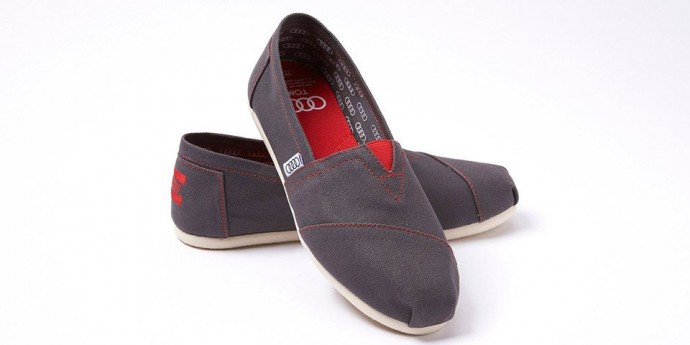 We suspect that the idea of this promotion is not to steal attention, but to make a statement for the benefit of only those who would know about the collaboration – i.e. true Audi fans.

Tags from the story
Audi, Shoes