Instead of being dressed to kill, you can be dressed to not be killed by Miguel Caballero, the self-described ‘Armani of bulletproof clothing.’ This is the ultimate fashion statement that will not only be the envy of all your friends but will protect you from all of your enemies (like jilted lovers, ex-spouses, or rabid neo-cons) who would like to see you dead. Caballero sells a line of armored clothing that fits like Armani but deflects point-blank gunfire like the Popemobile. Instead of heavier Kevlar materials for armored lining, Caballero developed and patented a weave of nylon and polyester that can stand up to gunfire. The fashions cost between $500 and $2,000 each. The weight of a protective jacket has been brought down from 4.5 kilos 10 years ago to 1.2. It can withstand ammunition from weapons including a 9mm, a .44 Magnum, and a 3.57 revolver. 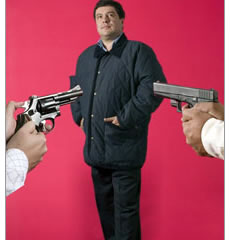 Last year the 38-year-old entrepreneur sold an estimated $7 million worth of bulletproof trench coats, business suits, suede jackets, and denim casuals to executives, political leaders, undercover agents, and other VIPs – people who demand more than a bodyguard for protection and don’t like the bulk or SWAT-team look of flak jackets and vests. His clientele includes A-list customers like Presidents Alvaro Uribe of Colombia and Hugo Chávez of Venezuela, who each own a bulletproof guayabera, a thin cotton shirt common in the Caribbean. In August, Caballero is opening a high-end boutique in one of Mexico City’s most exclusive shopping districts with neighbors like Armani, Cartier, Louis Vuitton, and Tiffany. His future plans aim at the fairer sex – A line of bulletproof women’s wear, from evening gowns to blouses.
Source