‘Randoseru’ is the cute sturdy, box-shaped backpack that is part of Japanese custom for elementary school kids to carry as part of their uniform; that also has has people all around the world wishing that they could go back to being first graders, including actress-singer Zooey Deschanel. So it doesn’t come as a surprise that, Disney, being the biggest worldwide producer of children’s entertainment and has decided to shift gears and get into the Randoseru game as well!

The backpacks have been part of school-going tradition since 1887 and have now grown to be a big fashion symbol for prepubescent children; which is what makes it a good investment for the global conglomerate. Disney has given the traditional backpack a makeover in girly colors like pearl pink, regular pink, lavender, and brown. There also happens to be a black one for the boys. The brown, pink and lavender have Minnie Mouse embroidered on the flap; while the pearl pink one is inspired by the Disney Princesses and is a special edition. The boy’s black randoseru has a classic Mickey Mouse embroidered, and though the boys lack options to choose from, Disney makes up for it on the inside with metal fastenings and intricate details. 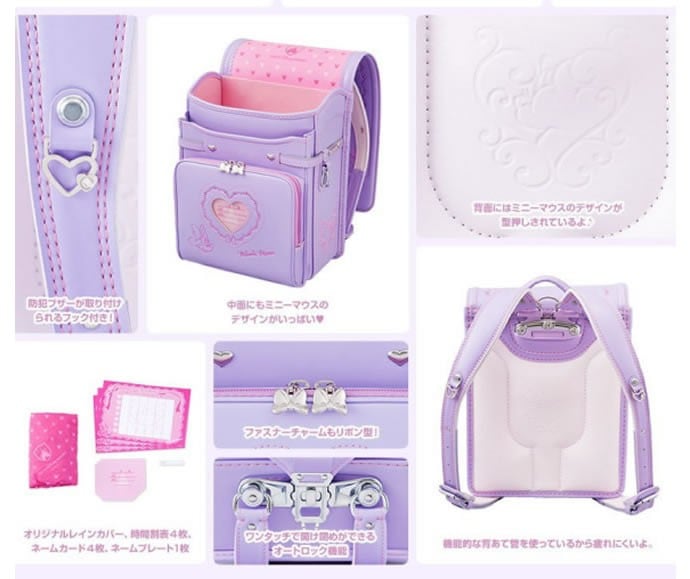 Since the bags are usually hand made, Disney is taking orders till 31st October for next year March’16 deliveries. But wait, there’s s downside! Disney is only excepting orders in person at the Tokyo Disneyland and Tokyo Disney Sea; which means, to invest in your kid’s future fashion sense, you’re going to have to spend $60 (¥ 6,900) for entrance fee to the Disney parks plus the actual amounts for the bags which retail at $470 for the regular ones and $610 for the exclusive Disney Princess version. That might add up, but on the brighter side, your kid gets to visit Disney and will probably be the best dressed in his/her class. How exciting is that!

P.S. Maybe now would be a good time to tell your kids that Santa isn’t really, and get them to forget about gifts entirely for the next 6 years!

Tags from the story
Disney, Japan