An outdoor scene was built inside the Grand Palais to function as a runway complete with grass and a blue sky. Models emerged from a central wooden house and walked along inlaid wood paths through the grass. “Fashion is part of the events of our times,” declared Karl Lagerfeld about the Zen-like, eco-conscious serenity of the Chanel Haute Couture collection in the Grand Palais. 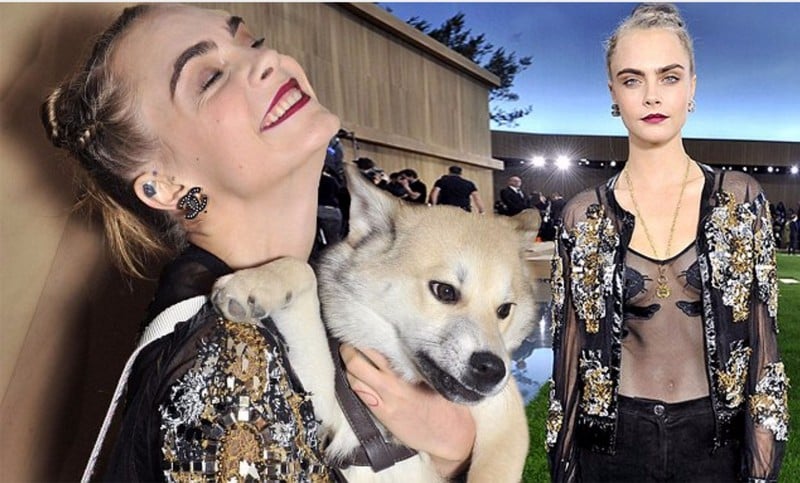 Cara Delevingne sported a full Chanel look that was decidedly hard-edged, but Leo’s look was playful but this slightly bizarre presence added a touch of sweetness. Clad in a transparent sequin-covered bomber and gold chain–adorned combat boots. But who is this Leo? High-profile animals like Choupette Lagerfeld and Neville Jacobs may rule Instagram, but rarely do they join their famous parents in the front row. But Cara Delevinge broke the rule! Yes, she appeared with a special friend in row : her adopted mix breed pup, Leo. 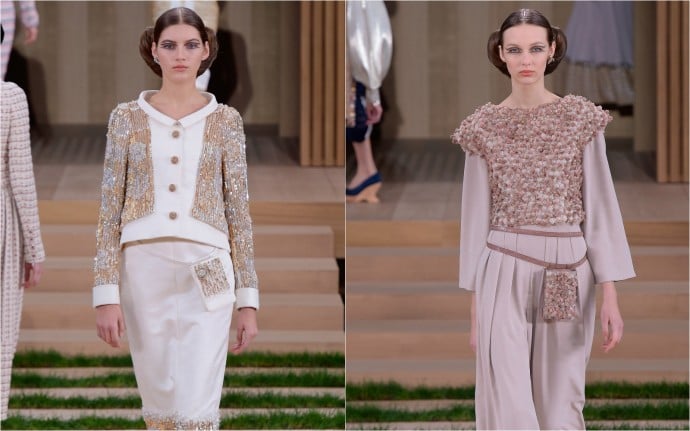 One prominent silhouette of the collection was a long-lean skirt, cut mid-shin and worn with a rounded sleeve jacket. Accompanying many of these ensembles was a loosely tied belt bag for an iPhone as well as tablet. What was very remarkable that every silhouette even in different colours featured the same round tea cork wedge with a curved heel. Models’ hair was swept into a wide twist along the back of their heads vraiment a “Chanel croissant,” per hairstylist Sam McKnight while their beauty look consisted of two elongated strokes of eyeliner framing the eye. 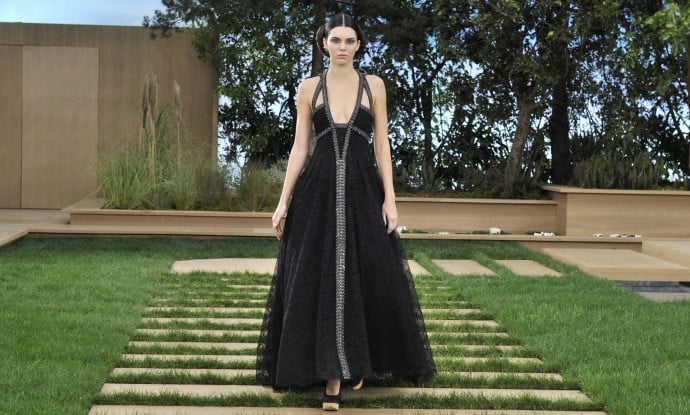 With the Oscars a month away, evening wear is front of mind at haute couture week. Lagerfeld dressed two of the supermodels of the moment, Kendall Jenner and Gigi Hadid, in looks designed to catch the eye of red carpet contenders including Diane Kruger and Gwyneth Paltrow, in the front row. It was the perfect backdrop for Lagerfeld to apply the skills of his couture ateliers to making beautiful clothes out of natural, sustainable materials. This Summer 2016 two-tone slingback sandals came not in leather, but in environmentally friendly cork. A skirt was woven out of jute, and embroidery fashioned from tiny paillettes of wood. 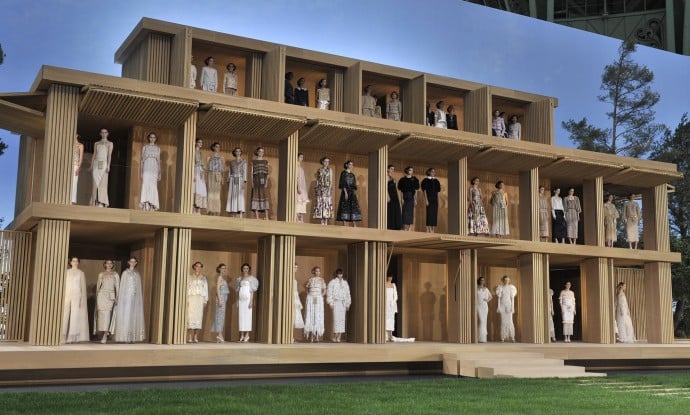 At the end of the show, the wooden slats of the house opened to reveal a tableau of models on different levels. Lagerfeld emerged in the front holding hands with his bride for a brief moment. As the bride, Mica Arganaraz wore a blush, textured floral column dress with a long train topped off with a very wedding-appropriate hoodie.

READ:  Louis Vuitton will now let you customise new and old trunks by hand painting them for you!

It seemed incredible that the same venue had been transformed into a convincing casino “ Chanel Airport” for the last couture show which was a tribute to the set-design genius at Chanel and just as incredible that this time, the gambling chips had been replaced by . eco-friendly elements such as wood chips.

After all Coco Chanel rightly said “Fashion is not something that exists in dresses only. Fashion is in the sky, in the street, fashion has to do with ideas, the way we live, what is happening” Future trend fashion could be on a climate change agenda