While the odds of you getting hit by lightning is approximately one to one octillion, Dutch designer Anouk Wipprecht and music performance group Arcattack have created a wearable a metal dress that discharges one million volts of electricity. Part futuristic, part anime-meets-high fashion, the dress comprises metal plates, 600 rings of chain mail, 3D ‘plasma ball’ mounts on the shoulders and a spiked helmet with a grille on the front.

The designer Anouk Wipprecht wore the dress at the Maker Faire Bay Area 2014 show and conducted almost half a million volts as she stood between the coils. Two Tesla coils that can send electrical arcs up to twelve feet long were employed to demonstrate the garment’s potential. A Tesla coil is an electrical resonant circuit that produces high-voltage, low-current, high frequency electricity while the chainmail acts like a faraday cage to push the charge to the floor, which protected Wipprecht from the electricity. 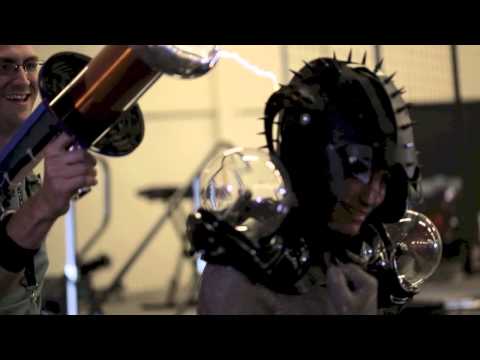 Interestingly, Wipprecht had to wear the 94-paneled dress herself as none of the models wanted to wear a costume exuding electrical current. Any takers for the electrifying haute couture?

Tags from the story
Dress