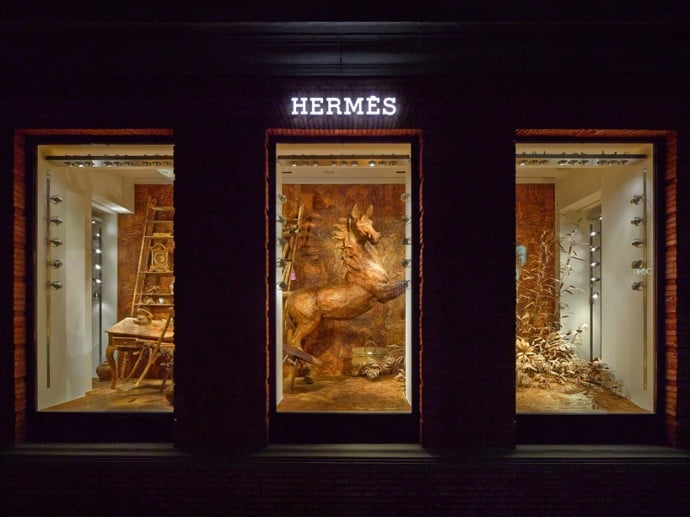 Following the opening of its stunning new flagship store in Shanghai, luxury fashion and lifestyle brand Hermès have roped in Dutch artist Levi van Veluw to create a unique and relevant display that depicts the different stages in the journey of a horse. Consisting of three panels, the display is crafted entirely of wood veneer and tells a charming story of a horse crossing through exotic lands to deliver Hermès items from an atelier in France to China. The display is heavy with symbolism with the horse being traditionally associated with warmth and intelligence; it may also be an allusion to Hermès’ history of creating beautiful equestrian good and accessories.
Each piece in the window has been handcrafted by Van Veluw whose body of work consists of an array of thought provoking sculptures, installations, drawings, photos and videos. The warmth and intricacy of the carved wood elements of this display translate beautifully into a cohesive fairy-tale that is reflective of the relationship between China’s tradition and Hermès.

This is not the first time the luxury brand has wowed us with their impressive window display, back in July, their Barcelona store boasted a similarly creative display that was crafted entirely from paper! Whatever will Hermès think of next?

Tags from the story
Hermes, Shanghai